“NASA’s Mars Exploration Program keeps bringing us closer to determining whether the Red Planet could harbor life in some form,” NASA Administrator Charles Bolden said, “and it reaffirms Mars as an important future destination for human exploration.”

Dark, finger-like features appear and extend down some Martian slopes during late spring through summer, fade in winter, and return during the next spring. Repeated observations have tracked the seasonal changes in these recurring features on several steep slopes in the middle latitudes of Mars’ southern hemisphere.

“The best explanation for these observations so far is the flow of briny water,” said Alfred McEwen of the University of Arizona, Tucson. McEwen is the principal investigator for the orbiter’s High Resolution Imaging Science Experiment (HiRISE) and lead author of a report about the recurring flows published in Thursday’s edition of the journal Science. 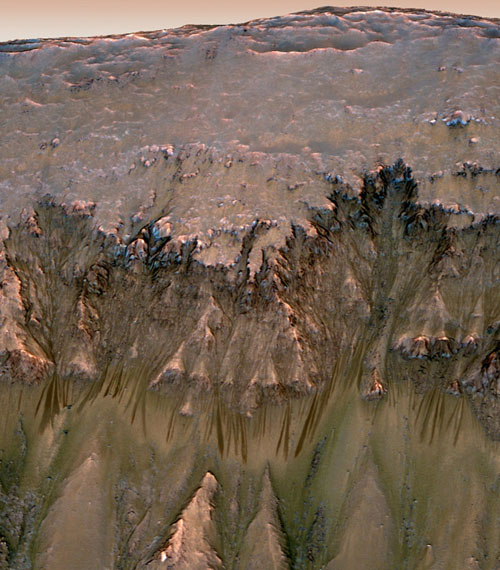 An image combining orbital imagery with 3-D modeling shows flows that appear in spring and summer on a slope inside Mars' Newton crater. Image credit: NASA/JPL-Caltech/Univ. of Arizona

Some aspects of the observations still puzzle researchers, but flows of liquid brine fit the features’ characteristics better than alternate hypotheses. Saltiness lowers the freezing temperature of water. Sites with active flows get warm enough, even in the shallow subsurface, to sustain liquid water that is about as salty as Earth’s oceans, while pure water would freeze at the observed temperatures.

“These dark lineations are different from other types of features on Martian slopes,” said Mars Reconnaissance Orbiter Project Scientist Richard Zurek of NASA’s Jet Propulsion Laboratory in Pasadena, Calif. “Repeated observations show they extend ever farther downhill with time during the warm season.”

The features imaged are only about 0.5 to 5 yards or meters wide, with lengths up to hundreds of yards. The width is much narrower than previously reported gullies on Martian slopes. However, some of those locations display more than 1,000 individual flows. Also, while gullies are abundant on cold, pole-facing slopes, these dark flows are on warmer, equator-facing slopes.

The images show flows lengthen and darken on rocky equator-facing slopes from late spring to early fall. The seasonality, latitude distribution and brightness changes suggest a volatile material is involved, but there is no direct detection of one. The settings are too warm for carbon-dioxide frost and, at some sites, too cold for pure water. This suggests the action of brines, which have lower freezing points. Salt deposits over much of Mars indicate brines were abundant in Mars’ past. These recent observations suggest brines still may form near the surface today in limited times and places.

When researchers checked flow-marked slopes with the orbiter’s Compact Reconnaissance Imaging Spectrometer for Mars (CRISM), no sign of water appeared. The features may quickly dry on the surface or could be shallow subsurface flows.

“The flows are not dark because of being wet,” McEwen said. “They are dark for some other reason.”

A flow initiated by briny water could rearrange grains or change surface roughness in a way that darkens the appearance. How the features brighten again when temperatures drop is harder to explain.

“It’s a mystery now, but I think it’s a solvable mystery with further observations and laboratory experiments,” McEwen said.

These results are the closest scientists have come to finding evidence of liquid water on the planet’s surface today. Frozen water, however has been detected near the surface in many middle to high-latitude regions. Fresh-looking gullies suggest slope movements in geologically recent times, perhaps aided by water. Purported droplets of brine also appeared on struts of the Phoenix Mars Lander. If further study of the recurring dark flows supports evidence of brines, these could be the first known Martian locations with liquid water.

The Mars Reconnaissance Orbiter is managed by JPL for NASA’s Science Mission Directorate in Washington. The University of Arizona’s Lunar and Planetary Laboratory operates HiRISE. The camera was built by Ball Aerospace & Technologies Corp. in Boulder, Colo. Johns Hopkins University Applied Physics Laboratory in Laurel, Md., provided and operates CRISM. JPL is a division of the California Institute of Technology in Pasadena.

For more information about the Mars Reconnaissance Orbiter, visit: https://www.nasa.gov/mro and https://marsprogram.jpl.nasa.gov/mro/ .