PASADENA, Calif. –– New observations by NASA’s Wide-field Infrared Survey Explorer, or WISE, show there are significantly fewer near-Earth asteroids in the mid-size range than previously thought. The findings also indicate NASA has found more than 90 percent of the largest near-Earth asteroids, meeting a goal agreed to with Congress in 1998.

Astronomers now estimate there are roughly 19,500 — not 35,000 — mid-size near-Earth asteroids. Scientists say this improved understanding of the population may indicate the hazard to Earth could be somewhat less than previously thought. However, the majority of these mid-size asteroids remain to be discovered. More research also is needed to determine if fewer mid-size objects (between 330 and 3,300-feet wide) also mean fewer potentially hazardous asteroids, those that come closest to Earth.

The results come from the most accurate census to date of near-Earth asteroids, the space rocks that orbit within 120 million miles (195 million kilometers) of the sun into Earth’s orbital vicinity. WISE observed infrared light from those in the middle to large-size category. The survey project, called NEOWISE, is the asteroid-hunting portion of the WISE mission. Study results appear in the Astrophysical Journal. 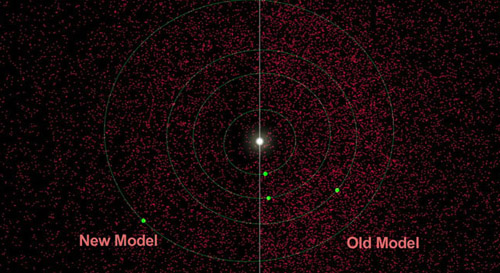 NEOWISE observations indicate that there are at least 40 percent fewer near-Earth asteroids in total that are larger than 330 feet, or 100 meters. Our solar system's four inner planets are shown in green, and our sun is in the center. Each red dot represents one asteroid. Object sizes are not to scale. Image credit: NASA/JPL-Caltech

“NEOWISE allowed us to take a look at a more representative slice of the near-Earth asteroid numbers and make better estimates about the whole population,” said Amy Mainzer, lead author of the new study and principal investigator for the NEOWISE project at NASA’s Jet Propulsion Laboratory in Pasadena, Calif. “It’s like a population census, where you poll a small group of people to draw conclusions about the entire country.”

WISE scanned the entire celestial sky twice in infrared light between January 2010 and February 2011, continuously snapping pictures of everything from distant galaxies to near-Earth asteroids and comets. NEOWISE observed more than 100 thousand asteroids in the main belt between Mars and Jupiter, in addition to at least 585 near Earth. 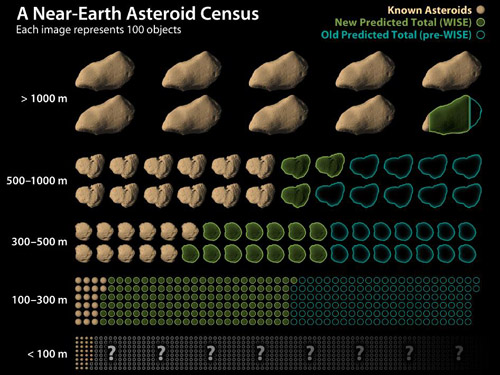 This chart shows how data from NASA's Wide-field Infrared Survey Explorer, or WISE, has led to revisions in the estimated population of near-Earth asteroids. Image credit: NASA/JPL-Caltech

WISE captured a more accurate sample of the asteroid population than previous visible-light surveys because its infrared detectors could see both dark and light objects. It is difficult for visible-light telescopes to see the dim amounts of visible-light reflected by dark asteroids. Infrared-sensing telescopes detect an object’s heat, which is dependent on size and not reflective properties.

Though the WISE data reveal only a small decline in the estimated numbers for the largest near-Earth asteroids, which are 3,300 feet (1 kilometer) and larger, they show 93 percent of the estimated population have been found. This fulfills the initial “Spaceguard” goal agreed to with Congress. These large asteroids are about the size of a small mountain and would have global consequences if they were to strike Earth. The new data revise their total numbers from about 1,000 down to 981, of which 911 already have been found. None of them represents a threat to Earth in the next few centuries. It is believed that all near-Earth asteroids approximately 6 miles (10 kilometers) across, as big as the one thought to have wiped out the dinosaurs, have been found. 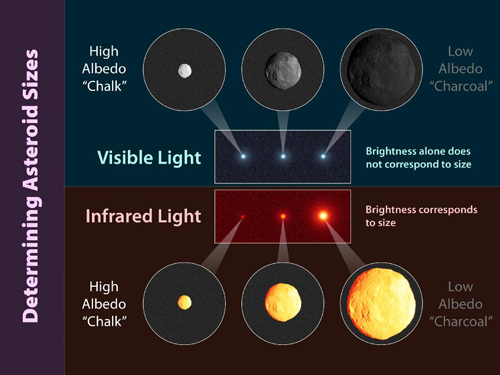 “The risk of a really large asteroid impacting the Earth before we could find and warn of it has been substantially reduced,” said Tim Spahr, the director of the Minor Planet Center at the Harvard Smithsonian Center for Astrophysics in Cambridge, Mass.

The situation is different for the mid-size asteroids, which could destroy a metropolitan area if they were to impact in the wrong place. The NEOWISE results find a larger decline in the estimated population for these bodies than what was observed for the largest asteroids. So far, the Spaceguard effort has found and is tracking more than 5,200 near-Earth asteroids 330 feet or larger, leaving more than an estimated 15,000 still to discover. In addition, scientists estimate there are more than a million unknown smaller near-Earth asteroids that could cause damage if they were to impact Earth.

“NEOWISE was just the latest asset NASA has used to find Earth’s nearest neighbors,” said Lindley Johnson, program executive for the Near Earth Object Observation Program at NASA Headquarters in Washington. “The results complement ground-based observer efforts over the past 12 years. These observers continue to track these objects and find even more.”

WISE is managed and operated by JPL for NASA’s Science Mission Directorate in Washington. The principal investigator, Edward Wright, is at the University of California, Los Angeles. The WISE science instrument was built by the Space Dynamics Laboratory in Logan, Utah, and the spacecraft was built by Ball Aerospace and Technologies Corp. in Boulder, Colo. Science operations and data processing occur at the Infrared Processing and Analysis Center at the California Institute of Technology.

For more information about the mission, visit: https://www.nasa.gov/wise .