NASA Set for a Big Year in Earth Science

For the first time in more than a decade, five NASA Earth science missions will be launched into space in the same year, opening new and improved remote eyes to monitor our changing planet.

The five launches, including two to the International Space Station (ISS), are part of an active year for NASA Earth science researchers, who also will conduct airborne campaigns to the poles and hurricanes, develop advanced sensor technologies, and use satellite data and analytical tools to improve natural hazard and climate change preparedness.

“As NASA prepares for future missions to an asteroid and Mars, we’re focused on Earth right now,” said NASA Administrator Charles Bolden. “With five new missions set to launch in 2014, this really is shaping up to be the year of the Earth, and this focus on our home planet will make a significant difference in people’s lives around the world.” 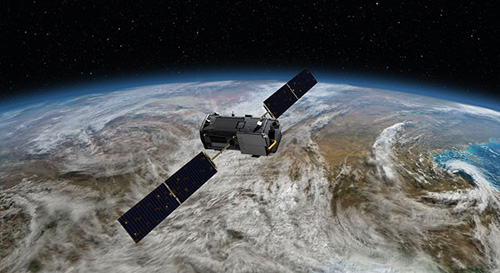 Artist’s rendering of NASA’s Orbiting Carbon Observatory (OCO)-2, one of five new NASA Earth science missions set to launch in 2014, and one of three managed by JPL. Image credit: NASA-JPL/Caltech

The GPM Core Observatory is scheduled to launch on Feb. 27 from JAXA’s Tanegashima Space Center on a Japanese H-IIA rocket. The spacecraft was built at NASA’s Goddard Space Flight Center, Greenbelt, Md.

In July, NASA will launch a mission to advance our understanding of carbon dioxide’s role in climate change. The Orbiting Carbon Observatory (OCO)-2, a replacement for a mission lost after a launch vehicle failure in 2009, will make precise, global measurements of carbon dioxide, the greenhouse gas that is the largest human-generated contributor to global warming. OCO-2 observations will be used to improve understanding of the natural and human-induced sources of carbon dioxide and how these emissions cycle through Earth’s oceans, land and atmosphere.

OCO-2, managed by NASA’s Jet Propulsion Laboratory in Pasadena, Calif., will launch from Vandenberg Air Force Base, Calif., on a Delta II rocket.

With the November launch of NASA’s Soil Moisture Active Passive (SMAP) mission, NASA will track Earth’s water into one of its last hiding places: the soil. SMAP will map Earth’s soil moisture and provide precise indications of the soil’s freeze-thaw state, to improve understanding of the cycling of water, energy and carbon. High-resolution global maps of soil moisture produced from SMAP data will inform water resource management decisions on water availability around our planet. SMAP data also will aid in predictions of plant growth and agricultural productivity, weather and climate forecasts, and monitoring floods and droughts.

SMAP, a JPL-managed mission, will launch from Vandenberg onboard a Delta II rocket.

“On our home planet Earth, water is an essential requirement for life and for most human activities. We must understand the details of how water moves within and between the atmosphere, the oceans and the land if we are to predict changes to our climate and the availability of water resources,” said Michael Freilich, director of NASA’s Earth Science Division in Washington. “Coupled with data from other ongoing NASA missions that measure sea-surface salinity and that detect changes in underground aquifer levels, with GPM and SMAP we will have unprecedented measurements of our planet’s vital water cycle.”

Two Earth science missions will be sent to the International Space Station this year to measure ocean winds, clouds and aerosols, marking NASA’s first use of the orbiting laboratory as a 24/7 Earth-observing platform. The new instruments are the first of a series that will observe Earth routinely from the orbiting laboratory.

The space station has served as a unique platform advancing scientific research and technological discovery for more than 13 years. Its mid-inclination orbit allows for observations at all local times over nearly 85 percent of Earth’s surface. NASA plans to launch five Earth-observing instruments to the ISS through 2017. These missions are developed and operated jointly by the International Space Station Program and the Earth Science Division.

ISS-RapidScat, managed by JPL and scheduled to launch to the station June 6, will extend the data record of ocean winds around the globe. These data are a key factor in climate research, weather and marine forecasting, and tracking of storms and hurricanes. Using inherited, repurposed hardware, ISS-RapidScat will provide high-value science at a fraction of the typical cost of developing a free-flying satellite. ISS-Rapidscat will fly to the station aboard a SpaceX Falcon 9 rocket and Dragon cargo spacecraft from Cape Canaveral Air Force Station, Fla., on a commercial resupply flight for the ISS.

“With these two instruments launching to the space station, ISS will come into its own as an important platform for studying the Earth system and global change,” said Julie Robinson, space station chief scientist at NASA’s Johnson Space Center in Houston. “This is just the beginning of the space station becoming a part of the global Earth-observing network.”

Putting satellite data to work meeting local and regional needs around the world is another part of NASA’s Earth science mission. In 2014, projects sponsored by the NASA Applied Sciences Program will tackle ecosystem issues in the Gulf of Mexico, water scarcity in the U.S. Southwest, and flood management in the Mekong River delta.

NASA continues to push the boundaries of current technologies to find new ways to see our complex planet in more detail and with greater accuracy. This year, NASA’s Earth Science Technology Office will test new sensors to improve measurements of water levels in lakes and reservoirs, carbon dioxide, terrestrial ecosystems, and natural hazards such as earthquakes and tsunamis.