NASA Says Comet Elenin Gone and Should Be Forgotten

Comet Elenin is no more.

Latest indications are this relatively small comet has broken into even smaller, even less significant, chunks of dust and ice. This trail of piffling particles will remain on the same path as the original comet, completing its unexceptional swing through the inner solar system this fall.

“Elenin did as new comets passing close by the sun do about two percent of the time: It broke apart,” said Don Yeomans of NASA’s Near-Earth Object Program Office at NASA’s Jet Propulsion Laboratory in Pasadena, Calif. “Elenin’s remnants will also act as other broken-up comets act. They will trail along in a debris cloud that will follow a well-understood path out of the inner solar system. After that, we won’t see the scraps of comet Elenin around these parts for almost 12 millennia.”

Twelve millennia may be a long time to Earthlings, but for those frozen inhabitants of the outer solar system who make this commute, a dozen millennia give or take is a walk in the celestial park.  Comet Elenin came as close as 45 million miles (72 million kilometers) to the sun, but it arrived from the outer solar system’s Oort Cloud, which is so far away its outer edge is about a third of the way to the nearest star other than our sun. 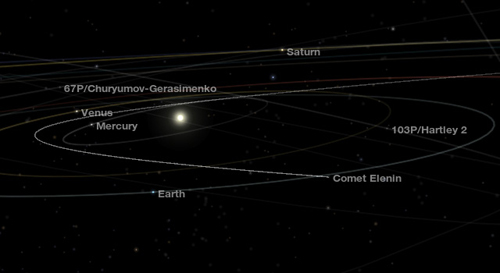 For those broken up over the breakup of what was formerly about 1.2 miles (2 kilometers) of uninspiring dust and ice, remember what Yeomans said about comets coming close to the sun – they fall apart about two percent of the time.

“Comets are made up of ice, rock, dust and organic compounds and can be several miles in diameter, but they are fragile and loosely held together like dust balls,” said Yeomans. “So it doesn’t take much to get a comet to disintegrate, and with comets, once they break up, there is no hope of reconciliation.”

Comet Elenin first came to light last December, when sunlight reflecting off the small comet was detected by Russian astronomer Leonid Elenin of Lyubertsy, Russia. Also known by its astronomical name, C/2010 X1, Elenin somehow quickly became something of a “cause célèbre” for a few Internet bloggers, who proclaimed this minor comet could/would/should be responsible for causing any number of disasters to befall our planet.

Internet posts began appearing, many with nebulous, hearsay observations and speculations about earthquakes and other disasters being due to Elenin’s gravitational effects upon Earth. NASA’s response to such wild speculations was then in turn speculated to be an attempt to hide the truth.

“I cannot begin to guess why this little comet became such a big Internet sensation,” said Yeomans. “The scientific reality is this modest-sized icy dirtball’s influence upon our planet is so incredibly minuscule that my subcompact automobile exerts a greater gravitational influence on Earth than the comet ever would. That includes the date it came closest to Earth (Oct. 16), when the comet’s remnants got no closer than about 22 million miles (35.4 million kilometers).”

Yeomans knows that while Elenin may be gone, there will always be Internet rumors that will attempt to conjure up some form of interplanetary bogeyman out of Elenin, or some equally obscure and scientifically uninteresting near-Earth object.  Thinking of ways to make himself any more clear about the insignificance of this matter is somewhat challenging for a scientist who has dedicated his life to observing asteroids and comets and discovering their true nature and effects on our solar system.

“Perhaps a little homage to a classic Monty Python dead parrot sketch is in order,” said Yeomans. “Comet Elenin has rung down the curtain and joined the choir invisible. This is an ex-comet.”

NASA detects, tracks and characterizes asteroids and comets passing relatively close to Earth using both ground- and space-based telescopes. The Near-Earth Object Observations Program, commonly called “Spaceguard,” discovers these objects, characterizes the physical nature of a subset of them, and predicts their paths to determine if any could be potentially hazardous to our planet.  There are no known credible threats to date.

More information about asteroids and near-Earth objects is at: https://www.jpl.nasa.gov/asteroidwatch , and on Twitter: @asteroidwatch .