March 17 marks St. Patrick’s Day — a day when shamrocks, Ireland and “wearing of the green” are especially en vogue. To celebrate this festive occasion, NASA’s Aqua satellite has picked a clover of different views of the Emerald Isle, Ireland.

The AIRS instrument measures temperatures of land, sea and air to provide a better understanding of what is happening in those environments. 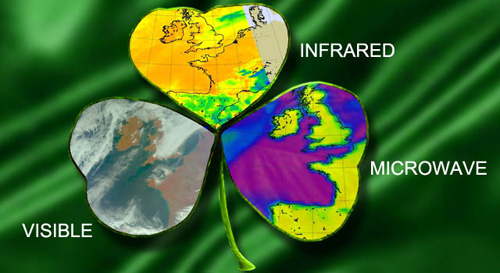 This collection of AIRS images of Ireland positioned in the shape of a clover include visible (left), infrared (center) and microwave (right). They were captured from the AIRS instrument onboard NASA's Aqua satellite on March 3, 2011 and revealed a land surface temperature near 50F (10C). Image credit: NASA/JPL-Caltech

The clover of AIRS images reveal temperatures near Earth’s surface that were near normal for this time of year. The visible image showed a mostly cloud-free country blanketed by an approaching cold front. The infrared image showed low western clouds associated with a cold front moving east. The microwave brightness temperature data are a bit colder than the infrared temperature data, 273 Kelvin, which is just at the freezing point of water (0 degrees Celsius, or 32 degrees Fahrenheit).

For more information about these images, visit: https://www.nasa.gov/topics/earth/features/aqua-clover.html .