The NASA Mars rover Opportunity has gained a view of Endeavour crater from barely more than a football-field’s distance away from the rim. The rim of Endeavour has been the mission’s long-term goal since mid-2008.

Endeavour offers the setting for plenty of productive work by Opportunity. The crater is 14 miles (22 kilometers) in diameter — more than 25 times wider than Victoria crater, an earlier stop that Opportunity examined for two years. Observations by orbiting spacecraft indicate that the ridges along Endeavour’s western rim expose rock outcrops older than any Opportunity has seen so far. The selected location for arrival at the rim, “Spirit Point,” is at the southern tip of one of those ridges, “Cape York,” on the western side of Endeavour. 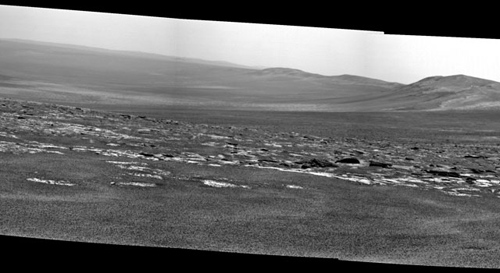 NASA's Mars Exploration Rover Opportunity used its panoramic camera (Pancam) to capture this view of a portion of Endeavour crater's rim after a drive during the rover's 2,676th Martian day, or sol, of working on Mars (Aug. 4, 2011). Image Credit: NASA/JPL-Caltech/Cornell/ASU

Opportunity and Spirit completed their three-month prime missions on Mars in April 2004. Both rovers continued for years of bonus, extended missions. Both have made important discoveries about wet environments on ancient Mars that may have been favorable for supporting microbial life. The mission of the Spirit rover, for which Spirit Point was named, was concluded in May, 2011, after the rover did not re-establish communications following the Martian winter.

NASA’s Jet Propulsion Laboratory, a division of the California Institute of Technology in Pasadena, manages the Mars Exploration Rover Project for the NASA Science Mission Directorate, Washington. More information about the rovers is online at: https://www.nasa.gov/rovers .