NASA’s Nuclear Spectroscopic Telescope Array (NuSTAR) and ESA’s (European Space Agency) XMM-Newton telescope are showing that fierce winds from a supermassive black hole blow outward in all directions — a phenomenon that had been suspected, but difficult to prove until now.

This discovery has given astronomers their first opportunity to measure the strength of these ultra-fast winds and prove they are powerful enough to inhibit the host galaxy’s ability to make new stars.

“We know black holes in the centers of galaxies can feed on matter, and this process can produce winds. This is thought to regulate the growth of the galaxies,” said Fiona Harrison of the California Institute of Technology (Caltech) in Pasadena, California. Harrison is the principal investigator of NuSTAR and a co-author on a new paper about these results appearing in the journal Science. “Knowing the speed, shape and size of the winds, we can now figure out how powerful they are.” 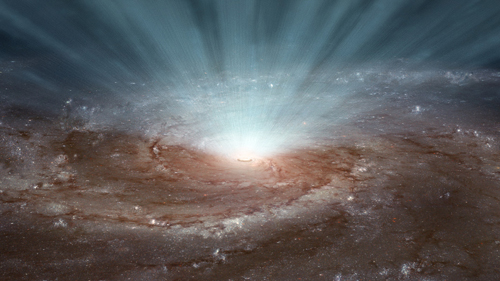 Supermassive black holes at the cores of galaxies blast radiation and ultra-fast winds outward, as illustrated in this artist’s conception. Image credit: NASA/JPL-Caltech

Supermassive black holes blast matter into their host galaxies, with X-ray-emitting winds traveling at up to one-third the speed of light. In the new study, astronomers determined PDS 456, an extremely bright black hole known as a quasar more than 2 billion light-years away, sustains winds that carry more energy every second than is emitted by more than a trillion suns.

“Now we know quasar winds significantly contribute to mass loss in a galaxy, driving out its supply of gas, which is fuel for star formation,” said the study’s lead author, Emanuele Nardini of Keele University in England. 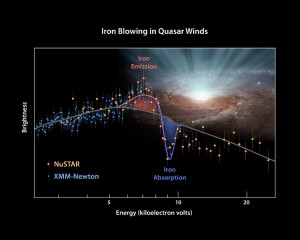 NuSTAR and XMM-Newton simultaneously observed PDS 456 on five separate occasions in 2013 and 2014. The space telescopes complement each other by observing different parts of the X-ray light spectrum: XMM-Newton views low-energy and NuSTAR views high-energy.

Previous XMM-Newton observations had identified black-hole winds blowing toward us, but could not determine whether the winds also blew in all directions. XMM-Newton had detected iron atoms, which are carried by the winds along with other matter, only directly in front of the black hole, where they block X-rays. The scientists combined higher-energy X-ray data from NuSTAR with observations from XMM-Newton. By doing this, they were able to find signatures of iron scattered from the sides, proving the winds emanate from the black hole not in a beam, but in a nearly spherical fashion.

“This is a great example of the synergy between XMM-Newton and NuSTAR,” said Norbert Schartel, XMM-Newton project scientist at ESA. “The complementarity of these two X-ray observatories is enabling us to unveil previously hidden details about the powerful side of the universe.”

With the shape and extent of the winds known, the researchers could then determine the strength of the winds and the degree to which they can inhibit the formation of new stars.

This latest report demonstrates a supermassive black hole and its high-speed winds greatly affect the host galaxy. As the black hole bulks up in size, its winds push vast amounts of matter outward through the galaxy, which ultimately stops new stars from forming.

Because PDS 456 is relatively close, by cosmic standards, it is bright and can be studied in detail. This black hole gives astronomers a unique look into a distant era of our universe, around 10 billion years ago, when supermassive black holes and their raging winds were more common and possibly shaped galaxies as we see them today.

“For an astronomer, studying PDS 456 is like a paleontologist being given a living dinosaur to study,” said study co-author Daniel Stern of NASA’s Jet Propulsion Laboratory in Pasadena. “We are able to investigate the physics of these important systems with a level of detail not possible for those found at more typical distances, during the ‘Age of Quasars.'”

NuSTAR is a Small Explorer mission led by Caltech and managed by JPL for NASA’s Science Mission Directorate in Washington.