Mysterious spectacular mounds found in the earth in tropical wetlands in South America are created by earthworms, researchers have found.

The densely packed, regularly spaced mounds cover large areas of the Orinoco Llanos in Columbia and Venezuela. Until now it was not known how they were formed.

A new study shows these mounds, called surales, are largely made up of earthworm casts, heaps of muddy soil ejected by their guts. This is the first research to describe their formation. 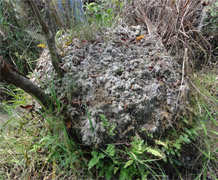 The mounds cover large areas of the Orinoco Llanos in Columbia and Venezuela. Image credit: University of Exeter

The experts set out to discover how surales were formed, and the role in their formation of the soil ecosystem. They also worked to find out why surales are found in different sizes and forms and the impact of this on plants and earthworms.

Researchers used remote sensing techniques, satellite images and aerial photographs taken by a drone to study the landscape. They also collected data on the physical and chemical makeup of soil to learn more about how surales form and develop. This information showed the experts that earthworm casts account for up to one half of total soil mass of surales, which vary in size from 0.5 to 5m in diameter and from 0.3 to more than 2m.

Surales are formed when large earthworms feed in shallowly flooded soils, depositing casts that form ‘towers’ above water level. Each earthworm returns repeatedly to the same spot to deposit casts and to respire. Over time, the tower becomes a mound.

When mounds already initiated are situated close together, the basin between them is filled and mounds join together.

Professor José Iriarte, from the University of Exeter’s Archaeology Department, who worked on the study, said: “This exciting discovery allows us to map and understand how these massive landscapes were formed. The fact we know they were created by earthworms across the seasonally flooded savannahs of South America will certainly change how we think about human versus naturally-built landscapes in the region.”

A video about the research can be found here.

The Surales, Self-organized Earth-mound Landscapes Made by Earthworms in a Seasonal Tropical Wetland, is published in PLOS One.