Mutation Stops Worms from Getting Drunk

AUSTIN, Texas — Neuroscientists at The University of Texas at Austin have generated mutant worms that do not get intoxicated by alcohol, a result that could lead to new drugs to treat the symptoms of people going through alcohol withdrawal.

The scientists accomplished this feat by inserting a modified human alcohol target into the worms, as reported this week in The Journal of Neuroscience.

“This is the first example of altering a human alcohol target to prevent intoxication in an animal,” says corresponding author Jon Pierce-Shimomura, assistant professor in the university’s College of Natural Sciences and Waggoner Center for Alcohol and Addiction Research.

An alcohol target is any neuronal molecule that binds alcohol, of which there are many.

One important aspect of this modified alcohol target, a neuronal channel called the BK channel, is that the mutation only affects its response to alcohol. The BK channel typically regulates many important functions including activity of neurons, blood vessels, the respiratory tract and bladder. The alcohol-insensitive mutation does not disrupt these functions at all.

“We got pretty lucky and found a way to make the channel insensitive to alcohol without affecting its normal function,” says Pierce-Shimomura. 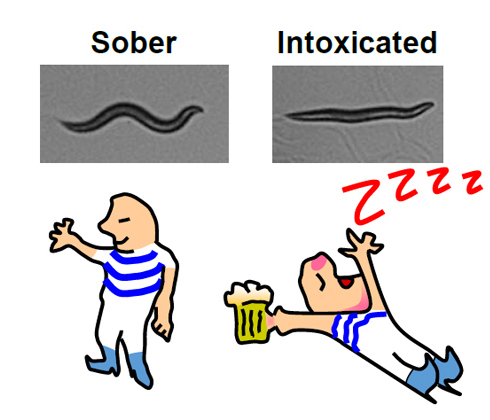 A visual comparison of a sober and an intoxicated worm. Image courtesy of Jon Pierce-Shimomura.

The scientists believe the research has potential applications for treating people addicted to alcohol.

“Our findings provide exciting evidence that future pharmaceuticals might aim at this portion of the alcohol target to prevent problems in alcohol abuse disorders,” says Pierce-Shimomura. “However, it remains to be seen which aspects of these disorders would benefit.”

Unlike drugs such as cocaine, which has a specific target in the nervous system, the effects of alcohol on the body are complex and have many targets across the brain. The various other aspects of alcohol addiction, such as tolerance, craving and the symptoms of withdrawal, may be influenced by different alcohol targets.

The worms used in the study, Caenorhabditis elegans, model intoxication well. Alcohol causes the worms to slow their crawling and exhibit less wriggling from side to side. The intoxicated worms also stop laying eggs, which build up in their bodies and can be easily counted.

Unfortunately, C. elegans are not as ideal for studying the other areas of alcohol addiction, but mice make an excellent model. The modified human BK channel used in the study, which is based on a mutation discovered by lead author and graduate student Scott Davis, could be inserted into mice. These modified mice would allow scientists to investigate whether this particular alcohol target also affects tolerance, craving and other symptoms relevant to humans.

Pierce-Shimomura speculated that their research could even be used to develop a “James Bond” drug someday that would enable a spy to drink his opponent under the table without getting drunk himself. Such a drug could potentially be used to treat alcoholics because it would counteract the intoxicating and potentially addicting effects of the alcohol.

Davis and Pierce-Shimomura’s co-authors at The University of Texas at Austin were research associate Luisa Scott and undergraduate student Kevin Hu.

This research was funded by the ABMRF/The Foundation for Alcohol Research, the National Institute on Alcohol Abuse and Alcoholism and the Waggoner Center for Alcohol and Addiction Research at The University of Texas at Austin.

You can access the original paper in The Journal of Neuroscience here.