COLUMBIA, Mo. ­— Using a special piece of MRI equipment, doctors from the University of Missouri College of Veterinary Medicine were able to remove a dangerous tumor from a beloved pet and therapy dog. Callie, an 8-year-old English Setter, began developing symptoms just a few days before being diagnosed with a tumor on her brain. Callie’s owner was referred to the neurological experts at MU, who performed a complicated procedure to remove the tumor from Callie’s brain.

Using high-tech surgical equipment called the Brainsight MR frameless neuro-navigation device, MU surgeons were able to take an MRI of Callie’s brain and create a 3D model. The 3-D model allowed the MRI to guide the doctors to exactly where their instruments needed to go to remove as much of Callie’s tumor as possible. Fred Wininger, an assistant professor of neurology and neurosurgery at the MU College of Veterinary Medicine, says only three or four other veterinary schools in the country have access to this kind of equipment. He believes the equipment was a crucial part of Callie’s successful surgery. 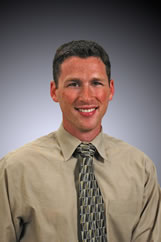 Fred Wininger is an assistant professor of neurology and neurosurgery at the MU College of Veterinary Medicine. Image credit: University of Missouri

“This surgery would likely have been less successful if we didn’t have this equipment,” Wininger said. “We would have been unable to identify the tumor in its entirety because it was covered in normal brain tissue. This equipment not only assists in open surgeries like Callie’s, but allows us to pinpoint any region of the brain with extreme accuracy, allowing us to perform biopsies through a hole the size of a pencil.”

“The Brainsight MRI allows us to place markers on the brain during surgery, so wherever we point on the dog shows on our screen as far as where the tumor is in the skull,” said Amy Komitor, a doctor in the College of Veterinary Medicine who assisted with the surgery. “This makes it easier to identify a tumor and the edges so that we can try and get as much of the tumor out as possible when we go in surgically.”

Dianne Fields, Callie’s owner, believes this equipment, and the expertise of the MU doctors, saved Callie’s life. As a therapy dog, Callie has helped reduce the stress of dozens of children and the elderly. Fields says it was time for Callie to get some help of her own.

“I don’t know where I’d be right now without the University of Missouri,” Fields said. “Callie wouldn’t be here and she means the world to me and I’ll go the extra mile— I’ll go as far as I have to go to see this through to the end. She’s a therapy dog and first of all she’s my best friend; she’s helped so many people in the community and now she needs help so it was time for me to stand by her.” 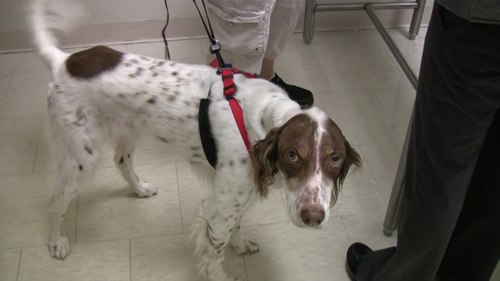 Callie, an English Setter, had a brain tumor removed by surgeons at the MU College of Veterinary Medicine. Image credit: University of Missouri

Callie is currently undergoing radiation therapy to prevent the tumor from returning. She is able to take long walks and the MU doctors believe she will live several more happy years. 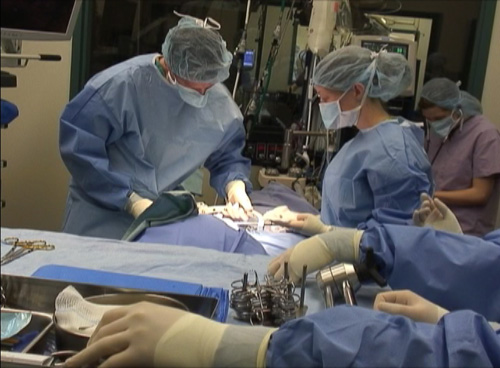 Surgeons from the MU College of Veterinary Medicine remove a tumor from Callie’s brain. Image credit: University of Missouri