COLUMBIA, Mo. – According to the National Weather Service, more than 125 people die from flash floods every year. Flash floods often arise from a weather phenomenon known as an “elevated convection,” which causes intense thunderstorms that lead to flash flooding. However, scientists do not have a strong understanding of what causes these elevated storms. A team of researchers at the University of Missouri will deploy to eastern Kansas and western Missouri to study this phenomenon throughout the spring.

“We hope to create a model of how this condition generates large storms, which often lead to flash flooding, the top-related weather killer,” said Patrick Market, a professor of atmospheric sciences in the College of Agriculture, Food and Natural Resources at MU and one of the leaders of the research team. “This will be the first time that measurements will be taken specifically of temperature changes and instability patterns before, during and after elevated convection events. We will share our findings with forecasters to help improve weather predictions.”

Elevated convection forms when air is lifted by either a cold or warm front, causing thunderstorm-producing instability in the atmosphere. Predicting elevated convection thunderstorms is difficult because these rarer storms often occur in cold air more than 100 miles on the cold side of a front, other factors including the intensity of the convection and how much moisture and energy is available. 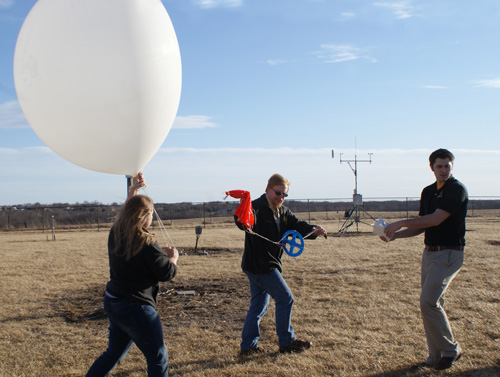 The research team, which consists of MU faculty and student researchers, will position research vehicles where elevated convection events are likely to occur and launch weather balloons in those areas. These balloons will travel through the event, radioing back temperature, atmospheric instability and moisture data at various altitudes throughout the duration of the event.

“Weather radar doesn’t show the temperature and moisture variations within lifting air that are critical to predicting these events,” Market said. “The data needed for a better forecast could be as simple as determining the warming or moistening of the lower troposphere, perhaps by a low-level jet stream. It could be that cooling or drying of the middle to upper troposphere causes the destabilization of the atmosphere. We do not know which of these factors is dominant, but we hope the data we collect can show where improvements need to be made in current radar systems.”

Market also said that the most elevated convection thunderstorms occur in the Midwest between May and September. The research, which is funded by the National Science Foundation, is co-led by Neil Fox, a professor of atmospheric sciences at MU.