Mother of All Mergers

*Yeast open a window on a spectacular step in evolution*

Around 800 million years ago, some of the one-celled organisms that constituted the whole of earthly life took an evolutionary leap that changed everything.

They started to band together, eventually evolving into complex organisms like animals and plants.

How that leap happened is a mystery that has eluded scientists. But now University of Minnesota researchers have coaxed normally solitary baker’s yeast cells into reenacting the leap, giving science a way to study not only this watershed event but its implications. 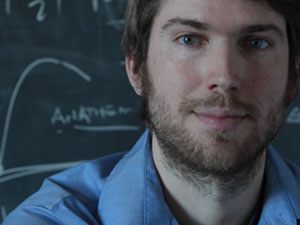 Will Ratcliff studies the transition of life from the original unicellular organisms to multicellular ones. Image credit: University of Minnesota

For example, the researchers say it’s possible that vestiges of the transition to a multicellular lifestyle show up in the way cells age and even how some turn cancerous.

“Because yeast are easy to grow and manipulate, we can investigate a host of important biological and medical topics that are far more difficult in complex multicellular life,” says Michael Travisano, an associate professor in the U’s Department of Ecology, Evolution and Behavior (EEB) and senior author of a paper on the work published online in the Proceedings of the National Academy of Sciences.

It had been assumed that such a dramatic shift must have taken millions of years. But the U of M researchers evolved new multicellular strains of yeast in just two months. 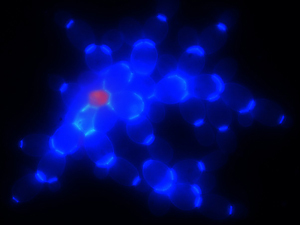 Turning multicellular involves risks, however. For example, a solitary cell that banded together with peer cells would lose autonomy. In particular, cells in the center of a cluster would have less access to resources and fewer opportunities to send out offspring into the world.

To coax the yeast into forming multicellular clusters, the researchers applied evolutionary pressure in the form of conditions designed to improve the survival of cluster-forming yeast once they evolved. They centrifuged yeast cultures and saved only the bottom fluid, where any cell clusters would be the first to settle. Next, they transferred the fluid to a nutrient solution and grew the yeast for a day.

After 60 rounds of this procedure, their yeast had evolved to form 3-D clusters with branched “snowflake” profiles, where every cell in a single cluster was genetically identical. The snowflake yeast reproduce by splitting off multicellular juveniles that need a period of growth before maturing and producing their own offspring.

The key step in the transition to a true multicellular life form is when natural selection and the rule of survival of the fittest begin to apply to clusters, says Ratcliff. At that point, clusters should start evolving as a unit. The team observed this with the snowflake yeast when they applied heavy evolutionary pressure for larger size and the clusters adapted. Specifically, they evolved to delay reproduction until they were bigger. (Reproduction, as shown in the accompanying time-lapse video, reduces a cluster’s size.) 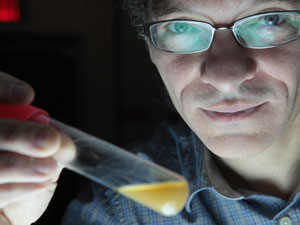 Michael Travisano is senior author of the study of how multicellularity arose. Image credit: University of Minnesota

Another result of the transition was the discovery that some cells in the clusters had evolved to commit suicide. These dead cells act as break points within the snowflake yeast, allowing them to regulate the number and size of offspring they produce.

“An important hallmark of multicellularity is that you have many cells that give up selfish reproductive interests to benefit the whole organism,” notes Ratcliff. “The fact that we see this evolving in our yeast after only 60 days is stunning.”

The research team found that the sizes and suicide rates of clusters were genetic traits, due to naturally occurring gene mutations during the rounds of centrifugation and growth. Also, the clusters did not readily revert to their ancestors’ solitary existence. Therefore, the team concluded, it appears that true evolution of multicellularity had occurred.

The researchers are continuing their yeast studies to discover how the transition to multicellularity affects the subsequent evolution of aging and, potentially, cancer.

And the transition isn’t necessarily just a thing of the past.

“This could be going on today anywhere there’s strong selection for larger size in microbes,” Ratcliff says.