Cases of melanoma, the deadliest form of skin cancer, are rising dramatically, despite the known link to outdoor or indoor exposure to ultraviolet rays. In fact, it is expected that more new cases of skin cancer will be diagnosed this year than breast, prostate, lung and colon cancer combined.

“Skin cancer is the most preventable cancer, but because many people still don’t understand the dangers of the sun and indoor tanning machines, melanoma has become one of the most common cancers among young adults,” says Dr. David J. Leffell, CEO of Yale Medical Group, a member of Yale Cancer Center and chief of dermatologic surgery and cutaneous oncology at Yale School of Medicine.

In addition to rising rates of melanoma, more than one million Americans a year are affected by other forms of skin cancer such as basal cell and squamous cell cancer, he says. 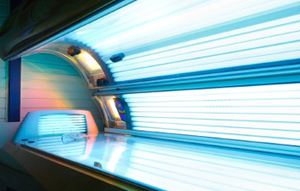 Lauren Hurd is a Yale administrative professional who was successfully treated at Yale for melanoma caused, she says, by overexposure to the sun and frequent use of tanning salons. Earlier this year, Hurd testified before the Connecticut state legislature in support of a bill to prevent anyone under age 18 from going to a tanning salon without the permission of a parent or guardian. The law would impose a fine of up to $100 on a facility operator who violates the underage provision. The bill is still under review.

Hurd says, “I started tanning just before prom, my senior year of high school. During my freshman year at college, a brand new tanning facility opened up directly across the street from campus, and they marketed heavily to students. My friends and I checked it out, and before we knew it, it became a part of our routine. I would say we went probably about three times a week.”

Hurd’s dangerous UV exposure continued each summer. “From ages 16 to 20, my summer job was lifeguarding, so I was outside almost every day. I did use sunscreen, but probably not at the dosage or frequency I should have,” she says.

Hurd was diagnosed with malignant melanoma at age 22. Luckily, the cancer was caught early, and was surgically removed. She must still get annual blood tests and chest X-rays, along with skin and lymph node exams every six months. In the years since her diagnosis, she’s also had minor surgeries to remove questionable spots on her skin.

“Lauren was fortunate to get an early diagnosis. She will now need to be vigilant her entire life. I would urge everyone to pay attention to her story, because it could save your life,” says Leffell, who has a website devoted to helping people learn about skin cancer and prevention (www.totalskinandhealth.com) and is the author  of “Total Skin: The Definitive Guide to Whole Skin Care for Life.”

About melanoma research and treatment at Yale

Yale Cancer Center is home to one of five National Institutes of Health-funded Specialized Programs of Research Excellence (SPORE) Grants in Skin Cancer in the country.

Led by Ruth Halaban, members of the SPORE research program are working to discover new biomarkers for prognosis and response to treatment of melanoma and other skin cancers, and potential novel targets for drug treatment.

Click here for a story including tips on how to prevent skin cancer, and information on the latest research into this disease.