More Seniors Being Held for Observation

A new study finds that more elderly patients in the emergency departments of hospitals are being held for observation rather than admitted as inpatients. Pressure from Medicare to reduce unnecessary hospitalization may be driving the trend. But being classified as an outpatient, rather than being admitted, can increase out-of-pocket costs for patients. The study is reported in the June edition of Health Affairs.

PROVIDENCE, R.I. [Brown University] — Nobody wins when patients stay in the hospital unnecessarily, so the federal government in recent years has pushed hospitals to be careful about admitting Medicare recipients as inpatients. The apparent result is that more patients are being “held for observation” instead, according to a new study by Brown University gerontologists. While the shift in how hospitals care for elderly patients in the emergency department may reduce costs to Medicare, it can also increase out-of-pocket expenditures for patients. 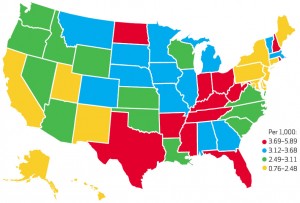 Held for observation. Monthly incidence of “observation stays” per 1,000 Medicare beneficiaries varies across states – lower in the West, higher in the South and Midwest. Image credit: Feng Lab/Brown University

In the study, the researchers found that although the rate of observation stays varies widely by state and even by hospital, the nationwide ratio of Medicare patients who are “held for observation” to those who are admitted for inpatient stays increased 34 percent between 2007 and 2009.

Being held for observation, especially for days, can appear to patients to be exactly the same experience as being admitted — until they get the bill. That’s because people held for observation are classified as outpatients. Under Medicare rules, outpatients may face higher co-pays for their in-hospital services and won’t be covered for subsequent care in skilled nursing facilities. Zhanlian Feng, assistant professor of health services, policy, and practice and first author on the paper, said he first thought to conduct the study when he read media reports of patients who were surprised by their higher costs after spending nights in the hospital.

“They never thought they were being treated as outpatients,” Feng said.

The practice has alarmed patient advocacy groups, one of which launched a class-action suit against the government last year. The groups had claimed the practice was increasing. Feng, a gerontology researcher in Brown’s Program in Public Health, figured he could contribute to the debate by determining whether that was true.

“I had not seen the numbers,” he said. “That really prompted me to do some real research.”

The results show that to a specific and significant degree, the increase is not just a perception. After reviewing Medicare records of 29 million fee-for-service Medicare beneficiaries 65 and older in 2007, 2008, and 2009, Feng and his two co-authors found several trends:

In its efforts to contain Medicare costs by preventing unnecessary hospitalization, the government has pulled several new levers in the last decade. In 2006 officials signaled an increase in audits of inpatient admissions, and in 2004 they allowed hospitals to change a patient’s status retroactively from inpatient to outpatient with observation before discharge. Most recently, the Affordable Care Act of 2010 includes a provision penalizing hospitals if they have high readmission rates. Classifying patients as outpatients, either on their first or second visit, helps hospitals steer clear of counting them as readmitted. 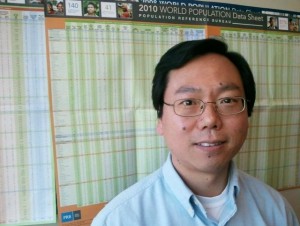 Zhanlian Feng. Most patients see no difference between being admitted (inpatient) and being held overnight for observation (outpatient). There are significant differences in hospital costs, Medicare rules, and out-of-pocket charges for patients, however. Image credit: David Orenstein/Brown University

Feng said he hopes the research will help policymakers better understand the facts surrounding the controversial issue. One area for further investigation, he said, could be to determine the clinical circumstances that led tens of thousands of patients to be held for observation for longer than three days. Another could be to determine how many patients held for observation actually faced any financial consequences for holding the outpatient versus inpatient designation.

In addition to Feng, the paper’s other authors were Vincent Mor, professor of health services, policy, and practice, and postdoctoral research fellow Brad Wright.

Funding for the research came from the Retirement Research Foundation (Grant 2011-066) and the National Institute on Aging (Grant P01AG027296).