William H. Woodall, a distinguished professor and statistician at Virginia Tech, spoke to a large audience on “Monitoring and Improving Surgical Quality” at the fourth annual W.L. Gore Lecture Series in Management Science last week on the University of Delaware’s Laird Campus.

The series, hosted by the Alfred Lerner College of Business and Economics and sponsored by an endowment from the Gore family, annually recognizes the role that probability, statistics and experimental design have played in the success of W.L. Gore and Associates Inc.

“I’m not a surgeon, but I’ve studied the quality of surgical monitoring for many years,” said Woodall, who has published extensively on aspects of process monitoring throughout his career. “Key aspects of statistical process monitoring of data collected over time include shifts in parameters that must be detected very quickly.”

“Examples of health care variables include lab turnaround, days from positive X-ray results to biopsy, patient satisfaction scores, and medical and surgical side effects,” continued Woodall. “We only want to react to changes if we have sufficient evidence that the results are significant. Many times there are erroneous blood samples due to labeling problems or inaccuracies.” 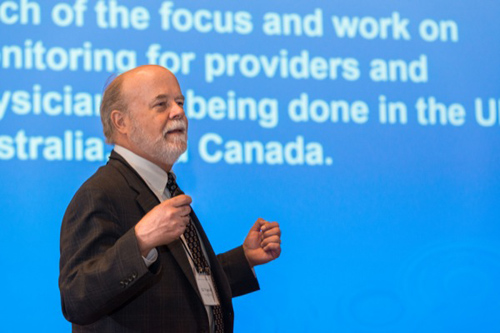 Much of the focus and work on monitoring of surgical quality for providers and physicians is done in the United Kingdom, Australia and Canada. There is not much monitoring in U.S. hospitals.

“He made house calls, which was unusual, and he injected those women with a deadly dose,” said Woodall. “They were fairly healthy women — these were not mercy killings. If physician monitoring was done at that time, red flags would have occurred before all of those deaths.”

Woodall also gave an example of a health care facility that faces quality problems with surgical monitoring. “Another unfortunate statistic is the Tuen Mun Hospital in Hong Kong, which has the worst hospital record for elective surgery and is second worst for emergency surgery in the world,” he said.

Throughout the lecture, Woodall illustrated methods for assessing risk adjustment. In health care comparisons, he explained that a logistic can help predict an adverse event. He built a statistical model based on whether or not a person lives or dies within 30 days of surgery.

“The models for emergency and elective surgeries differ because physicians can take their time to better screen patients for elective surgery,” said Woodall. “Personal risk factors are considered; each patient gets a score based on their health risks, such as, high blood pressure or diabetes.”

“Going up on the graph is a good thing,” said Woodall.

The cumulative sum control chart (Cusum) formula is the most common method for tracking surgical success. It’s a sequential analysis technique used for monitoring change detection, and it is used for predicting death within 30 days of surgery.

Important to note is that the risk adjustment method will move up or down when a patient survives or dies, but the degree to which the method moves depends upon the initial overall health of every patient.

“Ideally, in five hospitals each model should indicate the same results of similar surgeries, but it does not, because the underlying health of each patient is totally different,” said Woodall. “I cannot stress this conclusion enough.”

Woodall went on to describe the National Surgical Quality Improvement Program (NSQIP). Over 500 hospitals participate, including Delaware’s Christiana Hospital and the Nemours/A.I. duPont Hospital for Children.

Participant hospitals collect and submit data for risk-adjusted comparisons of surgical procedures. Data collected include: demographics, surgical profile, risk factors, intra-operative and post-operative data. About 140 variables per patient are considered. The bottom line is that the observed/expected (OE) ratio is good if it’s less than 1 and bad if it’s greater than 1.

“Mortality rates indicate that many patients were too sick initially to even have the surgery,” said Woodall. “About 15 percent tested positively for MRSA and are being treated.”

Woodall said that with regard to his statistical models, “Risk assessment is a fundamental part of health care monitoring. NSQIP is a model program that can assess and promote health care improvement. It is the system that needs to be improved — not the surgeon. Health care quality improvement is an exciting area that directly benefits all of us.”

“More and more hospitals are hiring statisticians and engineers to improve their quality assessment of surgical results,” said Woodall. “That’s a good thing.”