Researchers have combined two separate computer models to identify areas at highest risk for outbreaks of lumpy skin disease virus (LSDV) in cattle. The models could help officials determine where to send resources ahead of outbreaks and serve as a potential early warning system for cattle farmers in affected areas.

LSDV is a disease that affects cattle. Current research points to transmission via biting insects such as flies, fleas, ticks or mosquitoes. Infected calves may die, and older cattle develop bleeding circular lesions on the skin, decreased milk production, and overall poor health. 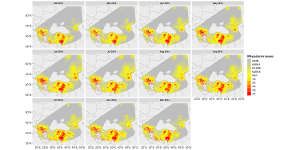 Although LSDV is endemic to Africa, since 2015 the disease has spread into the Northern Hemisphere including Azerbaijan, Kazakhstan, the Russian Federation and the Balkans. The rapid expansion of LSDV in those regions shows the virus can thrive in more temperate regions than those in which LSDV traditionally occurred.

“LSDV represents an emerging threat to international trade of livestock products and live animals, due to the economic impact of milk and beef production losses,” says Gustavo Machado, assistant professor of population health and pathobiology at NC State and corresponding author of a paper describing the work. “The good news is that the disease can be controlled by vaccination. However, we need a way to efficiently target our prevention efforts.”

Machado and an international team of colleagues combined two different computer models – a risk model that examined the spatiotemporal dynamics within affected areas and a suitability model that looked at ecological conditions in affected areas – to determine where the virus would be most likely to thrive. Focusing on data from 2014 to 2016, before vaccination protocols began, the team divided study areas into 20 by 20 kilometer portions and fed information on cattle numbers and ecological conditions into the integrated model.

The model identified elevated risk areas in Russia, Turkey, Serbia and Bulgaria. Risk was positively associated with precipitation and temperature, and negatively affected by wind. Results suggest that if current ecological and epidemiological conditions persist, further spread of LSDV in Eurasia may be expected.

“Although there is little risk of airborne transmission of LSDV, if ecological conditions are favorable for the insects that can transmit it, the disease can spread – even in areas where there isn’t a particularly large cattle population,” Machado says.

Although LSDV hasn’t yet been reported in the U.S., Machado says his model could easily be used to predict high-risk areas if an outbreak occurs. “We don’t want LSDV to have the devastating impact on the cattle industry that African swine fever is having on the pork industry,” he says. “Models like this one are necessary to help farmers and agricultural agencies stay ahead of the disease curve.”

The research appears in Transboundary and Emerging Diseases, and was supported by NC State’s College of Veterinary Medicine, the University of Minnesota Academic Health Center, and the Spanish Ministry of Economy, Industry and Competitiveness. Fedor Korennoy, from the Federal Center for Animal Health in Vladimir, Russia, is co-author. Catalina Picasso-Risso, Andres Perez and Kimberly VanderWaal from the University of Minnesota St. Paul and Julio Alvarez from the Universidad Complutense in Madrid, Spain, also contributed to the work.