If you’re a gardener, milkweed may not be at the top of your list.

But if you love Minnesota’s state insect—the monarch butterfly—maybe it should be.

Monarchs lay their eggs on milkweed, but the plant is disappearing from what used to be a prime reservoir: Midwestern farm fields. A new study by University of Minnesota monarch expert Karen Oberhauser and her Iowa State colleague John Pleasants ties a decade-long decline in monarch populations to the loss of milkweed from the corn and soybean fields that blanket the region.

The losses of monarchs parallel the rise in the use of glyphosate herbicides, which kill milkweed and other crop weeds while leaving crops engineered to tolerate the herbicides intact, the researchers discovered. Since this situation is unlikely to change, they encourage land managers and individuals to plant and conserve milkweed.

“Now that we have a better handle on the causes for the decline in monarch numbers, the areas outside agricultural fields are more important than they used to be,” says Oberhauser, an associate professor in the University’s Department of Fisheries, Wildlife and Conservation Biology. “It underlines the importance of putting milkweed in garden plantings, prairies, and roadsides.”

The work is published online in the journal Insect Conservation and Diversity.

From Mexico to Minnesota

When monarchs leave their Midwestern summer habitat, they head to specific overwintering grounds in Mexico, where they congregate by the millions. Individual butterflies can’t be counted, but because they huddle close together, changes in the area they cover reflect changes in population numbers. 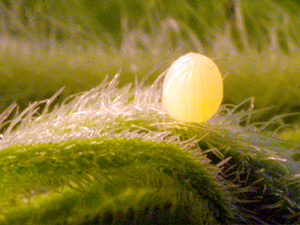 “Previous reports indicated that the size of the population in Mexico has been declining over the past 15 years,” says Oberhauser. “But no one had come up with a ‘smoking gun’ for the cause of that decline.”

In the current study, the researchers estimate that the number of milkweed plants on the Midwestern landscape has also declined—by 58 percent between 1999 and 2010, almost entirely from losses in cultivated fields due to herbicides. But by itself, that consistent decline couldn’t explain the sizes of the winter populations in Mexico, which varied a lot from year to year even though they, too, showed an overall downward trend .

Milkweeds also grow in other locations, however. An army of volunteers in the U of M-based Monarch Larva Monitoring Project has been collecting data on the numbers of monarch eggs per milkweed plant in more than 800 milkweed patches around the country. Those patches are unaffected by herbicide use but do reflect background fluctuations caused by the vagaries of weather.

“The size of the area occupied in the Mexican sites is explained best by a combination of the decline in milkweeds from agricultural fields and the number of eggs per plant elsewhere,” says Oberhauser. “Year to year variation in egg densities is probably driven by weather patterns. While it’s very likely that factors other than the loss of milkweed in agricultural fields, such as loss of overwintering or migratory habitat, have also played a role in the declining monarch populations, this is the first cause-and-effect relationship we’ve been able to document.”

Also, since monarchs lay more eggs on milkweeds if they’re in cultivated fields, egg production was disproportionately affected by the loss of agricultural milkweed plants. The researchers estimate that between 1999 and 2010, monarch egg production in the Midwest dropped by 81 percent.

These losses could be mitigated if enough milkweed were grown outside agricultural areas.

“We’re working with land managers on large and small scales through the Monarch Joint Venture,” says Oberhauser. “This is a collaborative effort of NGOs, University people, federal agencies and some state agencies that is housed at the U of M. This Joint Venture is promoting both restoration and conservation of monarch habitat.”

But milkweed is good for more than just hosting monarch eggs and larvae.

“Milkweed is a great source of nectar for pollinators,” Oberhauser says. “And you can buy seeds or even small plants at nurseries and garden centers.”