Fans flocked to the opening of a new Microsoft retail store in Corte Madera, Calif., to get their hands on the new Surface and Windows 8 PCs. The opening, one of many at Microsoft in recent weeks, is part of the company’s ongoing expansion of its brick-and-mortar retail stores program.

CORTE MADERA, Calif.— Nov. 8, 2012 — A group of beaming, cyan-clad Microsoft retail store employees gathered near the front windows, which were covered by an opaque curtain.

After months of work, it was almost time.

Directly behind them, tables of Surface units, Windows 8 PCs, phones, and countless games and accessories sat ready for customers. Directly in front of them, through the curtain covering the store, were the outlines of Microsoft and local leaders and nearly 1,000 people waiting for the store to open.

Inside the store, the employees finish a team cheer with the energy and enthusiasm of a high school football team headed out onto the field under Friday night lights. 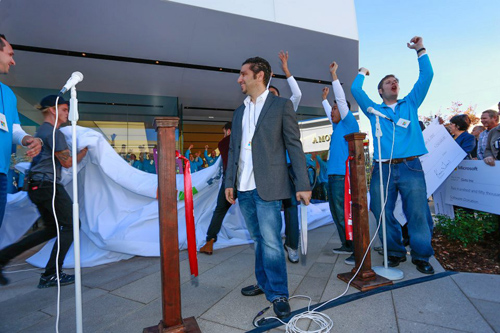 It was Saturday, Nov. 3, and the crowd outside and employees inside were counting down from eight (in honor of Windows 8), the curtain dropped, the dance music started up, and for the next two hours those 1,000 people would file into the store to shop and get wristbands to a special performance by Kelly Clarkson that evening to celebrate the grand opening. Many at the front of the line sported bedhead, and carried pillows and sleeping bags – they’d arrived more than 12 hours earlier for the chance to be first into the store.

Microsoft retail stores – both brick-and-mortar locations and seasonal holiday stores – have become a vital way for the company to develop closer relationships with consumers, and conversely, to put consumers directly in touch with Microsoft technology, said Jonathan Adashek, general manager of Communications Strategy.

“This is the one place where you can see all of Microsoft’s offerings in one place, and that’s something that’s really important for us,” Adashek said. “Customers tell us they appreciate having direct access to Microsoft technology and face-to-face tech support. It’s a huge value for them.”

The company opened its first store in Scottsdale, Ariz., in 2009. Microsoft now has 30 stores in the U.S. including one that opened earlier this month in Puerto Rico, and another opening today in Cincinnati, Ohio. The company’s first international Microsoft retail store will open in Toronto in Canada on Friday, Nov. 16.

“We’ve welcomed more than 15 million customers and counting so far, and have learned a lot from them,” Adashek said. “Having this direct connection to our customers has really helped us better understand their tech needs.” 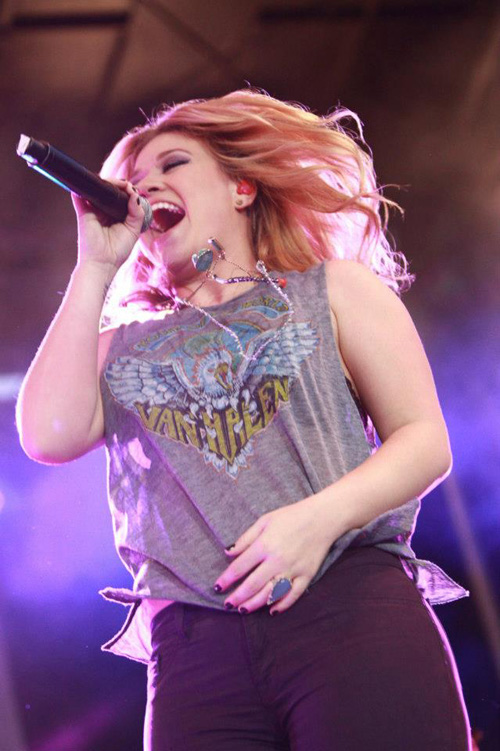 Microsoft offers a “white glove” out-of-the-box experience for Surface and Windows 8 customers; associates will help them customize their PC, learn tips and tricks, try new features such as the picture password, and introduce them to services like SkyDrive, Adashek said.

“The stores are a resource for the community and its technology needs,” he said. “We feel like we are on the right path and are highly motivated to expand our footprint and give more customers a chance to have the store experience.”

More Stores for the Holidays

In addition to brick-and-mortar stores, Microsoft opened holiday stores on October 26 in more than 34 cities, including New York City, Dallas, Chicago, Denver, Portland, Miami and Tulsa in the U.S. and Vancouver, British Columbia, and West Edmonton, Alberta, in Canada. People can go to Microsoftstore.com to find the story closest to them.

The holiday stores have a smaller footprint than the brick-and-motor stores but they have a lot of the look, feel and colors of traditional stores – even the tabletops and wood floors, said Travis Walter, general manager of Microsoft’s International and New Store Formats.

The goal is to introduce the Microsoft retail store experience to locations that don’t yet have a store, and to give people a chance to shop for Microsoft products in person.

“We really want to have a direct relationship with customers. I think when you see people touch the Surface tablet or experience Windows 8 in person, a light goes off in their head,” Walter said. “In person, you get a very different experience and it’s one we’ve been very delighted to provide. When you see our technology in person – when you can touch and feel it – a light goes off.” 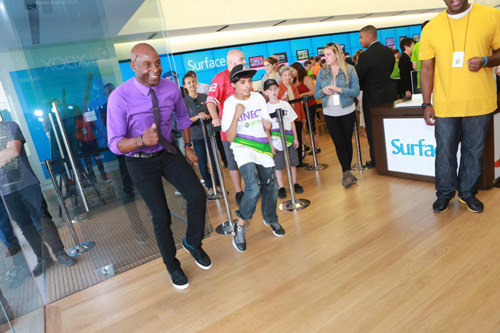 Microsoft retail stores also have the opportunity to introduce customers to the company’s entire ecosystem, from Windows 8 PCs to Windows Phone 8 to Surface to Xbox with Kinect, and well-trained associates can show people how everything works together and how it can work for them, he said.

Microsoft’s Holiday Stores will run through the holidays, Walter said.

“Not every retail experience is created equal, and who better to talk about the products than the company that makes them,” Walter said. “We’re going to reinvent the kiosk experience.” 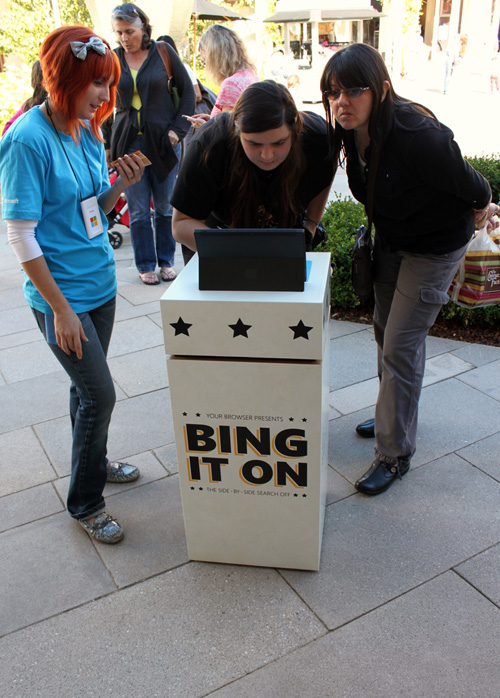 Anne-Laure Bredehoft and her children Roman, 14, and Iris, 12, huddled around a Surface tablet, oblivious to the hustle and bustle of the crowded, newly opened Microsoft at The Village Corte Madera.

The family recently moved to California from France.

“I’m not a geek, really, but this is really fun,” Bredehoft said.

She liked Surface’s Touch Cover, and that it comes in a variety of colors. She also likes the touch interface, and swiping through the colorful Windows 8. Her son Roman, who is still learning English, said something to his mother in French.

“He said he likes it better than the iPad,” she said. “It’s much easier,” Roman said in English, smiling shyly.

Pressed for specifics, Roman said he likes that Surface has a built-in kickstand for propping the tablet up, and that you can use Surface with or without the keyboard – though he really likes it with the Touch Cover, he said.

Giving customers hands-on time with products in a “world-class” retail experience is job one, said Microsoft retail Store Manager Ryan Scott, which is why associates train for months before going to work.

“We have people from so many different backgrounds – people who have never worked with technology in their life but they have hunger to do it, but they all share a great attitude and energy,” Scott said. “We feel that as long as they’re willing to learn about Microsoft specifically and technology in general you can definitely teach them that part.”

Holding a Surface with a cyan Touch Cover that perfectly matched his Microsoft Store T-shirt, Ryan said the advantage of Microsoft having its own stores was that the company could better control the experience – to make it “one of the most beautiful and captivating retail stores out there.”

“We have a big job to uphold the Microsoft brand and name. I take that very seriously,” Scott said. “From the second they walk in the store, whether they buy anything or not, I want them to have a world-class experience and walk out with that wow factor so when they think about Microsoft they think about incredible service, the best technology in the world, and they then want to share that with their friends and family.” 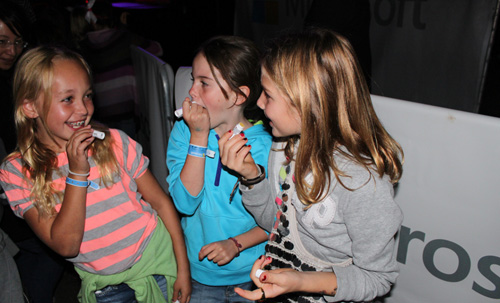 Each store opening features a special performance from popular musicians to help celebrate the grand opening, such as Kelly Clarkson, Maroon 5, Enrique Iglesias, and Black Keys – wristbands go to those who line up for the store opening, which inevitably leads to a hardy handful of technology and music lovers camping out the night before the curtain drops. There’s also community involvement – local officials are on hand to celebrate the arrival of new business. There is also community giving at each opening, with Microsoft giving software grants togroups in each community.

At the Corte Madera store opening, Microsoft gave a $250,000 technology grant to the the Children’s Creativity Museum and the non-profit organization Girls Inc. and a $1 million grant to Junior Achievement of Northern California.

It’s no coincidence, said Kelly Soligon – Microsoft is working hard to differentiate itself among retailers by putting out a “welcome mat” in giving the community the gift of a free concert and technology grants.

“We want it to be about the community. We value being connected to the community and we see these openings as a way to introduce the broader community to Microsoft – our company, our retail setting, and our great selection of products,” Soligon said.

Soligon said Microsoft has recieved great feedback from customers and community members for the way the company introduces itself to new cities. Consumers also appreciate the opportunity to spend time with Microsoft products in person, she said.

“People think they know what Microsoft does, but they haven’t seen us in a retail setting. We see people delighted and surprised by the depth and breadth of the products we offer – some people don’t know Xbox is made by Microsoft, so they start to make that connection,” she said. “You see people awakened to technology and what we do – the full Microsoft picture – and that we’re really genuine about the community connection.” 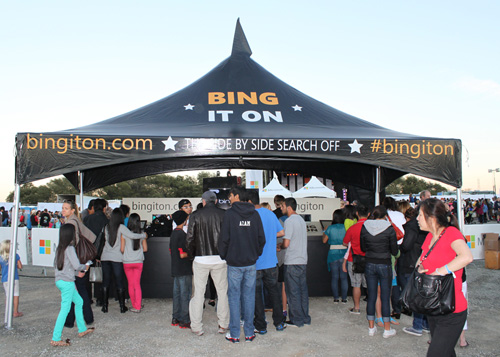 Store openings such as this one in Corte Madera, Calif., on November 3, 2012, have a festival-like atmosphere, including free concerts, giveaways, dancing and music, and product showcases from Microsoft and its partners. Image credit: Microsoft

After the hoopla of the first day, each store has a commmunity development specialist who is dedicated to working with local organizations to arrange in-store events and activities that help drive awareness of their causes with the community while offering the opportunity to learn new technology skills. Each store has a theater space that community organizations can use for free, whether it’s Girl Scout and Boy Scout troops earning their technology patches or small businesses holding seminars.

The overall goal is to make sure customers have an amazing shopping and buying experience.

“Technology decisions for consumers can be expensive. The ability to come in and touch the products, use the products, see the great selection, we want people to feel really good about their purchase decision. It’s not a decision to make lightly,” she said. “Obviously we would love people to buy Microsoft technology from a Microsoft retail store, but at the end of the day if they have a great experience in the Microsoft store and end up buying a PC from Costco, that’s awesome too.”

Singing as the Sun Sets

As the sun went down behind the mountains around Corte Madera, American Idol winner Kelly Clarkson had the crowd of 2,600 waving their hands and bouncing up and down.

“Thank you very much to Microsoft, I appreciate it,” Clarkson said to concert-goers. “It’s such a cool thing to do for fans.”

The outdoor performance had a festival-like atmosphere; opposite the stage was a pavilion of tents where Microsoft and company partners including Dell and Intel had hands-on exhibits and giveaways. The Bing It On tent was crowded with people taking the side-by-side search challenge. Soligon said the pavilion is a great showcase opportunity for products inside and outside of Microsoft.

Near the stage, Izzy Skov, 10, Abby O’Neil, 9, and Shelby Weingard, 9, applied their new Microsoft lip balm (a store opening giveaway) and basked in the bright pink and purple lights and the thumping music. It was their first concert.

“She has an amazing voice,” Weingard said.

The girls and their mothers waited in line for 45 minutes for our tickets, and looked around the store as well, which they deemed “pretty cool because of those laptop thingies.”

“It was so worth the wait,” said Skov. “This is kind of awesome.”