Through a shared commitment to STEM education, Microsoft and LEGO Education team up to create hands-on opportunities for the next generation to be inspired by and engage with technology in new ways.

SAN FRANCISCO — Ever wonder what it takes to inspire and prepare the next generation to fill the pipeline of science, technology, engineering and mathematics (STEM) jobs of the future? For Microsoft and LEGO, the answer is simple: Make STEM fun, accessible and engaging. At Microsoft’s recent developer conference, BUILD, Microsoft revealed the SentryBot — a small, yet powerful, robot featuring unique interactive scenarios only possible on the Windows platform. SentryBot demonstrates just how fun STEM can be regardless of your technical background.

A connected-device, robotic scenario built atop the LEGO Group’s new LEGO MINDSTORMS EV3 platform, SentryBot features two Microsoft Surface Pros that take advantage of new Windows 8.1 APIs to interact directly with the MINDSTORMS robot. Using the robot’s built-in sensors and the webcam on one Surface Pro, SentryBot actively responds to its environment as conditions change. In Sentry Mode, for example, SentryBot quickly comes to life in the presence of an intruder, its friendly grin turning serious as it maneuvers to keep the individual’s face in view. Should the intruder get too close, SentryBot can snap a mug shot and post it to Twitter for all to see. Meanwhile, SentryBot’s owner can monitor everything remotely using the other Surface Pro with the Windows 8.1 app.

Developed within Microsoft’s Developer and Platform Evangelism team, SentryBot represents the work Microsoft is doing with LEGO Education to engage the imagination of students, teachers and developers around the world. The timing is pertinent, too, as the United States and many countries redouble efforts to generate interest and passion for the STEM disciplines. Approximately 1.2 million job opportunities requiring 21st century skills are expected by 2018 — a challenge LEGO Education has taken on for the past 30 years.

“Traditional STEM courses can be intimidating when taught solely from a textbook. LEGO Education saw tremendous potential in the LEGO brick as a way to partner with educators to deliver hands-on curriculum and enable students to actively take ownership of the learning process,” says Abigail Fern, director of marketing, LEGO Education North America. “Kids need to learn how to solve problems, how to be flexible and how to adapt to change. For over 30 years now, we’ve partnered with educators to introduce an approach that encourages students to try new things and learn from failure, rather than fearing or avoiding it. The LEGO MINDSTORMS Education robotics platform accomplishes this in some really exciting ways for students and teachers.” 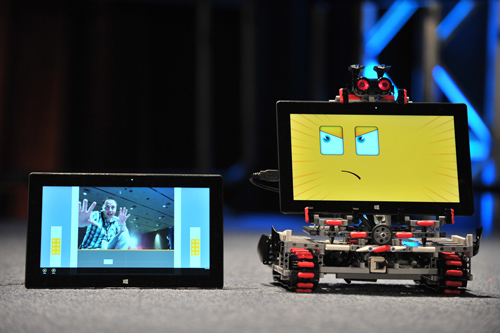 Born 15 years ago as the brainchild of The LEGO Group and MIT Media Lab, LEGO MINDSTORMS moves into its third generation this year with the EV3 robotics platform. Featuring a new, programmable Intelligent Brick, the brain and control center for every LEGO MINDSTORMS robot, the EV3 robotics platform lets teachers, students, developers and kids at home start working with it right away. The Intelligent Brick also features a dedicated CPU, USB port, SD slot, on-board Bluetooth and connectivity to a range of sensors, including the ultrasonic sensor used in the SentryBot to track the intruder’s distance.

LEGO MINDSTORMS EV3 offers an open platform for any program, from on-brick programming for simple tasks to more advanced tasks using the LEGO MINDSTORMS Education EV3 software, which is built on National Instruments LabVIEW. And, similar to the openness of the Windows 8 platform, additional languages such as Java can be developed to use with the EV3 robotics platform, offering flexibility that helps virtually anyone of any skill level use the EV3.

Its robust Windows support and options to connect via USB or Bluetooth made it a hit with the Microsoft team, who embraced the challenge of exploring the different ways they could interact with the EV3 robotics platform.

“LEGO has protocols that make it really easy to connect to and program its MINDSTORMS products,” says Eric Havir, senior manager, Developer and Platform Evangelism, Microsoft. “Getting the EV3 to work with Windows 8.1 over the USB or Bluetooth is easy. This means developers don’t have to worry about getting the devices to connect and can focus on turning their ideas into working concepts.” 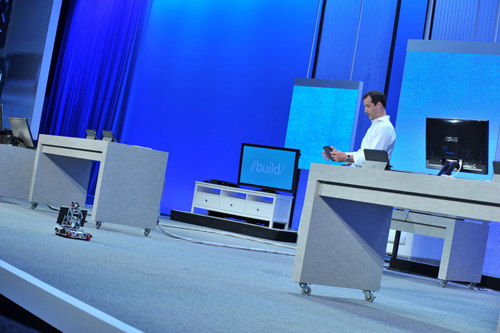 Inspiring the next generation of creative problem solvers. Microsoft and LEGO Education team up to bring STEM and app development to life in a fun and unique way with the SentryBot. Image credit: Microsoft

Using Windows 8.1 gives developers even greater control over the MINDSTORMS robotics platform. In fact, SentryBot marks the first time a Surface Pro has been directly installed on a MINDSTORMS EV3 robot and controlled wirelessly from a second Surface Pro with real-time, two-way video.

“The Windows 8 platform gives developers of all backgrounds an opportunity to create unique experiences and easily get their ideas into the market,” Havir says. “We wanted to develop an experience that inspires others to build something never seen before. As clever as our SentryBot demonstration is, I know the developer community will devise and build even more amazing scenarios with MINDSTORMS robots when LEGO MINDSTORMS EV3 ships in August.”

Despite operating in different markets for different audiences, Microsoft and the LEGO Group saw many reasons to come together when they officially entered a sweeping global alliance in 2001, including a mutual passion for inspiring the next generation of creative problem solvers.

“Microsoft built Windows 8 as a flexible platform that enables developers with various skillsets to build applications, and we see LEGO taking advantage of this with its SDK for the MINDSTORMS EV3 platform,” Havir says. “This open approach lets developers work on all kinds of things, whether it’s for personal projects, creating classroom tools, for their companies, or even as moms and dads looking to spend time with their kids.”

“The great thing about working with a flexible platform is that it expands the ways the platform can be used,” Fern says. “The teachers and schools we work with generally want more structure, which is something we provide through our activity packs and curriculum creation tools. At the same time, for those wanting to start from scratch, we provide direct access to the programmable components of the EV3, so the only limit really is their imaginations.”

Both LEGO Education and Microsoft are particularly keen on exploring the intersection of digital and physical experiences in the classroom, which is where robotics plays a critical role. For education, Fern described robotics as a means to an end in helping students master 21st century skills.

“Robotics helps kids learn how to build what’s in their brains,” she says. “It’s not about the robot — it’s about how the robot is used to teach and learn and to help educators prepare a new generation of problem solvers who aren’t afraid to tackle some of our world’s greatest challenges.”

Microsoft’s vision for the future of physical and digital experiences aligns deeply with LEGO Education’s commitment to STEM education.

“Today we are surrounded by touch interfaces, and while these have changed how we interact with devices, we want to push even further. What can our work with the EV3 teach us about how we use the Internet of Things, for example? That’s why I can’t wait to see what the developer community creates based on what we’ve started,” Havir says.

In the meantime, SentryBot cheerfully continues its vigil, waiting for the next thief to try his or her luck.

The LEGO Group is releasing the MINDSTORMS Education EV3 robotics platform to classrooms on Aug. 1, 2013, and a version from the toy division for play at home will be available this fall. The API for Microsoft’s SentryBot app will be made available to the developer community together with the official launch of Windows 8.1.