“It’s like she’s not really there.”
– Study participant who bought sex

Men who buy sex have less empathy for women in prostitution than men who don’t buy sex, according to a study published online Aug. 31 in the Journal of Interpersonal Violence. The research, co-authored by UCLA professor Neil Malamuth, also found that men who buy sex are more likely to report having committed rape and other aggressive sexual acts.

The study of 101 men in the Boston area who buy sex and 101 men who do not indicates that sex buyers’ perspectives are similar to those of sexually coercive men.

“Our findings indicate that men who buy sex share certain key characteristics with men who are at risk for committing sexual aggression,” said Malamuth, a professor of communications studies and psychology. “Both groups tend to have a preference for impersonal sex, a fear of rejection by women, a history of having committed sexually aggressive acts and a hostile masculine self-identification. Those who buy sex, on average, have less empathy for women in prostitution and view them as intrinsically different from other women.” 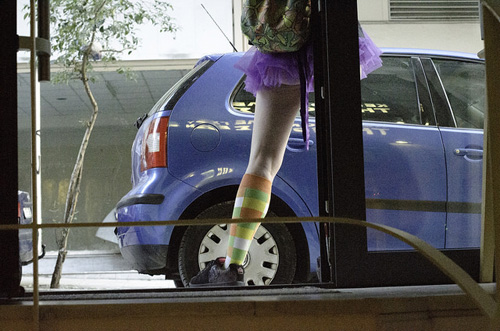 In other studies, a lower level of empathy among men has been associated with sexual aggression toward women.

“We hope this research will lead to a rejection of the myth that sex buyers are simply sexually frustrated nice guys,” said Melissa Farley, the study’s lead author and executive director of Prostitution Research and Education, a San Francisco-based nonprofit.

Had the study found no differences between the views of men who buy sex and those who don’t, it might have given credence to those who advocate legalizing and regulating prostitution, said Farley, an expert on prostitution and human trafficking.

“However, given the significant levels of sexually aggressive attitudes and behavior found in sex buyers, a more progressive legal policy would be like that seen in Sweden and Norway, where prostitution is understood as a predatory crime against economically and ethnically marginalized women,” she said. “The Nordic model arrests sex buyers but decriminalizes those in prostitution and provides them with exit services.”

One man who bought sex and was interviewed for the study compared the transaction to disposing of a coffee cup after he had finished drinking from it. “When you’re done, you throw it out,” he said.

Another said of women in prostitution, “I think a lot of times they feel degraded. I mean, the ones I know have no self-confidence, so they feel less than a person, and more like a commodity.”

Malamuth said the study confirmed the predictive ability of many of the risk factors for sexual aggression he has studied for the past 35 years. His Confluence Model characterizes men who are at higher risk for committing sexual aggression. It emphasizes several key risk factors, including antisocial behavior, a preference for impersonal sex, treating sex more as a sport than as part of an intimate relationship, and “hostile masculinity,” which includes traits such as a narcissistic personality, hostility toward women and a desire to have power over women.

The men in the study were relatively knowledgeable about coercion and sex trafficking, and about many of the reasons that women entered prostitution.

The researchers screened more than 1,200 men to reach two groups of men who were similar in age, ethnicity and socioeconomic status.  The men were guaranteed anonymity and each was interviewed for about two hours. The study was funded by Hunt Alternatives, a private foundation.