Mass die-offs of animals may be increasing in frequency and — for birds, fishes, and marine invertebrates — in severity as well, according to a study of 727 mass mortality events since 1940.

“The initial patterns are surprising, in terms of the documented changes to frequencies of occurrences, magnitudes of each event, and the causes of mass mortality,” said Samuel Fey, a postdoctoral fellow in the Department of Ecology and Evolutionary Biology at Yale and co-lead author of the paper. “These data also show that we have a lot of room to improve how we document and study these types of rare events.” 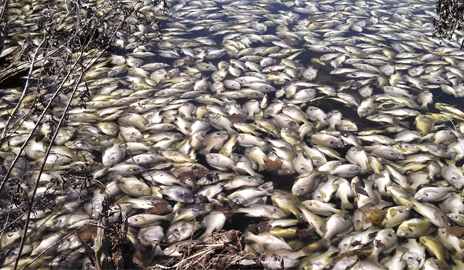 Fey, along with fellow researchers at the University of San Diego and University of California-Berkeley, report that the magnitude of the die-offs has increased in birds, fishes, and marine invertebrates, held steady among mammals, and decreased in frogs and amphibians. The authors recognized that more scientific research has been done on mass mortality events in the last few decades but said even accounting for this “discovery bias” does not explain all of the increase in such events. The increase in mass mortality events appears to be associated with a rise in disease emergence, biotoxicity, and multiple interacting stressors, they note.

Overall, disease was the primary culprit, accounting for 26% of the mass die-offs. The impacts of direct human activity, primarily from environmental contamination, caused 19% of such events. Another major cause was biotoxicity triggered by events such as algae blooms, rapid increases of algae in water systems. Processes directly influenced by climate — such as weather extremes, thermal stress, oxygen stress, or starvation — also contributed accounted collectively for about 25% of mass mortality events.

The most severe events were those with multiple causes, the paper shows.

“This study should improve our understanding of the continuum of mortality patterns and processes that exist between background mortality levels and species-level extinctions,” Fey said.