Mars developed in as little as two to four million years after the birth of the solar system, far more quickly than Earth, according to results of a new study published in this week’s issue of the journal Nature.

Their research was funded by the National Science Foundation (NSF).

Mars probably is not a terrestrial planet like Earth, which grew to its full size over 50 to 100 million years via collisions with other small bodies in the solar system, said Dauphas, a geophysicist.

“Earth was made of embryos like Mars, but Mars is a stranded planetary embryo that never collided with other embryos to form an Earthlike planet,” Dauphas said. 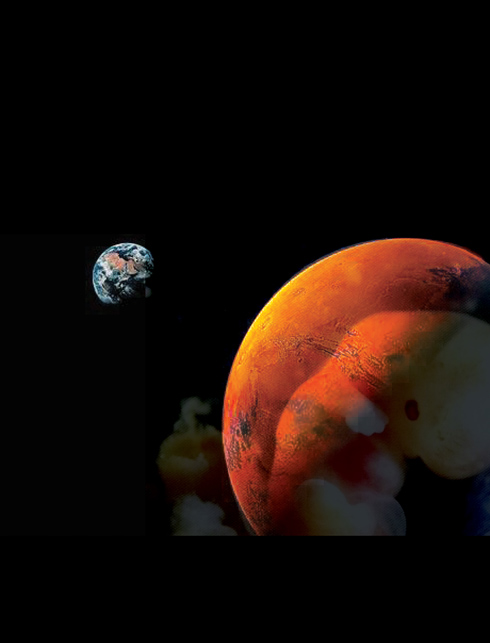 Mars is a a planetary embryo that never collided with other embryos to form an Earthlike planet. Image credit: Christopher Leather, University of Chicago

The new work provides evidence for this idea, which was first proposed 20 years ago on the basis of planetary growth simulations.

It likely will change the way planetary scientists view Mars, said Pourmand, a marine geologist and geophysicist. “We thought that there were no embryos in the solar system to study, but when we study Mars, we are studying embryos that eventually made planets like Earth.”

There had been large uncertainties in the formation history of Mars because of the unknown composition of its mantle, the rock layer that underlies the crust.

“Now we can shrink those uncertainties to the point where we can do interesting science,” Dauphas said.

Dauphas and Pourmand were able to refine the age of Mars by using the radioactive decay of hafnium to tungsten in meteorites. 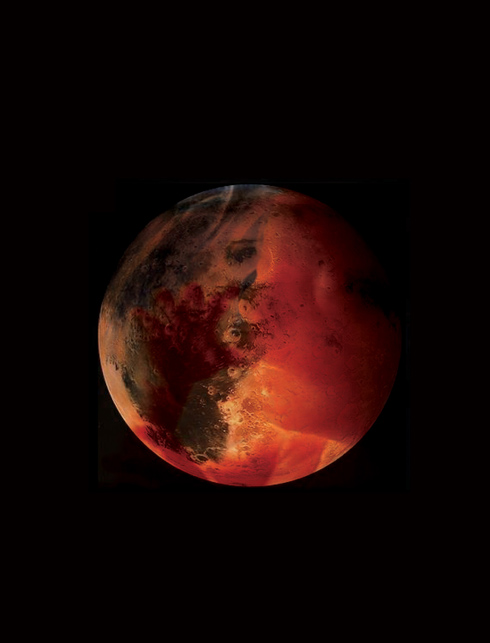 Hafnium 182 decays into tungsten 182 in a half-life of nine million years. This relatively rapid decay means that almost all hafnium 182 will disappear in 50 million years, providing a way to assemble a fine-scale chronology of early events in the solar system.

The latter was well known from analyses of martian meteorites, but not the former.

Previous estimates of the formation of Mars ranged as high as 15 million years because the chemical composition of the martian mantle was largely unknown.

Scientists still wrestle with large uncertainties in the composition of Earth’s mantle because of processes such as melting.

“We have the same problem for Mars,” Dauphas said. 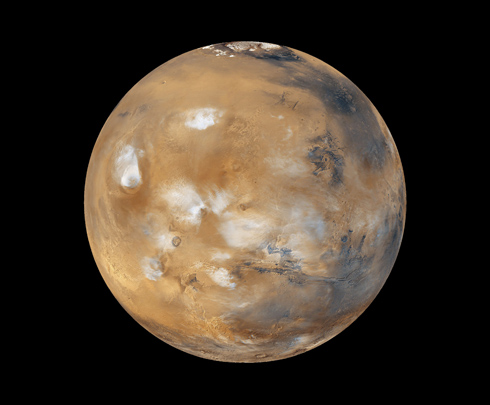 Mars is some 4,221 miles in diameter; Earth's diameter is 7,926 miles, about twice that of Mars. Image credit: NASA

Analyses of martian meteorites provide clues about the mantle composition of Mars, but their compositions also have changed.

Solving some lingering unknowns about the composition of chondrites, a common type of meteorites, provided the data needed.

As essentially unaltered debris left over from the birth of the solar system, chondrites serve as a Rosetta stone for deducing planetary chemical composition.

Cosmochemists have intensively studied chondrites, but still poorly understand the abundances of two categories of elements they contain, including uranium, thorium, lutetium and hafnium.

Dauphas and Pourmand analyzed the abundances of these elements in more than 30 chondrites, and compared those to the compositions of another 20 martian meteorites.

The relative size of the inner planets of our solar system: Mercury, Venus, Earth and Mars. Image credit: Lunar and Planetary Institute

“Once you solve the composition of chondrites you can address many other questions,” Dauphas said.

Hafnium and thorium both are refractory or non-volatile elements, meaning that their compositions remain relatively constant in meteorites.

They also are lithophile elements, those that would have stayed in the mantle when the core of Mars formed. If scientists could measure the hafnium-thorium ratio in the martian mantle, they would have the ratio for the whole planet, which they need to reconstruct its formation history.

The relationships between hafnium, thorium and tungsten dictated that the hafnium-thorium ratio in the mantle of Mars must be similar to the same ratio in chondrites.

“Why do you do that? Because thorium and tungsten have very similar chemical behavior,” Dauphas said.

Once Dauphas and Pourmand had determined this ratio, they were able to calculate how long it took Mars to develop into a planet.

A computer simulation based on these data showed that Mars must have reached half its present size only two million years after the formation of the solar system.

“New application of radiogenic isotopes to both chondrite and martial meteorites provides data on the age and mode of formation of Mars,” said Enriqueta Barrera, program director in NSF’s Division of Earth Sciences. “That is consistent with models that explain Mars’ small mass in comparison to that of Earth.”

A quickly-forming Mars would help explain the puzzling similarities in the xenon content of its atmosphere and that of Earth’s.

“Maybe it’s just a coincidence, but maybe the solution is that part of the atmosphere of Earth was inherited from an earlier generation of embryos that had their own atmospheres, maybe a Marslike atmosphere,” Dauphas said.

The short formation history of Mars further raises the possibility that aluminum 26, which is known from meteorites, turned the red planet into a magma ocean early in its history.

Aluminum 26 has a half-life of 700,000 years, so it would have disappeared too quickly to contribute to the internal heat of Earth.

If Mars formed in two million years, however, significant quantities of aluminum 26 would remain. “When aluminum 26 decays it releases heat and can completely melt the planet,” Pourmand said.

The research was also funded by the National Aeronautics and Space Administration and the Packard Foundation.