Making it easier to do something “life-changing”

It’s noon on a Friday, but a group of Microsoft employees are focused on something more important than lunch. They’ll spend the next hour helping a local nonprofit that’s working to give impoverished children with a common birth defect the ability to walk for the first time.

“Micro-volunteering” efforts like this give employees a convenient way to do something meaningful without extensive training, an ongoing commitment or, in many cases, even leaving the Microsoft campus. They’re one way to give at a company deeply committed to doing just that.

“This is part of the reason why I came to work here. Microsoft is an excellent organization that really cares what’s going on around the world,” says Mia Kim, human resources manager for the company’s Applications and Services Group. “I’m excited that I can come out during my lunch break and do this.” 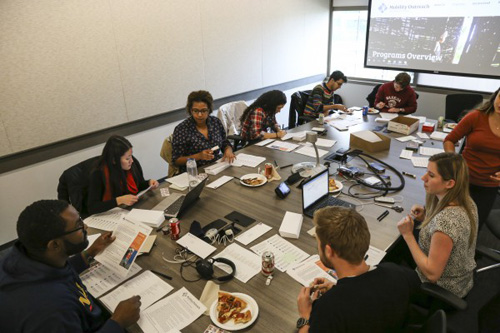 Employees gather to give back on the Microsoft Redmond campus. Image credit: Microsoft

Giving is serious business at Microsoft; the company has one of the largest employee giving programs in the world. It raised $117 million for more than 20,000 nonprofits around the world last year alone.

Microsoft matches each employee cash, product or stock donation, doubling the impact, and contributes $25 for every hour that each employee devotes to volunteering.

Employees are free to choose the causes closest to their hearts, whether aiding disaster-stricken regions, helping kids further their education, supporting the arts in their own communities or dedicating resources to countless other areas of need.

Giving hits high gear every October, when employees across the U.S. participate in philanthropic activities such as a 5K race, a pancake-making contest, an online auction and other fun events that raise money for nonprofits in the month-long Employee Giving Campaign. Microsoft selects seven employees to lead the effort, giving them four months away from their usual roles to learn about nonprofits’ needs and inspire their colleagues to help.

Yet employee giving remains a year-round focus, continuing through the holiday season. Microsoft is a big supporter of Giving Tuesday. Employees donate gifts to kids and others in need through a company Giving Tree program and join other charitable efforts during this time of year, which Kim calls “a time of gratitude.”

On the recent Friday, the cause was Mobility Outreach International, a nonprofit that helps health care workers provide prosthetics, orthotics and treatment for children who were born with club foot, as well as people who have lost limbs, in Haiti, Vietnam, Bangladesh and Sierra Leone.

In a conference room on Microsoft’s Redmond campus, the employees learned about the nonprofit’s work as they penned notes and addressed envelopes for holiday cards thanking donors for their ongoing support. The simple task will help fundraising efforts for the nonprofit, which has just five people working in its Seattle office.

Marion McGowan, the nonprofit’s executive director, says Microsoft employees’ help with tasks that require a larger team “provides a double impact” — it helps the nonprofit get the jobs done, and the company’s matching donation gives the nonprofit a financial boost at the same time.

“Microsoft has one of the most generous giving strategies found in the corporate world,” McGowan says. “The fact that they not only match employee donations, but also their volunteer hours, makes a huge impact. It is also encourages Microsoft employees to take the time to volunteer, since they recognize that their time equates to money for the mission of an organization.”

Julie Olden, a finance manager for Xbox, organized the effort and others like it, connecting nonprofits that need help with Microsoft employees who are excited to provide it. In recent months, she’s led efforts to write letters to low-income teens heading to college, help people learn CPR and more.

Such efforts are “a great opportunity to get more people actively involved in volunteering,” she says. “There couldn’t be a more convenient way for us to give back to the community.”

Olden considers the company’s support of such efforts a huge benefit of working for an organization that is so committed to making a difference.

“It really distinguishes Microsoft as an employer,” she says. “There are not a lot of companies that do donation matching, much less that match employees’ volunteer hours.”

Hard at work on the holiday cards, Taj Mathews says it’s the first time he’s joined one of the micro-volunteering efforts — and it won’t be his last. He thinks it’s an incredible opportunity.

Mathews, a project marketing manager for Cloud and Enterprise marketing, seeks out ways to give back because his first connection to Microsoft was through a nonprofit. Years ago, as a high school kid involved with the Boys & Girls Clubs of America, he went through a summer program to learn about entrepreneurship and technology. He met mentors at Microsoft and landed a summer internship at the company.

After serving in the military and going to graduate business school, he says, he “knew that Microsoft was a place I was really interested in coming back to.” A big part of his motivation was the company’s commitment to giving.

“I’m really passionate about it,” he says, “and it’s actually one of the main reasons why I work here today.”

Cassandra Young, an implementation specialist for Microsoft Global Learning and Development, worked for a nonprofit earlier in her career and is grateful she’s “able to maintain that passion at Microsoft.”

“I love the accessibility — being able to duck out on my lunch hour and give back,” she says. “Volunteering has always been really important to me.”

Kim is enthusiastic about volunteering for Mobility Outreach International because the work means “helping children and improving the quality of people’s lives,” she says.

“I just feel like we’re doing something really impactful and life-changing,” she says. “It’s been a fantastic opportunity, and I will keep coming.”