WASHINGTON — The deadly Russian heat wave of 2010 was due to a natural atmospheric phenomenon often associated with weather extremes, according to a new study. And while the scientists could not attribute the intensity of this particular heat wave to climate change, they found that extreme heat waves are likely to become increasingly frequent in the region in coming decades.

The research team drew from scientific observations and computer climate models to evaluate the possible roles of natural and human-caused climate influences on the severity of the heat wave. The study has been accepted for publication in Geophysical Research Letters, a journal of the American Geophysical Union.

“Knowledge of prior regional climate trends and current levels of greenhouse gas concentrations would not have helped us anticipate the 2010 summer heat wave in Russia,” said lead author Randall Dole of NOAA’s Earth System Research Laboratory (ESRL) in Boulder, Colo. “Nor did ocean temperatures or sea ice status in early summer of 2010 suggest what was to come in Russia.”

Temperatures in the upper 90s to above 100 degrees Fahrenheit (35 to 45 degrees Celsius) scorched western Russia and surrounding areas from July through mid-August, 2011. In Moscow, the long-term daily average temperatures for July range from 65 to 67 F (18-19C); in 2010, daily average July temperatures soared up to 87F (31C). Daily average temperatures include the night. The exceptional heat over such a long duration, combined with poor air quality from wildfires increased deaths by at least 56,000 in Moscow and other parts of western Russia, according to Munich Reinsurance, and led to massive crop failures in the region. 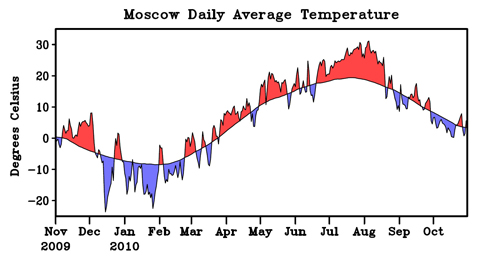 While a contribution to the heat wave from climate change could not be entirely ruled out, if it was present, it played a much smaller role than naturally occurring meteorological processes in explaining this heat wave’s intensity.

The researchers cautioned that this extreme event provides a glimpse into the region’s future as greenhouse gases continue to increase, and the signal of a warming climate, even at this regional scale, begins to emerge more clearly from natural variability in coming decades. Climate models evaluated for the new study show a rapidly increasing risk of such heat waves in western Russia, from less than one percent in 2010, to 10 percent or more by the end of this century.

“It appears that parts of Russia are on the cusp of a period in which the risk of extreme heat events will increase rapidly,” said co-author Martin Hoerling, also from ESRL.

Dole, who is also with the Cooperative Institute for Research in Environmental Sciences (CIRES) at the University of Colorado at Boulder, called the intensity of this heat wave a “climate surprise,” expected to occur only very rarely in Russia’s current climate. With the possibility of more such events in the future, studying the Russian event better prepares scientists to understand climate phenomena that will affect the U.S. and other parts of the globe. 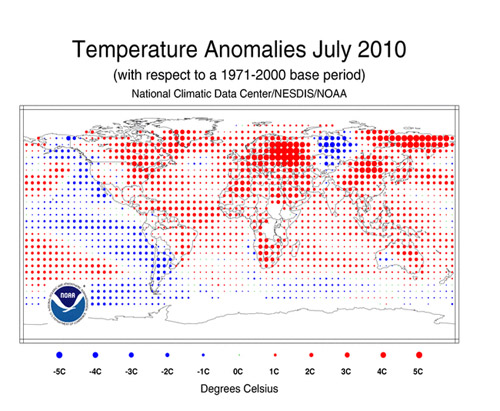 Map of observed global temperature anomalies for July 2010, from NOAA analyses produced by the National Climatic Data Center (NCDC). Anomalies are determined with respective to the base period 1971 to 2000. Photo credit: NOAA

The team — led by Dole, Hoerling, and Judith Perlwitz from CIRES — sifted through long-term observations and results from 22 global climate models, looking for trends that might help explain the extraordinarily high temperatures in western Russia during the 2010 summer. They also ran atmospheric models that used observed global sea surface temperatures, Arctic sea ice conditions and atmospheric carbon dioxide concentrations in 2010 to assess whether such factors might have contributed to the heat wave.

The heat wave was due primarily to a natural phenomenon called an atmospheric “blocking pattern”, in which a strong high pressure system developed and remained stationary over western Russian, keeping summer storms and cool air from sweeping through the region and leading to the extreme hot and dry conditions. While the blocking pattern associated with the 2010 event was unusually intense and persistent, its major features were similar to atmospheric patterns associated with prior extreme heat wave events in the region since 1880, the researchers found.

They also found that western Russia has not experienced significant climate warming during the summer season over the 130 years from 1880 to 2009, despite significant warming of globally averaged temperatures during that time. Such a “warming hole” is not unique to that region and is not entirely unexpected, as the Earth is not uniformly warming and experiences distinct geographic areas that may be warmer or cooler than the average trend.

“We know that climate change is not taking place at the same rate everywhere on the globe,” said Hoerling. “Western Russia is one of the parts of the world that has not seen a significant increase in summertime temperatures. The U.S. Midwest is another.”

Dole compared his team’s findings to trying to hear a quiet conversation underneath the roar of a noisy fan: a summertime signal due to climate change over western Russia was drowned out by the much larger climate “noise,” or variability, resulting from natural processes.

Another study also accepted for publication in Geophysical Research Letters finds that the heat wave’s initial stage, from June through nearly the end of July, could have been predicted in advance, but not its continuation well into August. In a retrospective investigation of forecasts by five different weather forecasting centers, Mio Matsueda of the Japan Agency for Marine-Earth Science and Technology, in Tsukuba, concludes that the first phase of the atmospheric blocking responsible for the heat wave could have been predicted even nine days in advance. But the forecast centers later err by indicating a breakup of the blockage starting on July 30. In fact, the phenomenon persisted until August 9.