One of Japan’s most active volcanoes could be close to a major eruption, threatening the safety of hundreds and thousands of residents of a nearby city, a new study has shown.

A team of experts developed pioneering techniques to map the natural ‘plumbing system’ of Sakurajima volcano, on the south-west tip of the East Asian country, to discover a substantial growing magma reserve. 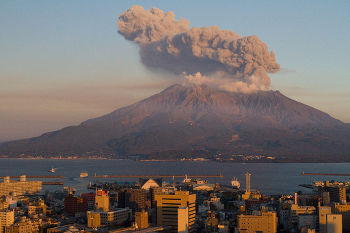 Sakurajima, right across Kagoshima, one of the most active volcanoes in the world. Image credit: Kimon Berlin (Source: Wikipedia)

The magma build-up could see the volcano repeat its deadly eruption of 1914, which killed 58 people and caused widespread flooding in the nearby city of Kagoshima – dubbed the ‘Naples of the Eastern World’.

The team believe the ground-breaking study could help improve eruption forecasting and hazard assessment at volcanoes across the world, providing an enhanced early-warning system for potential eruptions.

Dr James Hickey, lead author of the study and who is now at the Camborne School of Mines, at Exeter’s Penryn Campus, Cornwall, said: “What we have discovered is not just how the magma flows into the reservoir, but just how great the reservoir is becoming.

We believe that this new approach could help to improve eruption forecasting and hazard assessment at volcanoes not just in this area, but worldwide. We know that being forewarned means we are forearmed and providing essential information for local authorities who can potentially help save lives if an eruption was imminent.”

The international team of scientists focused their study around Aira caldera – a large, submerged crater caused by the violent explosion and subsequent collapse of a voluminous magma reservoir.

This vast crater acts as a magma storage zone that feeds the nearby Sakurajima volcano, one of the island’s most active volcanoes with small, localised eruptions occurring nearly every day.

The team, which included experts from the University of Bristol and the Sakurajima Volcano Research Centre in Japan, studied surface deformation in and around the caldera and volcano.

By combining recent GPS deformation measurements with other geophysical data and advanced 3D computer models, the team were able to reconstruct the magma plumbing system beneath the caldera.

The study showed that the volcano is being supplied with around 14 million cubic metres of magma each year – which equates to roughly three-and-a-half times the volume of Wembley Stadium.

Crucially, the research also indicates magma is being supplied to the system at a faster rate than it can be released through regular, small eruptions from Sakurajima volcano.

The team believe that this excessive build-up of magma may indicate there is growing potential for a larger eruption.

Dr Hickey, who carried out the research while at the University of Bristol, added: “The 1914 eruption measured about 1.5 kilometres cubed in volume – a massive event. From our data we think it would take around 130 years for the volcano to store the same amount of magma for another eruption of a similar size – meaning we are around 25 years away.”

“By identifying a timeframe over which we may see an increase in the level of activity at the volcano our colleagues at the Sakurajima volcano research centre can plan accordingly. The numerical constraints we were able to put on the magma supply conditions can also be used to assist with probabilistic and quantitative eruption forecasting.”

Co-author Dr Joachim Gottsmann, from the University of Bristol added: “A thorough understanding of the rate and volume of magma supply and accumulation, and their thermomechanical controls, is essential for continued monitoring and eruption forecasting at Sakurajima volcano, and volcanoes worldwide.”

Dr Haruhisa Nakamichi, Associate Professor at the Disaster Prevention Research Institute, Kyoto University, and co-author, said: “It is already passed by 100 years since the 1914 eruption, less than 30 years is left until a next expected big eruption, Kagoshima city office has prepared a new evacuation plan from Sakurajima, after experiences of evacuation of the recent crisis in August 2015.”

This study was funded by the European Commission VUELCO project, the University of Bristol International Strategic Fund, and the Ministry of Education, Culture, Sports, Science and Technology (MEXT) of Japan.