Evolutionary biologists at the University of Toronto have found that individuals with low-quality genes may produce offspring with even more inferior chromosomes, possibly leading to the extinction of certain species over generations.

Their study, published in Proceedings of the National Academy of Sciences, predicts that organisms with such genetic deficiencies could experience an increased number of mutations in their DNA, relative to individuals with high-quality genes. The research was done on fruit flies whose simple system replicates aspects of biology in more complex systems, so the findings could have implications for humans.

“Mutations play a key role in cancer and other health problems affecting humans and other species,” said Nathaniel Sharp, PhD candidate in U of T’s Department of Ecology & Evolutionary Biology (EEB) and lead author of the study. “Our research suggests that the problem is likely to compound over time, leading to a mutational meltdown that may devastate endangered populations, and increase the risk of health problems in families in poor condition.” 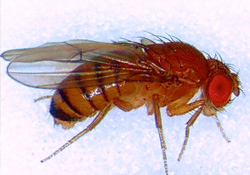 Sharp and EEB professor Aneil Agrawal examined the accumulation of mutations in the fruit fly Drosophila melanogaster, the genes of which are arranged on three major chromosomes.

To manipulate genetic quality, they introduced harmful mutations onto the fly’s third chromosome. They then observed how the presence of these mutations affected the fitness of the second chromosome over 46 generations.

While the underlying mechanism remains unknown, it could be tied to how an affected individual is less capable of repairing DNA or is more susceptible to DNA damage.

Fruit flies are especially useful for genetic studies such as this for the ability to screen for thousands of genes in thousands of flies much faster than in mammals. Flies are inexpensive to care for and reproduce rapidly, allowing for several generations to be studied in just a few months.

The researchers do, however, offer a more positive possible result of the process. “An elevated mutation rate under conditions of genetic or environmental stress could also accelerate adaptation to new environments,” said Sharp.

The findings are reported in the paper Evidence for Elevated Mutation Rates in Low-quality Genotypes. The research is supported by funding from the Natural Sciences and Engineering Research Council of Canada in the form of a Discovery Grant to Agrawal and a Vanier Scholarship to Sharp.