A theoretical study led by the University of Exeter has shed new light on the conditions that lead to the evolution of spite or altruism in structured populations.

Understanding the way in which social behaviours such as altruism – when animals benefit others at their own expense – develop is a long-standing problem that has generated thousands of articles and heated debates.

Dr Florence Débarre of Biosciences at the University of Exeter led a study, published in Nature Communications, which presents a comprehensive framework that applies to a large class of population structures and identifies the crucial elements which support the evolution of social behaviour. 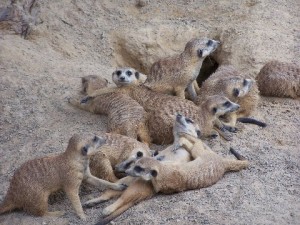 Structured populations are those exhibiting either spatial or social structure. This can range from animals living in social groups – like meerkats – to bacteria in biofilms.

In these populations altruism evolves if, for individuals, the social benefit of living next to others outweighs the costs of competing against them.

Dr Débarre and her collaborators combined these two features in their model, which revealed new insights. It turns out that helping your neighbours reproduce more or helping them live for longer does not have the same indirect consequences on your own fitness. These indirect consequences are crucial, and determine which type of social behaviour (helping, harming or doing nothing) can evolve.

When competition is fierce because space is so limited that an individual can only reproduce after some space has been freed up by the death of a neighbour, the researcher’s results show that the social behaviours that are most advantageous are the ones in which individuals make their neighbours die sooner but at the same time help them reproduce. In other terms, the interaction is spiteful when it comes to survival, but altruistic on fecundity.

Dr Débarre, who is based at the University of Exeter’s Penryn Campus in Cornwall, said: “In structured populations, social behaviour evolves if, for social individuals, the net social benefit of living next to other social individuals outweighs the costs of competing against them. We show that the latter depends on the way the population is updated, the type of social game that is played, and on how social interactions affect individual fertility and survival.

“There are ongoing and sometimes very heated debates on which mechanisms favour the evolution of social behaviour. Our mathematical framework also aims at reconciling these different approaches, and shows that they mainly correspond to different viewpoints of the same questions, depending on if we want to give explanations in terms of who is giving benefits to others, or who is receiving benefits.”

The article, ‘Social evolution in structured populations’, by F. Débarre, C. Hauert & M.Doebeli, is published in the latest edition of Nature Communications.