It was poring through archives of the Zoological Society of London that gave Virginia Bradley the idea.

She asked officials of the society, dedicated to animal conservation and research, if she could be their artist-in-residence. They accepted, and this year the UD professor of art became their first.

“At first they didn’t know what to do with me,” Bradley said, but she has thrived.

Bradley also spent fall semester in an associate artist residency at London’s Acme International Residency Programme. Her mixed media paintings — which are printed, drawn, sanded, poured, waxed and carved to create hide-like tapestries on paper — will be on exhibit from Dec. 6-8 at Acme Project Space. 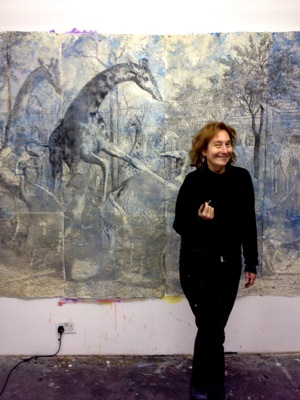 The pieces in the exhibit were inspired by the images she found at the Zoological Society.

“I am quite interested in research and working with animals — and especially endangered species,” Bradley said.

Her work explores the intersection of art and science, of nature and the man-made world. From her exhibit description:

“Bradley has long-standing interest in colonial natural history imagery and is intrigued by the instinct or ‘sixth sense’ that animals possess, as well as their primordial sense of purity and beauty. An animal’s innate instinct for survival correlates to the intuitive process that is active in her painting.”

Her final piece depicts a scene in which panicked animals seem on the verge of stampede next to a developed road, a large giraffe stealing the attention. 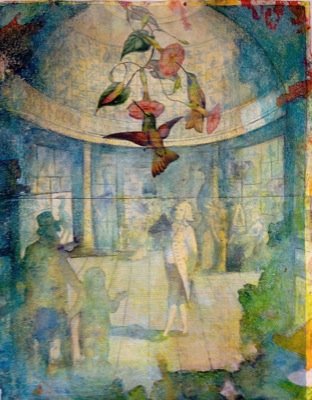 “I am usually project-based,” Bradley explained, and she is always on the lookout for historic engravings and plates that “fit together natural phenomenon and water and man’s desires to overtake” the natural world.

For instance, in 2011 she did a piece inspired by the “horrific yet so beautiful” images on the front of The New York Times after the tsunami in Fukushima, Japan. She merged these images with those from a book of engravings from 15th century Venice.

Since starting her residency in London, Bradley hasn’t had much spare time, though she did give a talk at an alchemy conference in Greece focused on the practice of contemporary visual art.

The society has also invited her back next summer to create a mural in its okapi house. If a giraffe and a zebra collided at high speed, it might create the okapi, an African rain forest mammal that is shorter than its long-necked relative.

If she can find the funding, she will return to produce the 8-foot-long and 28-foot-high public piece, working with three British students and three refugee students from the Democratic Republic of the Congo, where the okapi lives.

Bradley said she is incredibly thankful for the support she has received from UD while she fulfills her short sabbatical. Her talk in Greece and her work in London were possible because of funding support from the General University Research program and the College of Arts and Sciences.

“I wouldn’t have been able to do this research that is really making a difference to me professionally and to my students when I get back,” she said. She will be able to educate them on the London art scene and she has made new connections through her public art, she added.

And, she has been refreshed.

But she is ready to get back home next month. She misses her Welsh terrier, Piccadilly.