Since 2015 Croatia has its first female leadership – Kolinda Grabar-Kitarović. Although internationally not so well known like the German Chancellor Angela Merkel or the British Prime Minister Theresa May because of the Balkan state’s geographic position and less military significance in international politics, but the 49 years old Croatian President is an experienced diplomat and speaks almost every European language – English, Spanish, Portuguese, German, Italian and French.

Beginning of this week the Croatian leader started her two days official visit to Russia at the invitation of President Vladimir Putin. 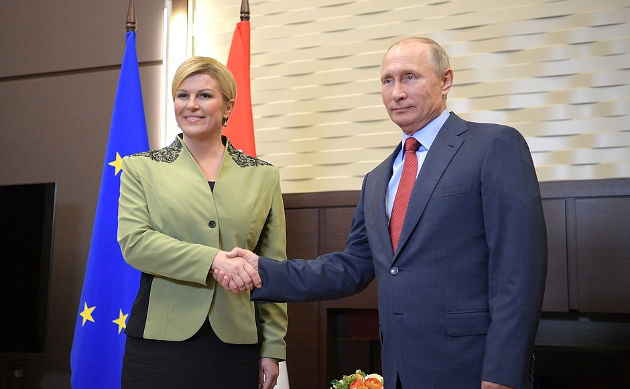 The two leaders met at Sochi.

Croatian leader to President Putin:„I am particularly pleased about this because Sochi is often compared to Opatija, the cradle of Croatia’s tourism industry.“

„Croatia is a popular travel destination among Russian tourists. Last year it was visited by 56,000 Russians“ told the Russian President in a joint press conference with President Kolinda Grabar-Kitarović.

In her statement President Kolinda Grabar-Kitarovic mentioned among others: „Let me mention one of our compatriots – Robert Bartini who was born in Rijeka. He was a truly brilliant aircraft designer but it is much less known that this outstanding scientist made a large contribution to the aviation and space industry.

He worked with the teams of Grigorovich, Tupolev, Tomashevich and Beriyev. The official founder of Russian cosmonautics Sergei Korolev called this genius his teacher. It was owing to Bartini’s help, knowledge and advice that Yury Gagarin became the first cosmonaut.“