A study of data from hundreds of soil samples taken around six old water tower sites in southern Rhode Island finds that even when lead levels on the surface are low, concentrations can sometimes be greater at depths down to a foot. The findings inform efforts to assess the effect of lead paint from old water towers on surrounding properties.

PROVIDENCE, R.I. [Brown University] — A newly published analysis of data from hundreds of soil samples from 31 properties around southern Rhode Island finds that the lead concentration in soil at the surface is not always a reliable indicator of the contamination a foot deeper. The study, led by Brown University Superfund Research Program researchers at the request of the Rhode Island Department of Health (RIDOH), informs ongoing efforts to assess the impact of the state’s legacy of lead-painted water towers.

Towers all over the state, including at six sites analyzed in the study, were often coated with lead paint until the practice stopped in 1979. Over time paint could flake off onto properties below. In 2004, residents near a water tower in Westerly, known as “Site 19,” learned that some local properties become contaminated, leading to investigations that highlighted differences in the standards of RIDOH and the Rhode Island Department of Environmental Management (RIDEM).

One key difference between the regulations is whether they require looking at depths below the soil surface to determine whether remediation is required. RIDEM requires that but RIDOH does not. 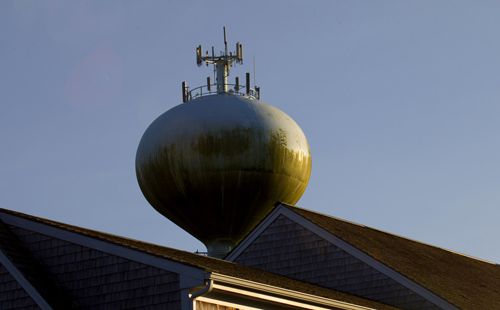 The main finding of the new study, published in the journal Science of the Total Environment, is that solely looking at surface contamination would have missed higher lead concentrations at lower depths in soil core samples from four of the 31 properties. In other words, samples on 13 percent of the properties could have been classified by RIDOH standards as “lead-safe,” when higher than lead-safe concentrations lurked either six or 12 inches beneath the surface. (RIDOH defines lead-safe as a lead concentration of more than 150 milligrams per kilogram in soil but less than 400 milligrams per kilogram).

Importantly, because multiple samples were taken on each property, no property was ever actually misclassified, according to the analysis, said lead author and Brown researcher Marcella Thompson. In all, the study considered data from 498 samples, including 348 with soil at depths of six and 12 inches.

Still, Thompson said, the findings are important because the health stakes of exposure to lead are so high. Lead exposure has known neurobehavioral and neurodevelopmental consequences for people and animals. For every 1,000 mg/kg increase in lead-soil contamination, blood lead levels can rise 1 µg/dL to 5 micrograms per deciliter, Thompson said. The greater the exposure, the greater the potential for harm, particularly to children.

“Especially when you are talking about children’s health and the health of the people who live there, one mistake is one too many,” Thompson said. “Better safe than sorry. If there is a potential for [misclassification] to occur, we should take the more conservative route.”

A surprising finding of the study, Thompson said, was that significant amounts of lead were sometimes able to accumulate as far as 400 hundred feet from the water towers. The direction-specific patterns she and her co-authors observed suggest that wind carried paint flakes over those distances.

“In general it became rather apparent which way the wind blew,” she said. 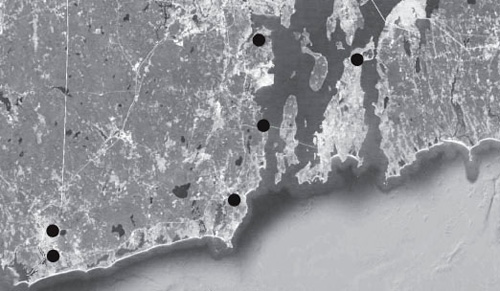 Practice-based evidence. Researchers studied the ground beneath six of the many old water towers around Rhode Island. They determined that unsafe levels of lead could occur six or 12 inches below ground even when the surface was acceptable. Image credit: Brown University

Bob Vanderslice, toxicologist and team lead for Healthy Homes and Environment at RIDOH, said the department asked the researchers to conduct the study based on the questions posed by Westerly residents in the vicinity of the town’s water tower.

Now that the study is done, Vanderslice said, it confirms RIDEM’s methodology and will inform that of RIDOH.

“The results of this study indicate that concerns about the DEM methodology were not warranted. The DEM sampling methodology correctly identified all properties that needed remediation,” he said. “The study provides recommendations for the Department of Health to consider in revising its Rules and Regulations for Lead Poisoning Prevention, including to evaluate soil standards to ensure that they protect children from reaching blood levels of five micrograms per deciliter, the more recently adopted level of concern, and to ensure that the sampling methodology adequately addresses the possibility that surface soil samples may not identify lead hazards at depth.” Thompson said the study provides a good example of how policies such as those of RIDOH, which are informed by sound scientific evidence and theory, can still be further informed by real-world field assessment, a process called “practice-based evidence.”

The study’s recommendations for future contamination monitoring efforts in Rhode Island include sampling soil at multiple depths and farther away than 200 feet, depending on prevailing winds and tower height. The authors also call for state agencies to sample from properties around other old water towers, to adopt more uniform definitions of terms, and to update standards to reflect new stricter exposure guidelines from the U.S. Centers for Disease Control and Prevention.

In addition to Thompson, other authors on the paper are Kim Boekelheide, professor of pathology and laboratory medicine at Brown, and University of Rhode Island nursing student Andrea Burdon.