Learning From our Mistakes is Hardwired

The study, which will appear in an upcoming issue of Psychological Science, is the first to show a fundamental difference between these two groups.

“This finding is exciting in that it suggests people who think they can learn from mistakes have brains that are more tuned to pick up on mistakes very quickly,” said Jason Moser, assistant professor of clinical psychology and lead researcher on the project. 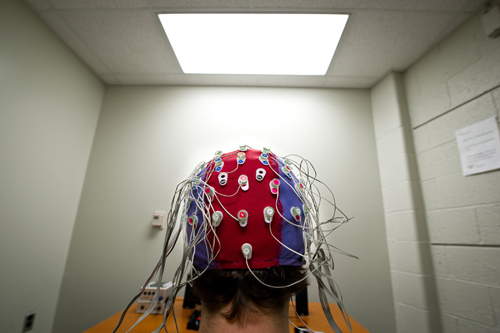 A cap worn by subjects in a Michigan State University experiment picks up EEG signals at the scalp; the signals are then transmitted via optical cable to a computer where the data is stored for analysis. The experiment deals with people learning from mistakes. Photo by G.L. Kohuth

Moser said the findings could have implications for students or workers who could benefit from training programs designed to help people learn more from their mistakes and put in more effort after their mistakes.

“Instead of just asking people whether they think they can learn from their mistakes or not, we’d use their brain activity to decide who needs the ‘I think I can’ training,” Moser said.

In the experiment, participants were given a task that was easy to flub. They were supposed to identify the middle letter of a five-letter series like “MMMMM” or “NNMNN.” Sometimes the middle letter was the same as the other four; sometimes it was different.

“It’s a pretty simple task, doing the same thing over and over, but the mind can’t help it; it just kind of zones out from time to time,” Moser said. 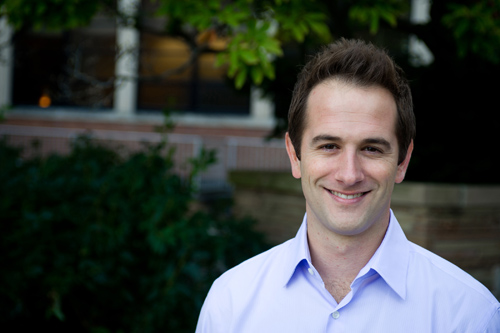 A study led by Jason Moser, assistant professor of psychology, suggests that learning from our mistakes is hardwired. Photo by G.L. Kohuth

The participant wore a cap that records electrical activity in the brain. When someone makes a mistake, their brain makes two quick signals: an initial response that indicates something has gone awry – Moser calls it the “oh crap response” – and a second that indicates the person is consciously aware of the mistake and is trying to right the wrong.

Their brains also reacted differently, producing a bigger second signal, the one that says “I see that I’ve made a mistake, so I should pay more attention,” Moser said.