ANN ARBOR — Employees who expose unethical behavior in organizations often face retaliation for speaking up. But company leaders who blow the whistle on such activity are less likely to be sanctioned, University of Michigan researchers say.

In fact, in some cases, leaders can even be ostracized if they don’t speak up, they say.

“It’s really more nuanced than we’re led to believe,” said David Mayer, associate professor of management and organizations at U-M’s Ross School of Business. “Even though we often hear negative things about business leaders in the media, we still have positive expectations of them. One of those expectations is that they speak out on ethical issues.” 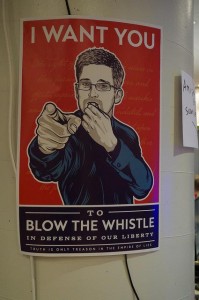 In a new study appearing in the Journal of Applied Psychology, Mayer and colleagues exposed people to unethical behavior—for instance, cheating on a virtual team task—and then explored how they viewed others who spoke out about the unethical conduct. The researchers manipulated the leadership status of the people who spoke out.

When the individuals who spoke up did not occupy a leadership position, they were seen as more hostile and unfriendly than those who did not say anything about the unethical activity. However, this effect was reduced for leaders. In one experiment, leaders who spoke up were thought of more highly.

“What this shows is that we have different expectations for how leaders and nonleaders should behave during ethical dilemmas.” said Ned Wellman, a Ross School alum who now is an assistant professor at Arizona State University. “One interesting point is that the leaders in our studies did not always have formal authority over the participants—in some cases they just had a title. That suggests simply occupying a formal leadership position can help reduce the costs of speaking up, even if that position is not directly relevant to the ethical issue.”

Mayer said it’s important to study the phenomenon because it can lead to organizations figuring out ways to prevent the so-called whistleblower penalty.

“People who speak up about ethical problems are courageous individuals, but it can go badly for them,” he said. “Although negative reactions happen some of the time, we find that other times people are inspired by the bravery of people who speak up. So the better we understand the conditions that reward whistleblowers, the better we all can learn to be our best moral self and be respected for it, not penalized, and to improve the ethicality of organizations.”

Other researchers who worked on the study include Scott DeRue, professor of management and organizations at the Ross School of Business, and Ross doctoral student Madeline Ong.