By drawing from her own life experiences, the incoming first-year Brown student hopes to positively impact individuals and communities through dedicated research in the social sciences.

PROVIDENCE, R.I. [Brown University] — Lavleen Madahar will be the first to tell you she’s a people person.

It makes sense. The incoming first-year Brown undergraduate, a member of the newly welcomed Class of 2026, grew up immersed in her family’s small business: the only gas station and convenience store around for miles in a rural part of New Jersey. As a young child, she’d sit in the store alongside her father, meeting a rotating cast of characters on a daily basis and developing an unapologetic love of — and a keen knack for — people-watching.

“I love guessing and learning about peoples’ stories,” she said. “There’s so much that a stranger can teach you.”

So, naturally, she’s spent her life learning about them.

As a high school junior, Madahar served as a research intern at the American Labor Museum, where she was inspired by stories of “ordinary” people banding together to advocate for a common goal. She dived into researching historical relationships between workers and union associations, and was eventually entrusted with the opportunity to create her own exhibit. 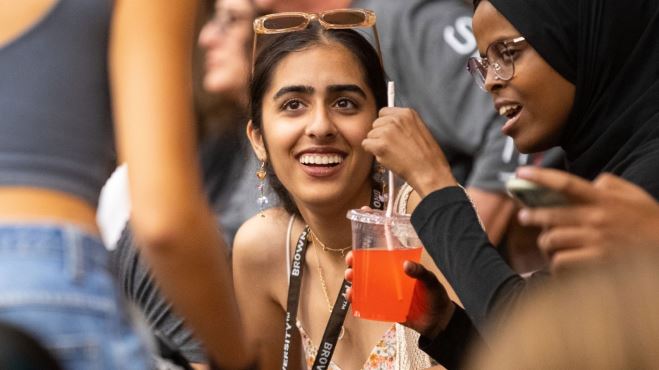 Using part of a grant administered by the Passaic County Cultural and Heritage Council and funds from the New Jersey State Council on the Arts and the New York City chapter of the Labor Council for Latin American Advancement, Madahar curated “Latinx Workers of the U.S.: Their Journeys and Accomplishments,” which is still on view at the museum through the end of the year.

“I interviewed labor leaders and ordinary workers, prioritizing the firsthand experiences of others,” Madahar said. “I was compiling data into charts, sorting old artifacts and learning about the history of all these workers in my state along the way.”

That experience solidified her drive to study social sciences, though she said she’s taking advantage of the University’s “shopping period” to explore different courses and narrow down prospective concentrations in international and public affairs, sociology, or other areas where she can investigate social inequality or the myriad impacts of rapid urbanization.

It’s no surprise that during the college application process, she was immediately drawn to Brown’s Open Curriculum, through which students develop a personalized course of study rather than completing a pre-determined set of core courses.

“I want to explore so many different fields and gain different perspectives — it’s kind of like I’m continuing people-watching on a larger scale,” Madahar said. “It’s perfect for me.”

A journey marked by challenges and opportunities

Madahar was so sure of her college choice that she applied early decision, and when she received her acceptance notification, hardly 24 hours had passed before she and her father were on the road to Providence to visit campus. She said that within minutes of stepping on the College Green, taking in the sights and sounds — and spotting a group of students playing spikeball — she knew she made the right choice.

But it took much more to finally make it to campus.

“I definitely have imposter syndrome,” she said. “I’m a first-generation college student and the oldest of three children, so I didn’t really have anyone to look to when it came to the whole college application process.”

When it was time to begin her journey at Brown, Madahar enrolled in the Brown Center for Students of Color’s Third World Transition Program. During the three-day Pre-Orientation program, she found a community of students from both different and similar backgrounds, made meaningful connections before courses began, and learned about navigating institutions of higher education from older students who were once in her shoes.

“I feel like I both under- and overestimated the people here,” she said. “I thought I was going to come in very intimidated by everyone’s accomplishments, but everyone has been so welcoming. They’re open to everyone.”

While she aims to emulate that same openness at Brown, both socially and academically, Madahar already has an idea about where her path may eventually lead: the legal field, specifically dealing with immigration and civil rights.

“Coming from a family of immigrants, I’ve seen the struggles this population faces firsthand,” she said.

The legal elements of the immigration process are complicated and lengthy, and Madahar said it was difficult to stay optimistic while she knew her family members in Punjab, India, were checking their immigration status every day for years with little to no progress on their cases. And when their visas were finally approved and her family arrived in the United States, “they faced so many barriers, like cultural and language differences as well as a lack of access to many resources and opportunities,” she said.

She says the opportunity to study at Brown will motivate her throughout the next four years and prepare her for whatever lies ahead.

“I want to use my privilege as a first-gen college student ­— as a child of immigrants who really understands these issues — to give back to the community that raised me,” Madahar said.