A new study by Michigan State University researchers, which appears in Proceedings of the Royal Society, revealed this as well as defined a new way to measure spotted hyenas’ size.

“This is the first study of its kind that provides an estimate of lifetime selection on a large carnivore,” said MSU graduate student Eli Swanson, who published the paper with MSU faculty members Ian Dworkin and Kay Holekamp, all members of the BEACON Center for the Study of Evolution in Action. “In short, we were able to document that larger female hyenas have more cubs over their lifetime than do smaller females as well as develop a novel approach for estimating body size.”

Size can be one of the most important traits affecting an animal’s life. It influences eating, getting eaten, speed and agility, and attractiveness to potential mates. However, overall height and weight measurements may not capture differences in more specific traits like leg length that might be more important in survival.

To identify the most-important traits, researchers sedated hyenas in Kenya and took 13 measurements on each subject, including total body length, skull size and leg length. They found that while overall size didn’t affect reproductive success, some clusters of traits did. They also learned that the length of the lower leg, the height at the shoulder and body length were all individually associated with more reproductive success. 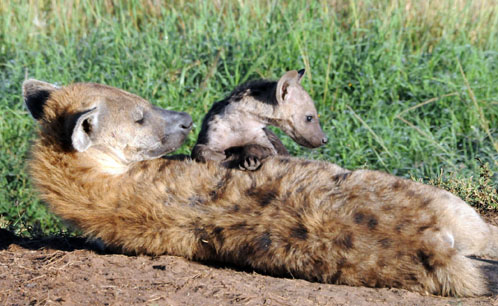 Researchers at MSU's BEACON have been studying hyenas in Kenya for more than 20 years. Image credit: Michigan State University.

“Our results highlight the importance of choosing appropriate measures when estimating animal body size,” Swanson said. “They also suggest researchers should take caution in interpreting selection on size-related traits as selection on size itself.”

Spotted hyenas are particularly interesting because females are larger than males, which is extremely unusual among mammals. In most mammals, the size difference is easy to explain. Larger males get more food and attract more females, but females are faced with a tradeoff between their own body size and the energy needed for pregnancy and lactation. As of yet, the size difference between the sexes is still unsolved.

However, researchers have been able to shed light on the reasons for the large females’ success. They found that larger females reproduce more often and live longer after beginning to reproduce, when compared to smaller females.

Estimating fitness — or success at surviving and reproducing — can be difficult with spotted hyenas, which can live at least 19 years in the wild. Since Holekamp’s field study of spotted hyenas has been ongoing for more than 20 years, the researchers were able to count the number of surviving offspring produced by a female in her lifetime, as well as the length of her total reproductive lifespan.