Why, and when, do we learn to speak the way that we do? Research from North Carolina State University on African-American children presents an unexpected finding: language use can go on a roller-coaster ride during childhood as kids adopt and abandon vernacular language patterns.

“We found that there is a ‘roller-coaster effect,’ featuring an ebb and flow in a child’s use of vernacular English over the course of his or her language development,” says Dr. Walt Wolfram, William C. Friday Distinguished University Professor of English Linguistics at NC State and co-author of several recent papers describing the research. “This was totally unanticipated.” Vernacular English is defined here as culturally specific speech patterns that are distinct from standard English; in this case, the vernacular is African-American English (AAE).

One implication of the finding involves education, since teachers often advocate teaching standard English early in a childhood education. “This approach does seem to work at first,” Wolfram says, “but it doesn’t last.” In other words, if a school system wants its students to graduate high school with a strong foundation in standard English, it may have to revisit standard English later in the education curriculum. 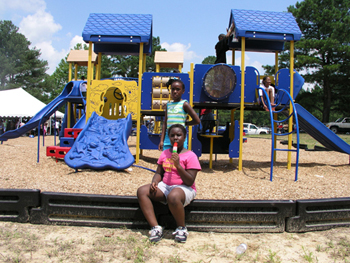 Researchers found that there is a "roller-coaster effect," featuring an ebb and flow in a child’s use of vernacular English over the course of his or her language development. Image credit: North Carolina State University

Specifically, the researchers found that children come to school speaking English with a relatively high number of vernacular features. Then, through the first four grades of elementary school, those features are reduced, as children adopt more standard English language patterns. As the children move toward middle school, the level of vernacular rises – though many children often reduce their use of vernacular again as they enter high school.

“This finding reveals a cyclic pattern in the use of African-American vernacular English that no one expected to see during children’s language development,” says Janneke Van Hofwegen, a research associate at NC State and co-author of the study. “This wasn’t even a hypothesis when we began the study.”

The researchers note that, while their data looked solely at African-American children, the findings may be applicable more broadly to other groups.

The research stems from the longest, and largest, study ever to examine the longitudinal development of language in African-American children. The study began in 1990, following 88 African-American children from central North Carolina in order to track their language development. The study is ongoing, with 68 of the original participants still being tracked. The data is collected by the Frank Porter Graham Child Development Institute in Chapel Hill, N. C.

The retention rate of the participants is remarkably high, particularly given that approximately 71 percent of the children were living below the poverty line in 1990. “It’s incredible, and gives us a rare opportunity to study language development in children,” Wolfram says.

The study also gives researchers an impressive array of data, providing them with access to school and test data, as well as the data collected through the study’s own interviews and surveys.

Researchers are currently assessing how and whether dialect use is related to literacy skills, as well as the role that mothers play in their children’s use of vernacular.

One of the papers, “Trajectories of Development in AAE: The First 17 Years,” is forthcoming from the Proceedings of the Conference on African American Language In Popular Culture. The paper was co-authored by Wolfram; Van Hofwegen; Mary E. Kohn, a Ph.D. student at the University of North Carolina at Chapel Hill; and Dr. Jennifer Renn, who worked on the paper while a Ph.D. student at UNC-Chapel Hill. The research was funded by the National Science Foundation.

Another paper, “Coming of age in African American English: A longitudinal study,” was co-authored by Wolfram and Van Hofwegen and was published in September 2010 in the Journal of Sociolinguistics.

NC State’s Department of English is part of the university’s College of Humanities and Social Sciences.