The first whole genome analysis of an octopus reveals unique features that likely played a role in the evolution of traits such as large complex nervous systems and adaptive camouflage. An international team of scientists sequenced the genome of the California two-spot octopus—the first cephalopod ever to be fully sequenced—and mapped gene expression profiles in 12 different tissues. The findings are published online Aug. 12 in Nature.

The researchers discovered striking differences from other invertebrates, including widespread genomic rearrangements and a dramatic expansion of a family of genes involved in neuronal development that was once thought to be unique to vertebrates. Hundreds of octopus-specific genes were identified, with many highly expressed in structures such as the brain, skin and suckers. 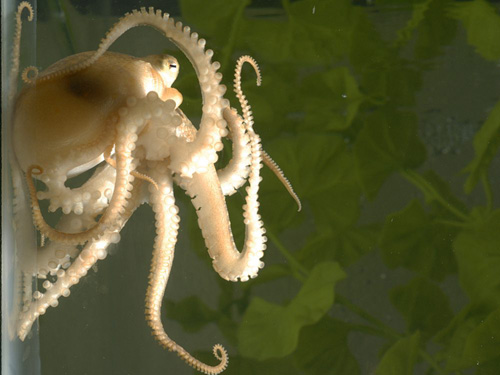 Assoc. Prof. Clifton Ragsdale and an international team of scientists sequenced the genome of the California two-spot octopus, or Octopus bimaculoides—the first cephalopod ever to be fully sequenced. Photo by Michael LaBarbera

The results serve as an important foundation for evolutionary studies and deeper investigations into the genetic and molecular mechanisms that underlie cephalopod-specific traits. The work was conducted by teams from the University of Chicago, University of California, Berkeley and Okinawa Institute of Science and Technology as part of the Cephalopod Sequencing Consortium.

“The octopus appears to be utterly different from all other animals, even other molluscs, with its eight prehensile arms, its large brain and its clever problem-solving capabilities,” said co-senior author Clifton Ragsdale, associate professor in Neurobiology and Organismal Biology and Anatomy at the University of Chicago. “The late British zoologist Martin Wells said the octopus is an alien. In this sense, then, our paper describes the first sequenced genome from an alien.”

Octopuses, along with squids, cuttlefish and nautiluses, are cephalopods—a class of predatory molluscs with an evolutionary history spanning more than 500 million years (long before plants moved onto land). Inhabiting every ocean at almost every depth, they possess unique adaptations such as prehensile arms lined with chemosensory suckers, the ability to regenerate complex limbs, vertebrate-like eyes and a sophisticated camouflage system. With large, highly developed brains, cephalopods are the most intelligent invertebrate and have demonstrated elaborate problem-solving and learning behaviors. 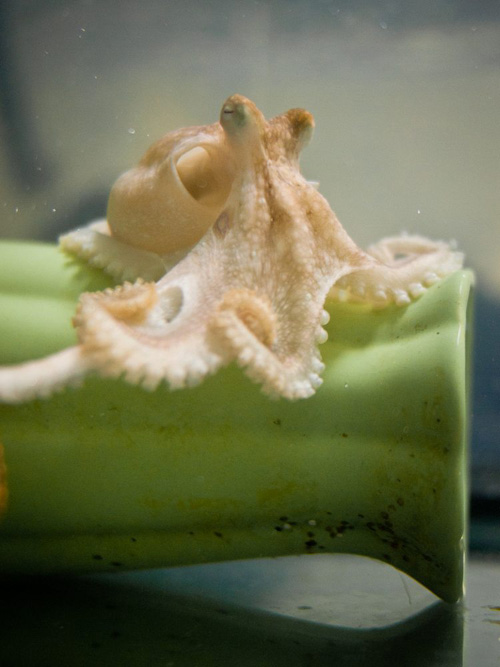 To study the genetics of these specialized traits, Ragsdale and his colleagues sequenced the genome of the California two-spot octopus, Octopus bimaculoides, to a high level of coverage—on average, each base pair was sequenced 60 times. To annotate the genome, the team generated transcriptome sequence data—which can be used to measure gene expression based on RNA levels—in 12 different tissues types.

The team estimates the O. bimaculoides genome is 2.7 billion base-pairs in size, with numerous long stretches of repeated sequences. They identified more than 33,000 protein-coding genes, placing the octopus genome at slightly smaller in size, but with more genes, than a human genome. 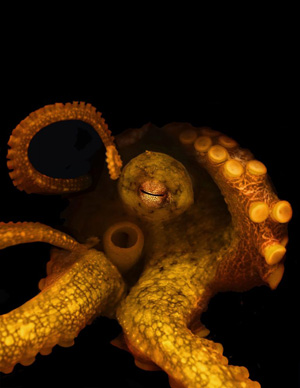 The genome size of the O. bimaculoides, 2.7 billion base-pairs, originally attributed to a duplication in the genome, was found to be partially the result of a massive expansion in a few gene families, notably in those that regulate neuronal development and in those involved in camouflage, suckers and neural tissue. Photo by Judit Pungor

The large size of the octopus genome was initially attributed to whole genome duplication events during evolution, which can lead to increased genomic diversity and complexity. This phenomenon has occurred twice in ancestral vertebrates, for example. However, Ragsdale and his colleagues found no evidence of duplications.

Instead, the evolution of the octopus genome was likely driven by the expansion of a few specific gene families, widespread genome shuffling and the appearance of novel genes.

The most notable expansion was in the protocadherins, a family of genes that regulate neuronal development and short-range interactions between neurons. The octopus genome contains 168 protocadherin genes—10 times more than other invertebrates and more than twice as many as mammals. It was previously thought that only vertebrates possessed numerous and diverse protocadherin genes. The research team hypothesized that because cephalopod neurons lack myelin and function poorly over long distances, protocadherins were central to the evolution of a nervous system whose complexity depends on short-range interactions.

Other gene families that were dramatically expanded in the octopus include zinc finger transcription factors, which are mainly expressed in embryonic and nervous tissues and are thought to play roles in development. The octopus genome contains around 1,800 C2H2 zinc finger transcription factors, the second largest gene family so far discovered in animals. Olfactory receptor genes in elephants are the largest at around 2,000.

Overall, however, gene family sizes in octopuses are largely similar to those found in other invertebrates.

A unique feature of the octopus genome appears to be widespread genomic rearrangements. In most species, specific cohorts of genes tend to be close together on the chromosome. However, most octopus genes show no such connections. Hox genes, for example, control body plan development and cluster together in almost all animals. Octopus Hox genes are scattered throughout the genome with no apparent linkages.

The octopus genome is enriched in transposons, also known as “jumping genes,” which can rearrange themselves on the genome. While their role in octopuses is unclear, the team found elevated transposon expression in neural tissues. Transposons are known to affect the regulation of gene expression and play major roles in shaping genome structure.

“With a few notable exceptions, the octopus basically has a normal invertebrate genome that’s just been completely rearranged, like it’s been put into a blender and mixed,” said Caroline Albertin, co-lead author and graduate student in Organismal Biology and Anatomy at the University of Chicago. “This leads to genes being placed in new genomic environments with different regulatory elements, and was a completely unexpected finding.”

The researchers also found evidence of extensive RNA editing, which allows the octopus to alter protein sequences without changing underlying DNA code. Many edited proteins are found in neural tissues, and these proteins are thought to act as a switch to regulate functions such as neural activity.

Hundreds of octopus-specific genes were identified, large numbers of which were found in the nervous system, retina and suckers. The team noted several specific gene families of interest. The suckers, for example, express a set of genes that resemble receptors for the neurotransmitter acetylcholine. However, the proteins these genes code for lack the ability to bind acetylcholine, and are suspected to function as chemosensory receptors involved in the octopus’s ability to taste with their suckers.

Six octopus-specific reflectins, genes involved in light manipulation and camouflage, were identified. Octopus reflectins are relatively dissimilar to reflectins in other cephalopods, suggesting that a single gene was present in a cephalopod ancestor, which then duplicated and evolved independently in different species. This is consistent with the team’s estimates that the octopus and squid lineages diverged around 270 million years ago.

Albertin and Ragsdale are now studying the molecular and genetic mechanisms responsible for the development of the octopus, particularly its brain. Efforts to sequence the genomes of other cephalopods are currently underway through the Cephalopod Sequencing Consortium.

“The octopus genome makes studies of cephalopod traits much more tractable, and now represents an important point on the tree of life for comparative evolutionary studies,” Ragsdale said. “It is an incredible resource that opens up new questions that could not have been asked before about these remarkable animals.”