Kicking the habit among mentally ill

The study was recently published in the Journal of the American Medical Association.

Even though smoking has declined by 55 percent among U.S. adults since 1965, tobacco use among those with mental illnesses such as schizophrenia and bipolar disorder has risen. Six million of the 11.4 million adults afflicted with mental disorders smoke cigarettes – about twice that of adults without mental illnesses. 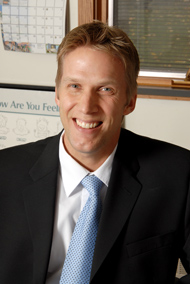 Eric Achtyes is the director of the Division of Psychiatry and Behavioral Medicine in MSU’s College of Human Medicine. Image credit: Michigan State University

“Certainly society has come a long way toward recognizing this deadly link, but there’s still more work to do, particularly in the chronically mentally ill where smoking rates remain as high as 60 to 90 percent,” said Achtyes who serves as the director of MSU’s Division of Psychiatry and Behavioral Medicine. “In those with serious mental illness, smoking appears to behave more like a chronic condition and long-term drug therapy may be needed to help them maintain abstinence once it is achieved.”

The study followed 247 smokers with schizophrenia or bipolar disease who participated in a 12-week smoking cessation program using varenicline and behavioral therapy. Of those participants, 87 patients quit and were then followed for another 40 weeks. During this time, all 87 participants continued to receive cognitive behavioral therapy, but one group remained on varenicline while another group received a placebo.

Results showed 60 percent of the varenicline users stayed non-smokers, compared to only 19 percent in the placebo group.

Additionally, researchers followed up with both groups 24 weeks later and found abstinence rates continued to be higher among varenicline users with a 30 percent non-smoking rate compared to 11 percent among placebo users.

The study was led by A. Eden Evins, director of the Center for Addiction Medicine at Massachusetts General Hospital and associate professor of psychiatry at Harvard Medical School, and assisted by colleagues including Achtyes.