However, since most cell-based assays rely on population-averaged measurements, the ability to tease out important findings and draw accurate conclusions can often be compromised due to cell population heterogeneity.

“The ability to generate a more homogeneous cell population, at least with respect to a chosen trait, could significantly aid basic biological research and development of high-throughput assays,” says John Slater, assistant professor of biomedical engineering at the University of Delaware.

Now, Slater and a team of researchers from Duke University, Baylor College of Medicine and Rice University have developed an image-based, cell-derived patterning strategy that produces arrays of homogeneous cells with anatomical properties that mimic the cells from which the patterns were derived. 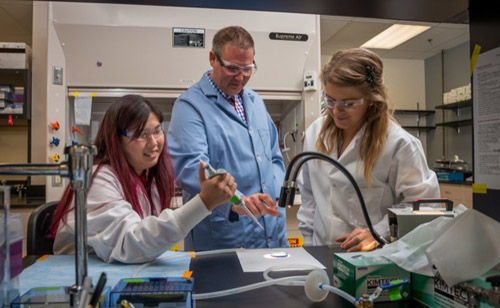 UD’s John Slater (center) is part of a team that has developed an image-based, biomimetic patterning strategy that produces a more homogeneous cell population for high-throughput cellular assays. Photo by Kathy F. Atkinson

The work is reported in a paper, “Recapitulation and Modulation of the Cellular Architecture of a User-Chosen Cell of Interest Using Cell-Derived, Biomimetic Patterning,” published in ACSNano.

An important feature of the technique is that it could provide a means to decouple the influences of several factors on mechanotransduction-mediated processes, a term that refers to the many mechanisms by which cells convert mechanical stimuli into biochemical activity.

These factors include cytoskeletal structure, adhesion dynamics and intracellular tension, which combine to govern signaling functions within cells and ultimately cell fate.

In addition, it could allow for direct recapitulation of the tension state of a user-chosen cell in a large population of patterned cells.

He sees the new tool as potentially synergistic with an existing technique known as FACS (fluorescence-activated cell sorting), which is often employed prior to experimentation to minimize the problem of heterogeneity.

Slater explains that with FACS, homogenous cell populations are generated based on the presence of specific cell surface markers.

In contrast, with the new technique, a cell of interest can be chosen based on simple image analysis of protein expression, and a pattern configuration can be derived to produce a phenotype similar to the cell of interest in a large population of patterned cells.

This could drive a chosen cell phenotype through mechanotransduction and also help maintain phenotypes that have already been selected for via FACS.

“Such a tool could prove extremely useful in investigating the influence of subtle local environmental changes on cell behavior, for example, stem cell differentiation, particularly when moving to high-throughput assay platforms and single-cell analyses,” Slater says.