Katie Stone Perez: Getting everyone in the game

Katie Stone Perez brims over with excitement when talking about Xbox games. All Xbox games. Today the senior program manager for Microsoft’s independent developer program, ID@Xbox, is particularly enthused about “The Hole Story,” a new game about a budding young archaeologist named Wendy who digs in her backyard and discovers a portal to a strange land.

The game, written and prototyped by a group of high school students, was selected from the Girls Make Games summer camp competition and will soon publish through ID@Xbox, which “enables qualified game developers of all sizes to unleash their creativity” though Xbox One and Windows 10.

“Just a few years ago, it wouldn’t have been possible for high school students to publish a game like this to Xbox,” marveled Perez.

Perez and ID@Xbox are working to create a truly democratic, equal opportunity platform where age, location and industry connections are no longer hurdles to publishing quality games.

“There are seats at the table for everyone,” she said. “And gaming will only achieve its full potential if it has a true diversity of game content and a diversity of game creators.” For Perez, gaming is the ideal platform to influence youth to fortify these inclusive social norms for the future. 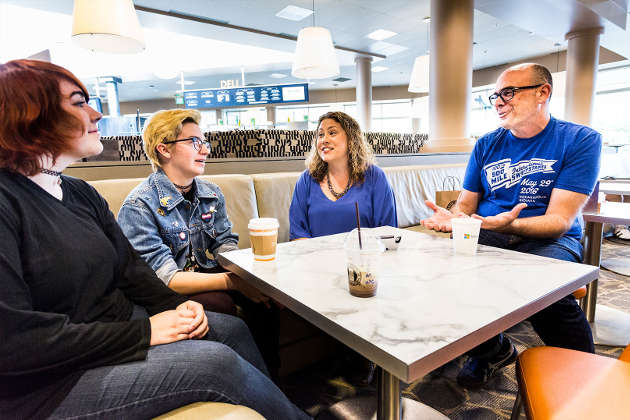 Perez embodies a rare balance of corporate savvy and idealism. She radiates sunny optimism but is just as comfortable delivering cutting business insights or managing teams of engineers.

“We’re starting to see more and more games that speak to different populations, to tell their stories and show their heroes,” she said. “And with so many kids spending their time in this medium, this is where we need to start if we want to create a more inclusive world.”

As a kid herself in Huntington Beach, California, Perez started playing “Mario Bros,” “Duck Hunt” and “Track & Field” with her younger brother, Jeff. Due to challenges in the family, Perez became Jeff’s legal guardian when she was 22 and he was 15. Much of their bonding continued around gaming.

With this early introduction to parenting, Perez decided to major in child psychology at the University of Washington. Although she didn’t plan to work in the tech industry, her psychology testing skills led her to a job evaluating family games for a mysterious new product at Microsoft that would come to be known as Xbox.

Early on, a manager told Perez that she didn’t have to be like everyone else, that her unique background and perspective would be important to help Xbox grow. She still credits that conversation with putting her on a trajectory of success at the company.

And success she had. Now armed with deeper tech skills, Perez built Xbox Live Arcade (XBLA), which brought digital distribution of games to the console for the first time and opened the doors for more casual content to find a home on Xbox. She not only drove the process and created the UI, but she produced all of the games in the initial line-up and worked to ensure that this new wave of console developers understood how to be successful on the platform. 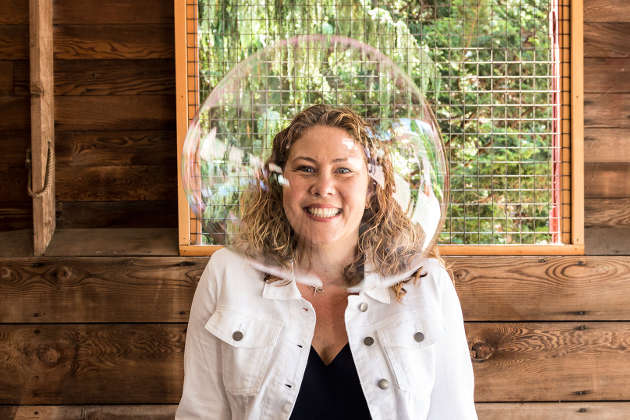 Perez’s daughter blew this prodigious and perfectly-timed bubble while her mother sat for photos. Photo by Brian Smale / © Microsoft

Perez regards that period as one of the most magical times in her career.

Perez continued to climb the ranks of Microsoft as an executive producer on the Xbox Live Team and then at Xbox Incubation, where she worked on Xbox One and was central to the creation of flagship products like HoloLens and Kinect. Perez was at the top of her game, even as her family increased by two daughters.

Then, her brother Jeff, while in his first year of graduate school, was diagnosed with kidney cancer.

He was given six weeks to live. Perez had always been family focused, but now family became everything. She was home for dinner every night. She stopped working on weekends. They had dance parties in the kitchen as frequently as possible. She knew that she and her family had to savor every moment with her brother.

Before Jeff passed away, some two years after his diagnosis, he was relegated to full-time bed rest. But he still managed to have fun through games.

“I reconnected with the sheer possibility of games,” she said. “I also remembered that you have to live like you mean it and realize your passions.”

She decided to re-dedicate herself to bringing new and unique independent content into gaming, like in her days at XBLA. Just as that first manager had given Perez the confidence to play a role in diversifying gaming, she wanted to create access and opportunity for others inside and outside of Xbox.

Chris Charla had just started ID@Xbox and Perez came on board to support the independent developers, build out the program and help ensure that this expanded developer audience would be successful on the platform.

“I approach it all as a ‘win-win’ with independent developers,” she said. “And it’s not just me: everyone on our team is really passionate about seeing the devs achieve success on Xbox.”

Unlike Xbox Live Arcade, anyone can apply through ID@Xbox’s online application.

“Of course, there’s a quality bar,” she noted. “But there is no resume or required pedigree. It’s a completely democratic system open to the whole world and no console has ever done that before.”

The ID@Xbox program also approaches its showcase events with inclusiveness. All developers with approved games are invited to submit a video asking to have their game shown at ID@Xbox’s loft event at the Games Developer Conference (GDC) and the pre-PAX West get-together.

“It’s a huge time investment to watch all of the videos and play all of the builds, but it inspires us and puts new devs on our radar,” she said.

The action-adventure survival game ARK came through this process and proved to be a huge success. Others upended expectations like “I, Hope,” which is about battling cancer and aims to help “young patients take their mind off long hospital stays and difficult treatments.”

Fresh voices are critical to maintaining a healthy and robust gaming platform. “If only the same creators are making content and telling narratives, then we are repeatedly speaking to same audiences,” Perez said. “Finding new voices is how we expand our audience and consumer base. Having the broadest and most diverse set of creators and content will give us the broadest and most diverse audience.”

She recognizes that after years of doing this kind of work, there is now a focus on diversity and inclusion at Microsoft. “The wind is now in our sails and everyone gets it,” she said. “And while there have always been a few game successes that were different from the norm, the new generation out there increasingly expects that diversity of us.”

Perez recently hosted a job shadow for several of the young developers of “The Hole Story” and reached out to Team Xbox to host the teens. Every studio that Perez contacted wanted to host the students. “People in the broader industry are seeing that gaming is for everyone. And to do that, we have to talk the talk and walk the walk.”

She believes that this sense of inclusion is best taught during childhood. Through games and within her own family, Perez believes it paramount to raise children who are considerate to people different from themselves.

“I didn’t intend to stay at Xbox for my whole career,” she said. “I was going to get my PhD in child psychology, but we have a major platform here at Xbox. Kids listen when I talk about games. I get to scratch that itch and hopefully influence them in positive ways.”

Not every game needs to have a deeper purpose. But games have sway on society and youth culture. “We need to change the norms that have excluded many and re-normalize society for empathy and empowerment,” she said.

And Perez sees the results every day. When her daughter was having trouble learning to ride her bike, she put a Mario toy into the front basket and said, “Mario taught me never to give up, no matter what.”