*In the first extensive genetic survey of microbes living in Kartchner Caverns, UA doctoral candidate Marian Ortiz has shown that some of the cave-dwelling microbes may have anti-microbial and anti-fungal properties.*

In a hole in the ground, there lives a microbe. Actually, there live several microbes. What are they and how do they survive in conditions practically devoid of resources or other forms of life?

Doctoral candidate Marian Ortiz in the University of Arizona’s department of soil, water and environmental science is trying to find out.

Her study site is Kartchner Caverns, designated a National Science Foundation Microbial Observatory in 2006. Ortiz’s findings indicate that some of the cave-dwelling microbes could produce compounds with antimicrobial and antifungal properties. If so, the microbes could be a valuable resource for substances to help fight new diseases and pests.

“I think one of the reasons that Kartchner is so unique is that the park rangers are so interested in learning about and protecting the caves,” said Ortiz. “That makes it a great place to study. It’s a living laboratory.” 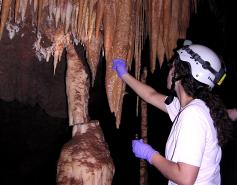 Doctoral candidate Marian Ortiz in the UA's department of soil, water and environmental science samples microbes that live on the surface of stalactites and other mineral deposits in Kartchner Caverns. Photo courtesy of Ginger Nolan/Kartchner Caverns State Park

Kept secret for 14 years after its discovery in 1974 by two UA graduate students who were hiking in the Whetstone Mountains in Southern Arizona, Kartchner Caverns has been protected from human impact so that scientists can study the fragile environment and organisms inside the cave.

“The main objective is to explore and study the microbial communities in the cave,” said Ortiz. “My research is focused specifically on the bacterial communities.”

Ortiz is studying colonies of microbes that sometimes make their homes on speleothems, cave formations that develop over thousands of years as water trickles through and leaves minerals behind. Speleothems commonly take the forms of stalactites hanging down from cave ceilings, stalagmites sticking up from cave floors and columns that stretch from the ceiling to the floor.

On the surfaces of the speleothems dwell thousands of species of microbes, invisible to the human eye. These microbes survive in an environment devoid of sunlight for photosynthesis and mostly uninhabited by plants, animals or organic matter, the usual sources of energy for microbial life. The only resources for these microbes are the minerals they dwell upon, the water that trickles through the cave and chemical energy they generate themselves.

“Some of them have a different metabolism, a different way of getting their energy,” said Ortiz. “They have to get their energy from chemical sources. We are very interested to learn the nature of those processes.”

Ortiz also is studying how environmental conditions can influence microbial diversity. For example, the mineral composition on one speleothem may be ideal for one species but not for another. “Each speleothem has a unique microbial composition,” said Ortiz.

“Another study goal of the microbial observatory is to see how humans are influencing the cave system,” said Ortiz. Even the wave of a human hand over a rock can leave behind debris such as skin cells and cloth fibers, which can alter the bacterial community from the natural state, favoring the development of other microbes that can use those materials. 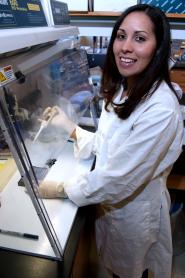 Through genetic analysis of cave-dwelling microbes from Kartchner Caverns, Marian Ortiz has found that some of the microbes may produce compounds that have anti-microbial and anti-fungal properties. Photo by Patrick McArdle/UANews

Extensive precautions are taken at Kartchner Caverns to minimize human impact. Visitors are allowed into only certain areas and must enter and exit through sealing doors that maintain the temperature and humidity inside the cave.

With aid from state park employees, Ortiz collected her samples from undisturbed speleothem formations in the caverns. She sampled the microbial colonies with sterile cotton swabs, which then were placed into individual tubes filled with sterile water and returned to the lab.

“We remove the swabs and then we extract the DNA from the water,” said Ortiz. “We have all the genes of many different types of bacteria. But we are interested in one gene that is called the 16SrRNA gene. This gene is commonly used for classification because it is found in all bacteria but it also has certain regions that vary between bacteria and are specific for certain groups.”

The gene is isolated from the DNA fragments and amplified to produce copies in a process called Polymerase Chain Reaction, or PCR. The amplified fragments then are sequenced using 454 pyrosequencing. Unlike traditional methods that produce only hundreds of gene sequences, pyrosequencing is capable of producing up to a million gene sequences.

“This is the first time that pyrosequencing has been done on DNA from microbes in caves,” said Ortiz. The more gene sequences the researchers have, the more information will be obtained to identify individual species of bacteria based on their unique genetic structure.

Ortiz groups the gene strands by similarity of the pattern of repeating base pairs. This way she catches strands that come from the same or similar types of bacteria, which makes classification of the microbial species easier. Ortiz identifies species by comparing the gene sequences with gene sequence databases for microbes that previously have been identified and studied by other labs. Sometimes she finds no match – a possible never-before-seen species.

The second phase of her study is a metagenomic sequencing analysis. Genes from multiple organisms are sequenced and the functions of many genes are identified or can be inferred based on the similarity of the gene to others whose functions are known.

“Now we are looking at everything, not just the 16SrRNA gene. From there we can get an idea of the functions,” Ortiz said. This part of her study is limited by the extent of the database. “We can identify new genes but we don’t know their function.”

Based on the presumed functions of the genes that make up the microbes’ genomes, some species potentially could produce anti-microbial and anti-fungal compounds. In addition, some groups may be able to degrade hydrocarbons, compounds present in oil and gas molecules, presenting the possibility that these microbes could be used for environmental remediation of oil or gas spills.

Just because an organism has a gene doesn’t mean that the gene is active. To know for sure whether bacteria perform certain functions, scientists would have to culture them and study their life cycles. The problem is that only about 1 percent of microbes on Earth can be grown in a lab. The environmental conditions needed for most to survive are too specific to reproduce.

But Kartchner Caverns serves as a laboratory filled with microbial life, the functions and possibilities of which we yet little understand. “Is there a way that we can use this knowledge to understand the potential for life on other planets?” said Ortiz. “Bacteria can survive anywhere.”

Funding for Ortiz’s research is from a National Science Foundation Microbial Observatory grant to Raina Maier in the UA’s department of soil, water and environmental science and from Arizona State Parks to study human impacts on the cave environment.