In 2009, while investigating a sudden influx of illnesses caused by food contamination, journalist Michael Moss learned that there was another, and arguably more severe, public health crisis at hand: the disproportionate use of salt, sugar, and fat in a variety of everyday foods.

Moreover, Moss said in his recent Poynter Lecture at Yale, he came to the frightening conclusion that this was not accidental on the food companies’ part, but intentional — that the these unhealthy ingredients were added to attract consumers and make them dependent on products.

He asserted that they target kids and teens because when a person chooses a brand at a young age, they tend to remain loyal to it. For this reason, food companies deliberately place their products in corner stores that surround schools, which Moss describes as “evocative of the crack epidemic in the 1980s” because dealers employed the same strategy to lure youngsters.

Moss, who works for The New York Times, spoke before a full audience at the Connecticut Mental Health Center. His visit came on the heels of his newly published book titled “Salt Sugar Fat: How the Food Giants Hooked Us.” 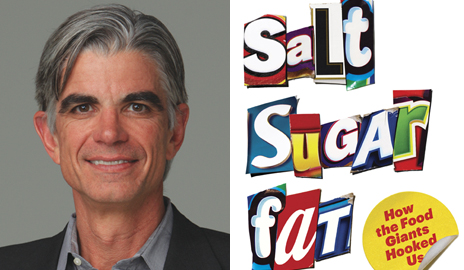 Michael Moss, with the cover of his new book. (Moss photo by Tony Cenicola, The New York Times)

Moss ascertained that in an effort to engineer the most appealing products possible, food companies extensively studied the ideal ratio of these ingredients to reach the highest level of food optimization, known in the industry as the “Bliss Point.” The industry has experienced a boom in sales since developing this model of convenient, low-cost, and tasty foods, he said.

The journalist noted that the inclusion of salt, sugar, and fat — once an expected presence in stereotypical junk food — is now in every kind of processed food throughout the grocery store. By doing this, Moss commented, the food companies “are exploiting the biology of the child whose taste buds are hard-wired for sugar.”

“These companies are not evil,” he stated. “It is not an issue with a single product or company, but their collective zeal to sell as much as possible.”

Moss said he believes that the government has a close partnership with the food industry, adding that food companies might even have more power than government arms, such as the U.S. Department of Agriculture, that are tasked with regulating them.

During his investigations, Moss said that he also discovered that the food industry employs ingenious marketing techniques. He remarked on how the language it employs, for example, also has influence: Companies use “snackability” and “cravability” as opposed to “addiction,” and refer to salt as “flavor burst” and to fat as “mouth feel,” he revealed.

Other techniques applied by these companies include modifying the shape, texture, and scent associated with foods, he maintained. For example, Moss described Cheetos as the epitome of a food with perfect texture because it was developed to give the sense that it melts in one’s mouth. The sensation of having the food dissolve tricks the eater’s brain into registering the experience as if calories are disappearing — something the companies refer to as “vanishing caloric density,” said Moss.

Moss also discussed the obesity crisis in America, and said that the cost of this crisis is an estimated $300 billion in medical charges and reduced productivity. He added that the crisis leaves “anything but a level playing field, especially for vulnerable people.”

In the future, Moss told the audience, he hopes to continue to emphasize the importance of education on the “food we hate to love.” His main goal is to disseminate information so that it’s more accessible, allowing people to feel inspired and practice making educated food choices based on facts.

“Knowledge is empowering,” he declared, adding that his book was written with that very intention. “Once you know the tricks of these companies and learn to look behind the labels, you will feel an incredible sense of power.”

This discussion was sponsored by the Poynter Fellowship in Journalism.