The Surveys, conducted by the U-M Institute for Social Research, have been monitoring consumer attitudes and expectations for over 60 years. 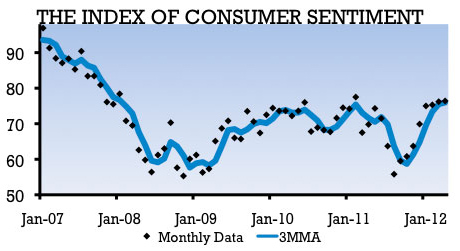 “The revival of confidence critically depends on the two economic events that consumers still expect to happen—that jobs will become more plentiful and that gasoline prices will continue to edge downward,” said Curtin. “Both are widely expected by consumers, and these expectations are anchored well enough to withstand temporary disappointments. But without renewed gains in jobs and incomes, economic optimism will remain at lackluster levels.” 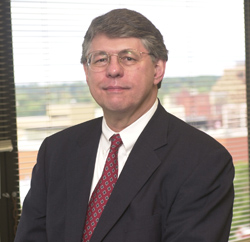 The current financial situation among all income groups weakened in April. Just one in four households anticipated an improved financial situation during the year ahead, a figure that has remained largely unchanged since the start of 2012. This dismal outlook was due to the absence of anticipated income increases in the year ahead, expected by the majority for an unprecedented 40 consecutive months. Even a lower expected inflation rate still meant that the majority of households expected declining inflation-adjusted incomes during the year ahead.

The rapid growth in consumers’ awareness of job gains ended in April. Importantly, when specifically asked about what changes they anticipated in the unemployment rate, consumers were somewhat less likely to expect further declines. Nonetheless, overall references to employment conditions remained positive enough to support an improved outlook for the economy in the year ahead and the best five-year outlook since mid-2007.

The Sentiment Index was 76.4 in the April 2012 survey, barely above the 76.2 in March but significantly above last April’s 69.8. Consumers’ assessments of current economic conditions and their expectations for future economic prospects moved in opposite directions by the same proportion compared with a month earlier. Compared with a year ago, however, the Expectations Index posted a large gain (+17.4 percent), while the Current Conditions Index scarcely improved (+0.5 percent).

“The main challenges to building a lasting economic recovery are renewing job and income growth as well as reducing uncertainty about future federal tax and spending policies,” said Curtin. “To avoid the mid-year relapses of the prior two years, it would be best to quickly reduce uncertainty about future tax rates which are now scheduled to increase at the start of 2013.

“If no decision about bridging the fiscal cliff is made until after the November election, consumers are likely to become more cautious spenders, especially higher income households toward year end, and those delayed spending decisions will become more widespread the closer the election.”