Joanna Radin on the ‘phenomenon’ of biobanking

When HIV/AIDS became a pandemic, epidemiologists wanted to know where it began. In the 1980s, they found their answer in a freezer filled with blood. This blood had been collected in the 1950s from members of indigenous communities in Africa as part of anthropological research on human variation. To this day, that sample is the oldest trace of HIV known to biomedicine. It is what launched Joanna Radin’s interest in the field of biobanking, a means of preserving blood and other tissues for future research. It is also what led her to write her recently published book, “Life on Ice: A History of New Uses for Cold Blood.” 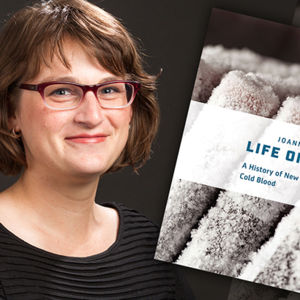 Radin, who is assistant professor in the history of medicine at Yale where she also has appointments in anthropology, history, American studies and the Program in Ethnicity, Race, and Migration, wanted to know how freezing came to be an important and routine element of biomedical research and why, during the Cold War, scientists’ were motivated to travel far and wide to collect and freeze blood samples from indigenous communities around the world. “They were invested in the idea that this blood could be used to answer questions science had not yet figured out how to ask. The freezer was supposed to serve as a biological time capsule to be opened when science had produced new ways of knowing, like the ability to sequence DNA,” Radin says.

“When we think about freezing we tend to think about complete, crystalline stillness,” notes Radin, who was surprised at how “lively” freezing can be “in its ability to reorient life in time and creating new possibilities for making knowledge and for reimagining relationships to each other and our non-human kin.”

YaleNews recently spoke with Radin about the “secrets” that can be revealed from biobanking, the “fascinating” history of the technology, and how she uses science fiction in her courses so her students can imagine what the future of medicine may hold.

What follows is an edited version of that conversation.

What most surprised you about the history of cryobiology?

This is why I love history of science and medicine! Innovations are nearly always more complicated and are motivated by different forces than what we could possibly imagine. Beginning in the 1930s, a Catholic priest and biophysicist named Basile Luyet — who is considered to be the “father” of cryobiology — became interested in understanding the limits of life. He began by freezing different organisms in order to suspend animation. This Catholic priest didn’t set out to create a biobank, but his research agenda gained momentum after the Second World War, when there was a tremendous demand to improve access to blood for transfusions. Luyet was very entrepreneurial, and he followed the research wherever the possibilities for funding emerged — from his lab in Missouri, where he and a nun conducted experiments freezing and thawing life trying to understand if life could be stopped and started at will, to working with cattle breeders in Wisconsin on the standardization of cattle herds via frozen semen! Cattle breeders perfected cryopreservation in order to reduce biological variation in their herds and, soon after, anthropologists used that knowledge to preserve samples of human variation. The technology of cold storage itself took on a new use and meaning in the hands of a very different group of experts.

What is especially fascinating about is Luyet is that he never explicitly spoke about the religious dimensions of cryobiology, even as he helped to open up life itself to manipulation. Even his students were mystified by how he reconciled his Christianity with his efforts to extend life.

The fact that a Catholic priest played such an important role in developing a new realm of biotechnology scrambled my assumptions about the relationship between science and religion. That story was just completely fascinating to me, and allowed me to think differently about ethical issues surrounding the reuse of “life on ice.”

What are some of the ethical concerns that you discuss in your book?

One of these concerns is centered on the idea of informed consent. This powerful doctrine dates back to Nuremburg and to that very dark moment in the history of human experimentation. Scientists realized that they needed some way to ensure that they were not harming the people who participated in their research. However, when you are dealing with a specimen that is a piece of a person that has been frozen over a long period of time, it may wind up being used for purposes that even the people who collected it couldn’t have anticipated. When that happens, informed consent breaks down, and can no longer provide the kind of protection that those who agreed to participate expect from their relationships with researchers.

One of the insights that I gained from doing this work was finding that it wasn’t only research subjects who were dissatisfied with informed consent, many scientists and practitioners were as well. One of the challenges is how to make sure that research doesn’t cause harm, even in the future, even as we recognize that what science is about is change and transformation over time. There can never be completely informed consent because it’s not possible to predict the future. In the absence of shared values—such as those that a priest like Luyet could take for granted as a member of the scientific community and as a member of a mainstream Western faith—it becomes especially difficult to ensure common ethical ground.

The blood samples that I write about in this book come largely from members of indigenous communities whose views about the relationship between life and death challenge the assumptions of many scientists. A number of members of these communities have been at the vanguard of pushing biomedical researchers to rethink ethical protocols and decision-making. They feel that they have obligations to their ancestors and descendants to protect their body parts and not repeat some of the harms that have been done to these communities through various kinds of medical efforts in the past. Far from being anti-science, many of these indigenous leaders, are innovating new ways to work with scientists. One of the really interesting practices that has emerged has been the concept of “DNA on loan.” Instead of a scientist having total responsibility for what happens to a blood sample over time, when someone donates a blood sample, it is on loan for a specific period of time. This is done to ensure an enduring obligation between researchers and subjects that allows them to check in and revisit how the blood sample is being used.

One of the concepts that you examine in your book is this idea of latency, or concealed potential, that arises in biobanking. Why is this important?

Latency is a way of thinking about what might be happening even when it looks like nothing is happening. Our bodies carry all kinds of secrets and that is part of what is fascinating about being alive. Infectious conditions like HIV or TB is a perfect example of a potentially harmful form of latency because you can be infected but not experience any symptoms. Scientists working with frozen blood samples are counting on new technologies and to help them register information that might be concealed in a preserved sample. These are both examples of a kind of “present absence” — or the ways in which we don’t know when the future is going to arrive. Latency is a way of trying to account for that uneasy gap between the present that we live in and a future that we might want to imagine or that could be upended.

What are some of the most significant findings from blood samples saved from the past?

In addition to the case of HIV/AIDS, these blood samples have been used to discern the viral origins of Hepatitis B as well as to detect new life forms later identified as prions. Today, scientists are searching frozen blood for human DNA as well as non-human DNA. Several groups of researchers have found preserved malaria in human blood. This old malaria was collected before it would have developed drug-resistance, making it an important resource in the effort to control the deadly impacts of the illness. And, of course, nearly eradicated organisms like smallpox persist, with some degree of controversy, in freezers in the United States and Russia. Biobanking can create snapshots in time and is such a broad phenomenon that goes far beyond even what I could discuss in the book.

How do you incorporate your research on this topic into your classroom teaching?

I teach a large lecture class called “Historical Perspectives on Global Health” in which we talk about how the rise of biomedical science has shaped what comes to be seen as worthwhile investment in global health. The history of biobanking provides us with a material way to think about more abstract ideas of epidemiology, population health, and drug development.

In my undergraduate seminar “Biomedical Futures Since 1945,” we read forms of science fiction alongside scientific works, including those that play with the idea of “freezing time.” I’ve been struck by how often the students remark that the historical science literature is more unbelievable than the science fiction! This is a powerful lesson for the students. I want them to think about how the way we imagine the future shapes what kinds of innovations we bring into being. That’s an insight that really came out of working on these frozen blood samples and thinking about the way they invite people to imagine what future possibilities these specimens are going to serve.

In my medical school courses, I teach future doctors about the ways in which the innovations that they are going to develop in the future have histories — their instruments have histories, their cell cultures have histories — and knowing those histories is not just a matter of memorizing the names and the dates, it’s about using the knowledge of that history to formulate better research questions. History can be a resource for the future, it can even be a way of changing what kind of futures we want to create.