COLUMBUS, Ohio — Many consumers have found a way to cope with the knowledge that products they like have been made unethically: They simply forget they ever knew it.

In a series of studies, researchers found that consumers conveniently “forgot” that brands of desks were made with wood from rainforests or that jeans may have been made with child labor. 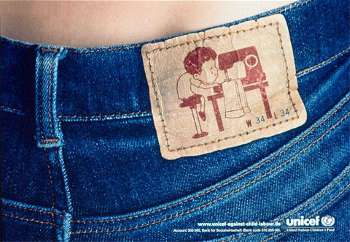 In fact, consumers not only forget the uncomfortable truth, but sometimes misremember the facts and believe that the offending product was made ethically.

“It’s not necessarily a conscious decision by consumers to forget what they don’t want to know,” said Rebecca Reczek, co-author of the study and associate professor of marketing at The Ohio State University’s Fisher College of Business.

“It is a learned coping mechanism to tune out uncomfortable information because it makes their lives easier.”

The study appears online in the Journal of Consumer Research and will be published in a future print edition.

In one study, 236 college students were asked to read and memorize descriptions of six made-up brands of desks. The descriptions discussed quality, price and an ethical dimension – the source of the wood. Participants read that the wood either came from sustainable tree farms or endangered rainforests.

When asked immediately after memorization, participants accurately recalled whether the wood came from rainforests or tree farms in 94 percent of the cases.

But those memories faded quickly. After the participants completed 15 to 20 minutes of tasks meant to distract them, they were then given a sheet of paper with all six desk brand names and were asked to write down as much as they could remember about each desk.

“It is not that the participants didn’t pay attention to where the wood came from. We know that they successfully memorized that information,” said study co-author Daniel Zane, a doctoral student in marketing at Ohio State.

“But they forget it in this systematic pattern. They remembered the quality and price attributes of the desks. It is only the ethical attributes that cause people to be willfully ignorant.”

Why is forgetting ethical information so popular with consumers? Well, another study suggested that it makes people feel a little better about themselves.

“So, for most people, forgetting is seen as the more acceptable coping strategy.”

If you really want to be an ethical consumer, there are steps you can take, Zane said.

“You need to realize that this memory bias exists and eliminate memory from your buying process,” he said.

“Don’t put something in your online shopping cart that you know was made unethically and say you’ll think about it. By the time you come back, there is a good chance you will have forgotten what troubled you in the first place.”

There’s a lesson for ethical companies too, Reczek said.

“Don’t make your customers rely on memory. Make sure you have reminders at the point of purchase that you’re an ethical brand,” she said.

Other co-authors were Julie Irwin, professor of business at the McCombs School of Business at the University of Texas at Austin; and Kristine Ehrich, lecturer of marketing at San Diego State University.