COLUMBUS, Ohio – English ivy’s natural glue might hold the key to new approaches to wound healing, stronger armor for the military and maybe even cosmetics with better staying power.

New research from The Ohio State University illuminates the tiny particles responsible for ivy’s ability to latch on so tight to trees and buildings that it can withstand hurricanes and tornadoes. (Not to mention infuriate those trying to rid their homes of the vigorous green climber.)

The researchers pinpointed the spherical particles within English ivy’s adhesive and identified the primary protein within them. 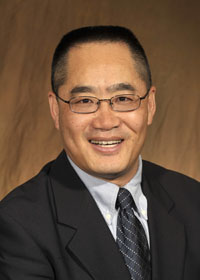 “By understanding the proteins that give rise to ivy’s strength, we can give rise to approaches to engineer new bio-inspired adhesives for medical and industry products,” said Mingjun Zhang, the biomedical engineering professor who led the work.

“It’s a milestone to resolve this mystery. We now know the secret of this adhesive and the underlying molecular mechanism,” said Zhang, who focuses his work on finding answers in nature for vexing problems in medicine.

“Ivy has these very tiny hairy structures that have a wonderful interaction with the surface as the plant climbs. One day I was looking at the ivy in the backyard and I was amazed at the force,” Zhang said.Like many scientists before him, Charles Darwin among them, Zhang found himself captivated by English ivy – the physics of it, the sheer strength of it. The study appears in the journal Proceedings of the National Academy of Sciences.

“It’s very difficult to tear down, even in a natural disaster. It’s one of the strongest adhesive forces in nature.”

When he and his team took a look at the ivy’s glue with a powerful atomic-force microscope, they were able to identify a previously unknown element in its adhesive.

Zhang said particles rich in those proteins have exceptional adhesive abilities – abilities that could be used to the advantage of many, from biomedical engineers to paint makers.The tiny particles inside the glue on their laboratory slides turned out to be primarily made up of arabinogalactan proteins. And when the scientists investigated further, they discovered that the driving force behind the curing of the glue was a calcium-mediated interaction between the proteins and pectin in the gelatinous liquid that oozes from ivy as it climbs.

Zhang, a member of Ohio State’s Davis Heart and Lung Research Institute, is particularly interested in bioadhesives that could aid in wound healing after injury or surgeries. Others, notably the U.S. military, are interested in surface-coating applications for purposes that include strengthening armor systems, he said.

Many plants are excellent climbers, but scientists have had limited information about the adhesives that enable those plants to affix themselves to walls, fences and just about anything in their way, he said.

“When climbing, ivy secretes these tiny nanoparticles which make initial surface contact. Due to their high uniformity and low viscosity, they can attach to large areas on various surfaces,” Zhang said.

After the water evaporates, a chemical bond forms, Zhang said.

The glue doesn’t just sit on the surface of the object that the ivy is clinging to, he said. It finds its way into openings invisible to the naked eye, further solidifying its bond.

To confirm what they found, Zhang and his collaborators used the nanoparticles to reconstruct a simple glue that mimics ivy adhesive. Advanced bioadhesives based on this research will take more time and research.

In addition to its strength, ivy adhesive has other properties that make it appealing to scientists looking for answers to engineering quandaries, Zhang said.

“Under moisture or high or low temperatures, it’s not easily damaged,” he said. “Ivy is very resistant to various environmental conditions, which makes the adhesive a particularly interesting candidate for the development of armor coatings.”

Ivy also is considered a pest because it can be destructive to buildings and bridges. Knowing what’s at the heart of its sticking ability could help scientists unearth approaches to resist the plant, Zhang said.

The research was supported by the U.S. Army, the National Science Foundation and the U.S. Department of Energy.