Magnus Carlsen, reigning world chess champion, has his own mobile app. He hangs out with actress Liv Tyler. He’s done professional modeling and ads. A new documentary film, “Magnus,” shares the story of the 25-year-old often described as “the Mozart of chess.”

Carlsen’s brains, charisma and electric smile have helped catapult him to superstar status not only in his home country of Norway, but around the globe. And much of the world is watching now as Carlsen battles Sergey Karjakin of Russia at the World Chess Championship in New York City. The 12-match series started Nov. 11 and continues until one of the players reach 6.5 points, or Nov. 30 if a tie-breaking match is needed.

Microsoft was Carlsen’s sponsor in 2004, when he was 13 years old. The support made it possible for Carlsen to travel, accompanied by his family, to competitions. Those events included playing then-world chess champ Garry Kasparov, who was 41, in Reykjavík, Iceland. It was a match that resulted in a draw.

Despite that heady experience, Carlsen then, and now, remains very “grounded,” says his manager Espen Agdestein. “He wants to bring chess to more people around the world, and is happy to be able to support popularizing the game. He thinks that chess can make the world a little smarter place.” 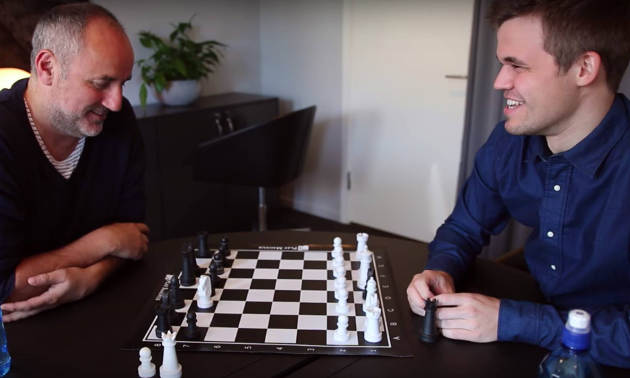 Carlsen is considered a highly intuitive player, and “his intuitive style conserves the mystique of chess at a time when every CPU-enhanced fan thinks the game is easy,” Kasparov wrote in Time magazine in 2013, when Carlsen was included in Time’s list of the 100 most influential people in the world.

But Carlsen also relies on strategy to win. In the intensely competitive chess world, players plot their possible moves and strategies ahead of matches.

Carlsen, like other top chess players, has a team of people around the world to help him. They collaborate and communicate with Carlsen and his coach, and they use computers to pore over chess engines and databases to develop strategies to recommend.

“It is very important for me to have a simple and secure way to communicate, so I can focus on preparations,” Carlsen says.

While the number of people on Team Carlsen is secret, the amount of work involved is not.

It’s “tremendous,” says Agdestein — especially figuring out the opening moves of the game.

“Our biggest worry is that if our information is intercepted, all our strategies might fall apart, and this is where Microsoft helps keep us safe,” says Peter Heine Nielsen, Carlsen’s coach.

Vibeke Hansen, communications lead in Microsoft Norway, says Team Carlsen’s Azure access is “encrypted from end-to-end. Cloud services provides secure identification of both the people and the devices they use to gain access,” with team members securely using Skype, email and document sharing.

“At the same time, it is important that the technology supports the working methods already established by Team Carlsen,” Hansen says. “The team needs to communicate and collaborate easily and undisturbed from different parts of the world.”

Carlsen and his team members are also using Surface devices. Both the change to new devices and to a new way of collaboration made some team members uneasy initially, says Agdestein.

“They were used to having their own kind of way of handling things, and their own devices,” he says. “They didn’t believe that it was possible to implement a system that was user-friendly enough. That was the main skepticism.” All now agree the transition, he says, has worked “very well.”

Henrik Carlsen, Magnus’s father, who always travels with his son, taught him to play chess at age 5. Magnus was 7 when his interest in the game increased. The motivation was sibling rivalry, as he watched his older sister play chess with his father.

Certainly, there were signs early on that Carlsen was gifted. At age 2, he could solve 50-piece jigsaw puzzles, and at 4, he completed Lego constructions meant for 10- to 14-year-olds.

“He did have a good memory and the ability to concentrate for hours at the time on a specific topic … and he seemed to be interested in lots of new things all the time, but I thought that was normal,” Henrik Carlsen told Bob Simon of “60 Minutes” in an interview that aired in 2012.

Carlsen was 8 when he played in his first tournament. By age 13, he was named a “Grandmaster,” the highest honor a chess player can receive, and one that is given for life, by FIDE, the world chess organization. At the time, he was the youngest Grandmaster ever.

He has done modeling work with Tyler, who has appeared in Hollywood movies including “The Lord of the Rings” trilogy, and who Carlsen counts among his friends. He’s also appeared in ad campaigns for companies including Omega Watches and Porsche.

In 2013, he set up his own company, Play Magnus AS, which produced a mobile app called Play Magnus that lets users play a Magnus Carlsen-tuned chess engine that plays exactly like Carlsen did at different ages — starting at age 5. The chess engine was created using a database of thousands of Carlsen’s recorded games from the age of 10.

The documentary film about his life, “Magnus,” debuted last spring at the Tribeca Film Festival, and is being shown around the world.

It is humbling stuff for Carlsen, who is not hesitant to poke fun at himself. “Despite being a guy who remembers so much chess, Magnus is totally hopeless at remembering his own stuff when traveling,” he writes about himself on his Play Magnus website.

And while he is often described as the “Mozart of Chess,” it’s not something he’s entirely comfortable with. Was Mozart ever asked how he accomplished what he did? Carlsen asked interviewer Bob Simon on “60 Minutes.”

“I would be very impressed if he had a good answer to that,” Carlsen told Simon, “because I think what he would (have said) is that, ‘It just comes natural to me. It’s what I do.’”