Insight to the eye lens

If you want to take clear photographs, you don’t use sandpaper to clear a smudge from your camera’s lens. Similarly, if you want to see clearly, the lens of your eye has to be free of obstruction.

For that reason a curious thing happens during the development of eye lenses. Instead of closely guarding their nucleus and the DNA it contains – which normal cells do – most lens cells do the exact opposite. They actually degrade their own nuclei and other cell parts. If they were left in place, they would block clear vision causing cataracts at birth. Cataract disease, commonly found in the elderly, is a leading cause of blindness in the world.

Until now, scientists did not understand much about how these cells managed to do this – how they simultaneously pruned away obstructions without damaging proper development of the eye lens.

But now, in an article published in PLOS Genetics, University of Delaware biologist Salil Lachke and his collaborators show the protein (Celf1) is essential to this process and reveal the mechanism used in three different vertebrates – mice, frogs and zebrafish. 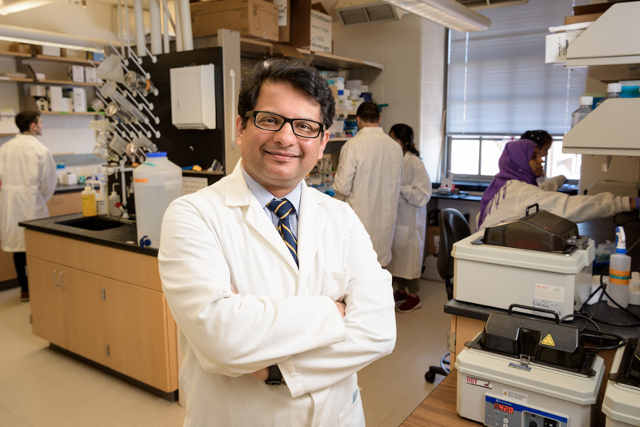 They also show the role this molecular machine plays in controlling factors that normally inhibit cell division, information that could have significant implications for cancer research.

The discoveries plant one of the earliest flags in a little-explored frontier of eye lens biology – showing how an RNA-binding protein found in fish, amphibians and mammals rewires components normally involved in cell division in order to control cell differentiation and specialization during lens development. They show that this RNA-binding protein is essential to breaking down the nucleus’ membrane and starting the process of digesting fiber cell DNA that would otherwise obstruct vision.

“Scientists and philosophers have long wondered at the beauty and complexity of the vertebrate eye,” Nobel Laureate Craig Mello wrote after reading Lachke’s article. “How has evolution assembled this amazingly complex organ? Dr. Salil Lachke at the University of Delaware has been systematically searching for answers to this question for many years.”

In this study, Mello said, Lachke “reveals how building the eye actually requires de-constructing the internal, opaque, structures inside the cells that form the lens, including destroying the DNA itself. In a collaborative study, Salil and co-workers identify an RNA-binding protein Celf1, that plays a role in eye development in fish, frogs and mice, and they identify key mRNAs regulated by Celf1.”

But how does a cell degrade its own nucleus and DNA without killing itself and defeating the goal of lens development? How does it know when to stop this degradation?

“Isn’t that sort of a counter-productive thing to do – destroying the one thing that keeps it alive?” Lachke said. “It’s almost like arrested cell death. In normal cell death, the body gets rid of the nuclei as well as the cell. But here, the lens wants to keep itself functional and does so by getting rid of the nuclei but still keeping the cells, which act as bags filled with ‘crystallin’ proteins that effectively refract light.

The RNA-binding protein Celf1 is the key to this process.

“The functions of RNA-binding proteins, especially in organ development, are not well understood, mainly because scientists have not looked at them as carefully yet,” Lachke said. “Most studies focus on signaling proteins and DNA-binding proteins that are important for initiating gene expression. But after you turn on a gene, you have to do a lot to precisely regulate its final output. In a process known as ‘post-transcriptional control,’ RNA-binding proteins determine the life span of their target RNA or whether that RNA should be translated into protein. Thus, it is essential to study RNA-binding proteins and the molecular processes they control after a gene is turned on.”

If you think of genes as lights that are turned on in a house, you could think of these proteins as the ones who go around making sure lights are kept on in the correct rooms and turned off when no longer needed.

That’s where Celf1 comes in. Its molecular interactions with specific RNA in the lens initiate events that make it possible to break open the envelope of the nucleus and degrade the DNA within in order to allow light to reach the retina properly.

When Celf1 is absent or deficient, serious eye disorders, including cataracts at birth, result.

“The whole process is very complicated and regulated very tightly,” said Archana Siddam, who recently earned her doctorate in Lachke’s lab and was the co-lead author on the PLOS Genetics article. “And this project sheds light on the molecular mechanism behind this complex process. We knew the lens gets rid of the nucleus, but we didn’t know the control mechanism. This sheds light on how exactly it is degraded, what genes are involved and that Celf1 is the factor that orchestrates the whole process.”

Part of the same process is critical to cell division and development – but in those cases it does not degrade the nucleus. Instead, it remodels its envelope so that the duplicated DNA can be evenly distributed to two daughter cells. This new information about Celf1 is sure to provide new traction in other cellular research, including cancer studies.

Mello, who shared the 2006 Nobel Prize in Physiology or Medicine with Andrew Fire for their discovery of RNA interference, said he has followed Lachke’s “exciting work” since 2012, when Lachke was awarded a prestigious fellowship from the Pew Charitable Trusts – the first awarded to a UD researcher. Mello was a Pew recipient in 1995 and now chairs the national advisory committee that selects Pew’s biomedical scholars.

“Clearly Delaware has been doing an amazing job recruiting young faculty,” Mello wrote, “as Delaware has had two additional Pew Scholarships awarded already since then – one to Dr. April Kloxin and one to Dr. Catherine Grimes.”

Lachke’s research provides important new insight in a critical field of research, said Mello, distinguished professor in the University of Massachusetts Medical School’s Program in Molecular Medicine and an investigator with the Howard Hughes Medical Institute.

“Cataracts are a major cause of blindness and Dr. Lachke’s work is providing fundamental new knowledge on the basic underlying mechanisms involved in eye development,” Mello wrote. “This is extremely important work.”

And there is much more to do, Lachke said.

“This is relatively unexplored territory,” Lachke said. “Of about 1,500 RNA-binding proteins, fewer than 100 are currently known to be directly linked to disease. We have now linked Celf1 to cataract eye disease. This will inform ophthalmic geneticists to look closely at Celf1 for possible mutations in individuals with cataracts at birth, and it will also inform cancer biologists to look into Celf1 as a candidate that can impact key factors involved in cancer.”

The research was supported by grants from the National Institutes of Health and Retina France.

“Science is all about collaboration,” said Siddam, who now is working as a Commissioner’s Fellow in the U.S. Food and Drug Administration’s Winchester, Massachusetts office. “That’s something Salil fosters in all of his graduate students. I’m glad I had the opportunity to work in that environment. We worked as a team with those in France and Pittsburgh – and that was so wonderful. We learned so many things from each other and the scope got bigger because of all the contributions.”