Injured at the beach

Injuries to people swimming at the beach are common and severe, according to an ongoing study by the Delaware Sea Grant College Program and Beebe Medical Center.

A total of 1,121 injuries requiring emergency department treatment were recorded in Delaware during the past three summers for patients hurt by ocean waves. Injuries range from simple sprains and strains to extremity fractures, blunt organ trauma and fractures of the cervical spine. There were three fatalities attributed to surf zone injuries during the study period. The most common ailments were broken collarbones, dislocated and separated shoulders, neck pain, and ankle and knee sprains.

“Historically, the magnitude of these injuries is largely underreported,” said Beebe Chief of Emergency Medicine Paul Cowan, who led the study with Delaware Sea Grant’s Wendy Carey. “This is the first study that documents and tracks the number of significant injuries occurring in the surf zone.”

The researchers worked with lifeguards at three Delaware communities — Bethany, Dewey and Rehoboth — and state park beaches at Cape Henlopen and Indian River Inlet to correlate data on beach conditions with patients reporting for emergency treatment at Beebe facilities. 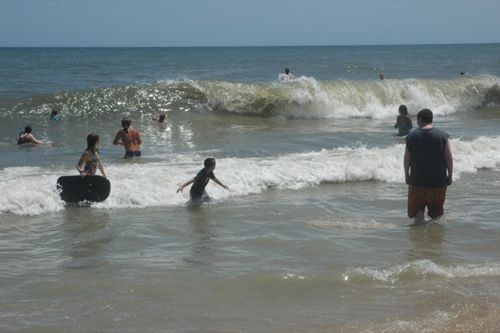 Playing in the surf turns into a trip to the hospital for hundreds of Delaware beach goers each year, according to new research. Photo by Wendy Carey

Those injured were hurt in the part of the beach where many people play in the waves, called the surf zone: the stretch of shoreline between water’s edge and where the waves break. Unlike rip currents or deep water, which pose a threat of drowning, surf zone hazards can cause blunt trauma when beach goers are hit by a wave and slammed into the sand. Most of the injuries occur in less than 2 feet of water.

“So this leads us to believe that a lot of these folks simply don’t understand the power of the ocean, or they don’t know how to swim in ocean waves and currents,” Carey said.

The objective of the project is to increase understanding of weather, ocean and beach conditions and swimmer’s activities that are most likely to result in surf zone injuries. The researchers merge data from medical records with environmental data, seeking ultimately to reduce injury occurrence — possibly through targeted education and outreach, improved surf zone forecast or beach patrols being more alert to warning conditions.

The data seem to show that surf zone injuries occur in clusters. For many years, the staff at Beebe’s Emergency Department noticed that bathers injured in the surf arrived in waves, some days with five to 10 patients arriving together in a few-hour period, followed by days with few or no injuries. Over the three-year study period, there were zero injuries reported on 21 percent of the days, with five or more injuries per day reported 26 percent of the time. At a maximum, there were 25 injuries recorded on a single day.

Injury occurrence does seem to be related to wave height, but proportionally there might be fewer people using a beach when waves are especially rough. The researchers worked with beach patrols to get an estimate of the number of people using the water each day, and the data were adjusted to take the daily population into account.

The cluster days all had waves of greater than 1.5 feet and a lot of people in the water. Most injuries occurred on Saturday and Sunday between noon and 4 p.m., which is likely reflective of when there are more people at the beach and in the water.

Surprising researchers, the average age of patients ranged from 33 to 38 and one-third of all injuries occurred in swimmers over the age of 45. Most traumatic injuries in this country occur to much younger individuals.

The researchers collected ZIP Code information to plot geographic distribution of home addresses. Most were from the Mid-Atlantic, with many from southern Delaware — populations perhaps most likely to make frequent trips to the beach.

Local paramedics and the Delaware Department of Natural Resources and Environmental Control contributed information to the study, and Doug Miller, associate professor in UD’s College of Earth, Ocean, and Environment, synthesized the statistics. Next, the team will get more information this summer and look for the combination of variables to help predict dangerous conditions in the surf zone.

They may work with local agencies and organizations to share safety tips about how swimming in the ocean is very different from swimming in a pool. Carey recommends swimming at beaches with lifeguards and talking to them about conditions for the day.

She also recommends the very simple advice of never turning your back to the waves. Many of the injuries occurred when bathers were knocked to the bottom by waves hitting them as they attempted to leave the water.

She and her colleagues may also work with regional and national organizations to increase awareness of surf zone injuries beyond Delaware’s 25 miles of coastline.

“If there are that many occurring here in Delaware, we wonder what’s happening up and down the Eastern Seaboard and other locations,” Carey said.