A research group at the University of Delaware has achieved a breakthrough in the emerging field of “Group IV Semiconductor Optoelectronic Devices.”

The UD research team, led by James Kolodzey, demonstrated that it is possible to use a combination of germanium and tin (GeSn) to create a light emitting diode (LED) that operates in the infrared spectrum, wavelengths invisible to the naked eye.

Optoelectronics is a branch of engineering that uses hardware devices to convert signals and usable energy from electronics to light. Examples of optoelectronic devices include solar cells, light-emitting diodes and optical fiber communication systems. Group IV semiconductors are devices made from Group IV elements found in the periodic table, namely carbon, silicon, germanium, tin and lead.

Until now, researchers were uncertain if germanium and tin were capable of efficient light emission. Kolodzey’s team, however, showed clear and efficient performance in the mid-infrared spectrum. Fabricated and characterized on campus, the UD-created device functions like the semiconductors found in LED flashlights sold in hardware stores, but in the infrared, rather than the visible, wavelength range.

The mid-infrared spectrum is important for applications such as medical scanning and diagnostics, the remote sensing of biochemicals, communications and signaling, and security technology.

“Our UD group is one of the few in the world working in this new field, and by using tin we have achieved an operating LED device with higher power output and longer wavelength operation than any previous reports or publications in this area,” said Kolodzey, Charles Black Evans Professor of Electrical and Computer Engineering. 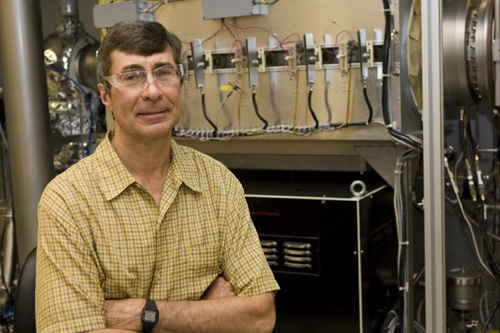 An optoelectronics breakthrough by a UD research team led by James Kolodzey may advance the development of mid-infrared light sources and lasers. Image credit: University of Delaware

The Kolodzey research group first began growing GeSn samples in the lab using molecular beam epitaxy about three years ago. As they added increasing amounts of tin, they noticed that the optical wavelengths became longer, fundamentally changing the energy of the electrons present and increasing the spacing between the atoms.

“If you want to generate infrared signals, we’ve shown that using a combination alloy that includes germanium and tin provides a significantly higher power equivalent than using germanium alone. Specifically, we’ve shown that when tin concentrations in the alloy reach 6 to 7 percent, the light emitted from the alloy increases dramatically,” he said.

The team’s results suggest that GeSn-based materials maybe useful for practical LEDs operating in the infrared at wavelengths near two micrometers, which is just below the visible spectrum.

The work may have health care applications, Kolodzey said, particularly in the detection of skin cancer. “Germanium-tin alloys may provide a new diagnostic tool for illuminating skin tissue and detecting skin changes visible only in the infrared spectrum. It may also have dental applications,” he said.

Kolodzey and his team are creating and testing further samples to determine the exact proportions of germanium and tin needed to achieve the best performance. Understanding how the wavelengths change as more tin is added is also important, Kolodzey said, because the more tin used, the more the energy wavelength moves from the visible to the infrared spectrum.

Ultimately, Kolodzey said he hopes to develop a GeSn mid-infrared laser that provides higher output power and a more easily controlled beam than an LED and that could be useful to develop new drugs and polymers, or for laser surgery techniques because the infrared lacks the harmful effects of some other light wavelengths.

“This is an important first step,” he said.

Co-authors on the paper include UD graduate students Nupur Bhargava, Jay Prakash Gupta and Sangcheol Kim, and Thomas Adam, a collaborator from the University at Albany-State University of New York (SUNY). The research is funded in part by the Air Force Office of Scientific Research.