EAST LANSING, Mich. — A Michigan State University astronomer is part of an international team of scientists that has discovered a galaxy so far, far away that its light was emitted not all that long after the Big Bang occurred.

The research of MSU’s physics and astronomy professor Megan Donahue and colleagues is detailed in the recent issue of the journal Nature. They found that this galaxy began emitting light “just” 490 million years after the Big Bang, when the universe was only 3.6 percent of its present age.

Based on images taken in several colors, or wavelength bands, and using NASA’s Hubble Telescope and Spitzer Space Telescope, the measurement is “one of the most accurate estimates ever obtained” for a galaxy from the early universe, Donahue said. 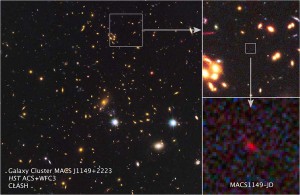 The photo on the left is a collection of galaxies that make up a cluster known as MACS J1149 2223. The two shots on the right are a partial zoom-in and a deeper zoom of a galaxy which is believed to have been formed shortly after the Big Bang. Photo from the Space Telescope Science Institute.

The astronomers were able to spot the galaxy by using a rare cosmic zoom lens in which the gravity of a large mass magnifies light from objects in the distant background.

By taking advantage of the space-based telescopes, both man-made and natural, the galaxy appears 15 times brighter than it otherwise would. The researchers were able to calculate that the body is less than 200 million years old, with the mass of its constituent stars weighing in at only 1 percent that of the Milky Way.

“The discovery of this extremely distant galaxy was made possible not only by the Hubble Space Telescope, but by the giant ‘gravitational lens in the sky’ of the cluster of galaxies that sits between us and that galaxy,” Donahue said. “The cluster magnifies the light of this relatively ordinary galaxy so we can see it with Hubble.”

The team used a Hubble survey called CLASH (Cluster Lensing and Supernova Survey with Hubble) to find the galaxy, which has been dubbed MACS 1149-JD. 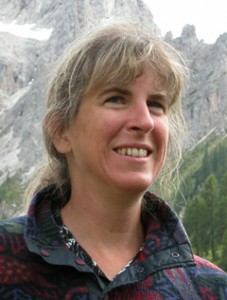 MSU physics and astronomy professor Megan Donahue is part of a team of astronomers that discovered one of the earliest-formed galaxies in the universe. Image credit: Michigan State University

CLASH has been using the space-based telescopes to study about 25 galaxy clusters in its search for what is known as “dark matter” – a form of matter that neither emits nor reflects light. Astronomers know of its existence due to the gravitational effects it has on visible matter such as stars and galaxies.

Because of the nature of cosmic expansion, light emitted by distant galaxies is shifted to longer, or redder, wavelengths than the light emitted by nearby bodies. The scientists estimate that MACS1149-JD1 has a redshift of 9.6, similar to other galaxies that are candidates for being extremely remote.

The galaxy is located in the northern hemisphere sky, in the vicinity of the constellation Leo.

“It’s quite exciting to get a peek at the way the universe was within only 490 million years after the Big Bang,” Donahue said. “Apparently it doesn’t wait around very long to start making stars and galaxies.”